Dr. David Neiman explores the historicity of the Biblical accounts of Joseph and the Exodus from Egypt.

Joseph rises to the position of "Tzafnat Pa'aneakh" after successfully helping the Pharaoh of Egypt with his economic plans. Under Joseph's guidance all land became the property of Pharaoh.

A new Pharaoh comes to power who does not favor the Israelites. They are enslaved and forced to build the storage cities of Pithom and Ramses. These cities were arsenals for the armies of Egypt. Under Seti I and Ramses the II, Egypt was on the warpath.

Ramses II was defeated at the battle of Kadesh by the Hittites. The loss of the largest Bronze Age army in history weakened Egypt and that vulnerability created the conditions in which the Israelite flight from Egypt could occur.

Joseph and The Exodus | Dr. David Neiman explores the historicity of the Biblical accounts of Joseph and the Exodus from Egypt | Published on Jan 27, 2016 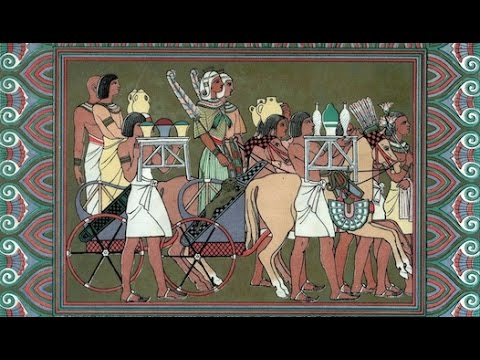 Genuinely awful, grossly amateurish, Neiman self-describes as an historian after forty minutes of screwing up everything and someone asks, "what about the Plagues?"

Joseph and Potiphar
by Immanuel Velikovsky

[R]ealizing that the sojourn of the Israelites in Egypt took place not during the New Kingdom but during the preceding Middle Kingdom, in order to find out whether the personality of Joseph or the patron of the early stage of his career, Potiphar, is referred to in the historical documents, we have to look into those of the Middle Kingdom. The task appears simple. According to the Book of Genesis Potiphar was "an officer of Pharaoh, captain of the guard." In the register of the private names to the Ancient Records of Egypt by James Breasted, we find the name Ptahwer. Ptahwer was at the service of the Pharaoh Amenemhet III of the Twelfth Dynasty of the Middle Kingdom. According to an inscription of Ptahwer at Sarbut el-Khadem in Sinai dated in the forty-fifth year of Amenemhet III, his office was that of "master of the double cabinet, chief of the treasury." ...Since there is only one Ptahwer in the historical documents, and since he lived in the time when we expect to find him, we are probably not wrong in identifying the biblical Potiphar with the historical Ptahwer... In the days of Amenemhet III there occurred in Egypt a famine enduring nine long years... Thus it seems that the Pharaoh in whose days was the seven years' famine was the successor of the Pharaoh in whose days began the rise of Joseph's career (if Yatu is Joseph). Potiphar, who lived under Amenemhet III, probably lived also under his successor. The inscription which deals with Ptahwer mentions a man whose name is transliterated by Breasted as Y-t-w. Among the monuments of Amenemhet III's reign is one of the Storekeeper who was honored together with two other persons... If we remember that according to the Scriptural narrative Joseph was appointed storekeeper of the State (Gen. 41:40-41) in anticipation of the seven lean years, with the powers of a chief Minister of State or Vice-King, we may suspect in Yatu the Biblical Joseph. In the Scriptures it is said that his name was changed by Pharaoh to Zaphnath-paaneah, but still his original name may have been in use until he became next to the Pharaoh in importance.

Rohl (in "Pharaohs and Kings") follows Kenneth Kitchen that Zaphnath-paaneah translates as "he who is called Pa'aneah", and that Pa'aneah was really Ipiankhu, a name common in the Middle Kingdom but "'not any later.'" His Biblical wife Asenath was named "Ius-en-at ('she belongs to you')". [p 350]

Genuinely awful, grossly amateurish, Neiman self-describes as an historian after forty minutes of screwing up everything and someone asks, "what about the Plagues?"

Genuinely awful, grossly amateurish, Neiman self-describes as an historian after forty minutes of screwing up everything and someone asks, "what about the Plagues?" One of *those* topics.

From the online Jewish Encyclopedia:

Name given by Pharaoh to Joseph (Gen. xli. 45). It seems to be an Egyptian name, but its etymology is in doubt. It is not plain on what (Hebrew ?) etymology the earliest explanations of Hebrew scholars were founded. Targum Onqelos gives the meaning of the name as "the man to whom mysteries are revealed"; pseudo-Jonathan, "one who reveals mysteries"; Josephus ("Ant." ii. 6, § 1), "a finder of mysteries." Many other old writers offer similar definitions, and even the A. V. has in the margin: "Which in the Coptic signifies, 'A revealer of secrets,' or 'The man to whom secrets are revealed.'" There is, however, no Egyptian etymology by which these guesses can be supported. Jerome claims that his suggestion, "savior of the world," rests on the Egyptian, and possibly the reading of the Septuagint has been followed by the authors of this etymology; the Coptic "eneh" = Egyptian "n?" (= "eternity," "eternal"), seems to be discernible, to which erroneously the later meaning of the Hebrew "'olam" ("eternity," "age"; later, "world") has been given, overlooking the "'ayin." Thus this inadmissible interpretation, which is accepted even by Jablonski, clearly betrays rabbinical influence.

Modern Egyptologists have tried a great many untenable etymologies for the element "Zaphnath," but have mostly agreed that "paaneah" contains the Egyptian "p-ôn?," meaning "the life" (thus first Lepsius, "Chronologie," i. 382). Steindorff's explanation (in "Zeitschrift für Aegyptische Sprache," xxvii. 42; modifying Krall's etymology in "Trans. 7th Orientalist. Congr." p. 110) differs somewhat; it is "?e(d)-p-nute(r)-ef-on?" = "the god speaks, [and] he lives." This has become popular, and is philologically possible; however, it does not convey the allusion to Joseph's office or merits which we should expect. "P-ôn?" (= "the life") would still answer better in this respect; only "Zaphnath" does not admit a quite convincing explanation. The Septuagint (Yon[or Yom]qomfan‹¯) and the Hexaplaric versions, however, differ so widely from the Hebrew in the first half of the name that it may have been disfigured by copyists.

Isn't that Rosie O'Donnell in the turban?

I was on a ship, in bed, holding over my head and reading a 5Lb 2 0z Standard Handbook for Mechanical Engineers. I fell asleep and the book fell on my face and woke me. I don’t read like that anymore.

Most Christians believe Joseph prefigured Jesus Christ, or was a “type” of him. An example: in this present period of time before his second coming, Christ is “at the right hand of God” awaiting all enemies to be put under his feet - as Joseph was in Egypt.

Events caused his family back in Canaan to come to Egypt, to their surprise, their brother whom they thought surely dead, was very much alive, and not only so, Lord over Egypt. Like Christ is today since his resurrection, reigning as Lord over those (mostly us Gentiles, at least so far) who believe in him.

12 posted on 02/17/2019 7:14:17 PM PST by sasportas
[ Post Reply | Private Reply | To 1 | View Replies]
To: SunkenCiv
Somewhat related, filmmaker Timothy Mahoney, producer of Patterns of Evidence: Exodus, from your Exodus list above, is releasing a sequel in March: Patterns of Evidence: The Moses Controversy (Long Trailer with dates)

Thanks, good to know. I saw the P of E in Imax on its special premiere event, and while sitting through the long "how I got to this point" beginning and middle was a little boring for me, I still enjoyed it enough to get it on disk. I will in time get around to getting the David Rohl presentations on disk. :^)

This are the topics about Ridley Scott's crap movie. As a director, he's a hell of a cinematographer.

Step three, of course, will be to combine "theexodus" and "exodus" as edited, to trim out the duplicates and produce a single comprehensive list. Don't hold your breath. :^)

Michael Sanders:
Mike Sanders’ Revised Chronology -1826 to 1397- and The date of the Exodus
(I recall a comment from Sanders in which he mentioned that he had Donovan Courville’s original research notes and such)
http://www.angelfire.com/ma/mhetjf/vieuxsite/chron1.html

Scarab in the Dust:
Egypt in the Time of the Twenty-First Dynasty
Martin Sieff
http://www.starways.net/lisa/essays/scarab.html 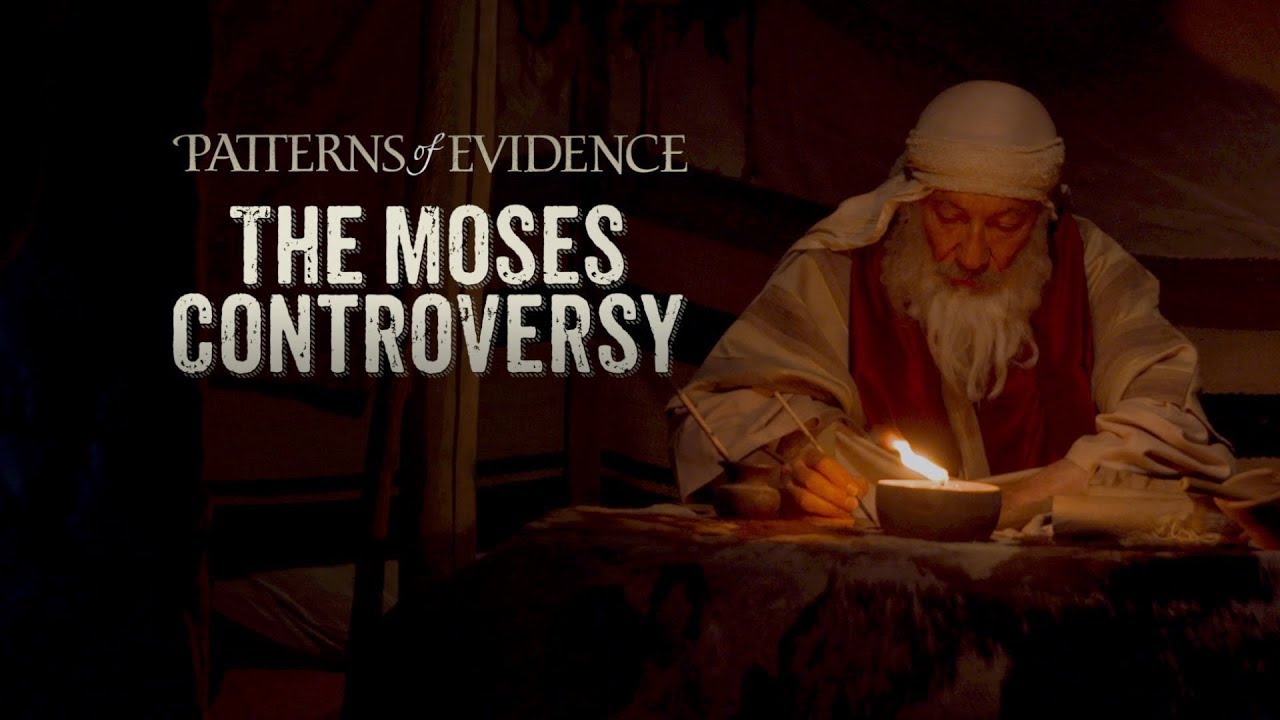