BRUSSELS, Belgium (AP)--A U.N. panel created to recommend how the Internet should be run in the future has failed to reach consensus but did agree that no single country should dominate.

The United States stated two weeks ago that it intended to maintain control over the computers that serve as the Internet's principal traffic cops.

In a report released Thursday, the U.N. panel outlined four possible options for the future of Internet governance for world leaders to consider at a November "Information Society" summit.

One option would largely keep the current system intact, with a U.S.-based non-profit organization, the Internet Corporation for Assigned Names and Numbers, continuing to handle basic policies over Internet addresses. At the other end, ICANN would be revamped and new international agencies formed under the auspices of the United Nations.

"In the end it will be up to governments, if at all, to decide if there will be any change," said Markus Kummer, executive director of the U.N. Working Group on Internet Governance, which issued the report.

The 40 members of the panel hailed from around the world and included representatives from business, academia and government.

World leaders who convened in December 2003 for the U.N. World Summit on the Information Society in Geneva couldn't agree on a structure for Internet governance. Some countries were satisfied with the current arrangement, while others, particularly developing ones, wanted to wrest control from ICANN and place it with an intergovernmental group, possibly under the United Nations.

Leaders ducked the issue and directed U.N. Secretary-General Kofi Annan to convene the working group to come up with a proposal for the second and final phase of the summit, in Tunisia in November.

Though the group could not agree on a single model, it does recommend the creation of a new global forum for governments, industry and others to discuss key issues such as spam and cybercrime--areas not currently handled by ICANN.

The panel recommended a larger international role for "governance arrangements," Kummer said, and participants felt no one country should dominate.

He stressed the sentiment dates back to the Geneva summit and was not meant as an attack on the United States or a direct response to the U.S. Department of Commerce statement two weeks ago that it intends to keep ultimate authority for authorizing changes to the list of Internet suffixes, such as ".com."

The United States historically has played that role because it funded much of the Internet's early development.

"The group as a whole recognizes that it is clear the U.S. has played a beneficial role," Kummer said.

"If the Internet was a postal system, what we ensure is that the addresses on the letters work," he said. "We don't think we're a regulator. We think we're a technical co-ordinator."

Twomey said ICANN had a narrow technical coordination role for a particular layer of the Internet - specifically domain names and the numeric Internet Protocol addresses used to identify specific computers.

But ICANN critics believe the organization has drifted beyond its technical mandate. They have cited ICANN's growing budget and its involvement in creating procedures for resolving trademark dispute as examples.

Paul Kane, chairman of a Brussels-based coalition of domain name administrators called the Council of European and National Top-Level Domain Registries, said the report told ICANN diplomatically that it needed to narrow its focus.

"Keeping things focused means not having a massive budget, having a well-defined scope and a well-defined mission," Kane said. "They have neither. They're not following their original remit."

Others have expressed concerns that ICANN remains too close to the U.S. government, which gave ICANN its authority in 1998 but retains veto power.

Developing countries have been frustrated that Western countries that got on the Internet first gobbled up most of the available addresses required for computers to connect, leaving developing nations to share a limited supply.

And some countries want faster approval of domain names in non-English characters--China even threatened a few years ago to split the Internet in two and set up its own naming system for Chinese.

As far as I am concerned, if another country wants to build the appropriate infrastructure, let them...to do it my UN mandate is simply ridiculous.

By all means, go right ahead.

Check out my posting yesterday on the Dissolution of Privacy in America.

Could it be that this is a probable source of where these lists are originating from?

UN wants to control the Internet.

UN is not much more than a source to scam Nations and enrich those who have positions or relatives in the UN. [Remember Food for Oil? Kofi's son's personal gain?]

Eventually, we will see the UN wanting reparations (from the wealthy Nations, of course) for worldly ills that long pre-dated the establishment of the UN. Hey, shakedowns have been working for Jesse Jackson for decades.

Remember, that's where there non-security issues are governed.

Yep, the US would be outvoted by Algeria and Zimbabwe.

my guess is a president like hillary would allow the u.n. control over the internet in order to subdue her opposition.

meanwhile, the u.n. would love control for the purpose of raising an international sales tax.

When it comes to the UN, I have three words: Oil For Food.

this is about sovreignty, again.......canada and australia URL's are sovereign in that they contain a dot-ca or au.....adding a dot-us URL component would be cheap and easy, and wouldn't give up another piece of sovreignty to globalists.

They can start their own internet if they want to.

I have three words for the U.N. too, but much stronger, so I will just use letters.

They're really desperate to take control of the Internet from the US (where it was invented) in order to control the flow of information to the Plebes, who'd stop dreaming of freedom as long as all the dirty propaganda outta the US (like FR) can be banned. It's for the children.

I love how the headline frames the story as if it were just a simple question of fairness. Should one country control the Internet? Gosh, no, that's unfair. Then hand it over to the UN.
Good grief.

Since the internet was invented by none other than our resident genius, Al Gore, I feel the USA has every right and obligation to control it.

15 posted on 07/16/2005 7:10:25 AM PDT by F.J. Mitchell (Better a thousand Lawyers starve, than one innocent person pay for their caviar.)
[ Post Reply | Private Reply | To 1 | View Replies]
To: grundle
Developing countries have been frustrated that Western countries that got on the Internet first gobbled up most of the available addresses required for computers to connect, leaving developing nations to share a limited supply.

Hey dingbats at AP!
They can just wait for IPv6. 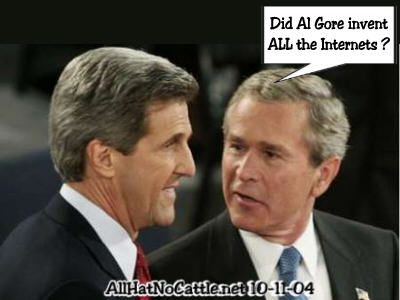 The word cyber, comes from the greek which originally meant a helmsman; one who governed a ship. In modern greek it means to govern.

A world government is coming, and it will start with the Internet.

dot US already exists and has for a long time. most countries have a Dot "country" such as de for germany, it for italy, etc.