English and Welsh are races apart 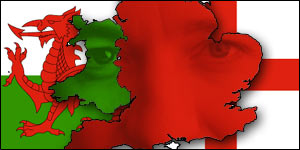 Gene scientists claim to have found proof that the Welsh are the "true" Britons.

The research supports the idea that Celtic Britain underwent a form of ethnic cleansing by Anglo-Saxons invaders following the Roman withdrawal in the fifth century.

Genetic tests show clear differences between the Welsh and English

It suggests that between 50% and 100% of the indigenous population of what was to become England was wiped out, with Offa's Dyke acting as a "genetic barrier" protecting those on the Welsh side.

And the upheaval can be traced to this day through genetic differences between the English and the Welsh.

Academics at University College in London comparing a sample of men from the UK with those from an area of the Netherlands where the Anglo-Saxons are thought to have originated found the English subjects had genes that were almost identical.

But there were clear differences between the genetic make-up of Welsh people studied.

The research team studied the Y-chromosome, which is passed almost unchanged from father to son, and looked for certain genetic markers.

They chose seven market towns mentioned in the Domesday Book of 1086 and studied 313 male volunteers whose paternal grandfather had also lived in the area.

They then compared this with samples from Norway and with Friesland, now a northern province of the Netherlands.

The researchers concluded the most likely explanation for this was a large-scale Anglo-Saxon invasion, which devastated the Celtic population of England, but did not reach Wales.

Dr Mark Thomas, of the Centre for Genetic Anthropology at UCL, said their findings suggested that a migration occurred within the last 2,500 years.

It reinforced the idea that the Welsh were the true indigenous Britons.

In April last year, research for a BBC programme on the Vikings revealed strong genetic links between the Welsh and Irish Celts and the Basques of northern Spain and south France.

It suggested a possible link between the Celts and Basques, dating back tens of thousands of years.

The UCL research into the more recent Anglo-Saxon period suggested a migration on a huge scale.

"It appears England is made up of an ethnic cleansing event from people coming across from the continent after the Romans left," he said.

Archaeologists after the Second World War rejected the traditionally held view that an Anglo-Saxon invasion pushed the indigenous Celtic Britons to the fringes of Britain.

Instead, they said the arrival of Anglo-Saxon culture could have come from trade or a small ruling elite.

But the latest research by the UCL team, "using genetics as a history book", appears to support the original view of a large-scale invasion of England.

It suggests that the Welsh border was more of a genetic barrier to the Anglo-Saxon Y chromosome gene flow than the North Sea.

Dr Thomas added: "Our findings completely overturn the modern view of the origins of the English."

I guess I'm stupid. I thought this was the way it worked all along. I didn't realize it was a controversy.

FWIW, I think now the Welsh need to go to the ICC, and sue the English for "reparations."

5 posted on 07/04/2002 5:37:37 PM PDT by Illbay
[ Post Reply | Private Reply | To 1 | View Replies]
To: blam
I've read in many places that the descendants of the Irish and the Scots migrated from the Middle East (Anatolia/Turkey) thru Spain and wound up in the British Isles, starting in the BC era. This would seem to agree with the genetic link between the Welsh, the Scots/Irish and the Basque's of Spain.

The similarities dont end there either.

The ancient Gaelic language of Scotland and Ireland seems to come from the original Gallic language of Gaul in southern Europe and Galatia, where the Gauls established colonies in Turkey as mercenaries for the Roman empire. You may recall St. Paul's book to the Galatians as a biblical reference to these people.

It's always interesting to see how these items tie together.

That makes two of us. We must have had the same history book.

It would be interesting to check the DNA for the maternal line.

To: blam
Aren't we told there are NO differences between races, especially white and black..... now they're saying there are differences between Welsh and English..... hmmm
9 posted on 07/04/2002 5:49:47 PM PDT by Minutes
[ Post Reply | Private Reply | To 1 | View Replies]
To: keithtoo
The Celts apparently originated in Central Europe and moved both southeast, towards Galatia in Anatolia, and south and west, into Britain, Ireland, Gaul, Italy and Spain.

They later were pushed out of their original home in Central Europe by incoming Germans, apparently from Scandinavia.

13 posted on 07/04/2002 5:56:32 PM PDT by chilepepper
[ Post Reply | Private Reply | To 1 | View Replies]
To: blam
As the Anglo-Saxon ethnic cleansing proceeded, a large body of Britons set sail under the leadership of four primary lords and landed in an otherwise depopulated Brittany. Another large body of Britons from Cornwall sailed due South to Galiza. This was under a different lord who became known as King San Cho Noe I. He took over Carvajal (Kingdom of McWallace) and founded Castile and Leon.

Leastwise that's been my understanding from our history as portrayed in the King Arthur stories.

Interesting that this genetic study demonstrates their truthfulness.

The "King Arthur" stories might more properly be called "Annals of the Kings of Briton".)

14 posted on 07/04/2002 5:56:43 PM PDT by muawiyah
[ Post Reply | Private Reply | To 1 | View Replies]
To: keithtoo
"I've read in many places that the descendants of the Irish and the Scots migrated from the Middle East (Anatolia/Turkey) thru Spain and wound up in the British Isles, starting in the BC era. "

To: blam
BRITS OUT OF BRITAIN!