In a laboratory in the upper recesses of the American Museum of Natural History, away from the public galleries, Dr. Ian Tattersall, a tall Homo sapiens, stooped and came face to face with a Neanderthal man, short and robust but bearing a family resemblance — until one looked especially closely.

A paleoanthropologist who has studied and written about Neanderthals, Dr. Tattersall was getting his first look at a virtually complete skeleton from this famously extinct branch of the hominid family. Nothing quite like it has ever been assembled before, the foot bones connected to the ankle bones and everything else up to the cranium.

It is, the museum says, the first composite reconstruction of a full Neanderthal skeleton based on actual fossils.

Dr. Tattersall's initial reaction was visceral, then more analytical. "For the first time, I really feel I have met a Neanderthal," he said. "He was so much like us, but actually quite different."

Examining the upright skeleton, Dr. Tattersall disputed the notion, once current even among some scientists, that Neanderthals may have been so humanlike that if dressed in contemporary clothing, they could have passed unrecognized on the subway. This impression has been characterized in popular cartoon figures of a heavy-browed Neanderthal in a jaunty fedora.

"This definitely is its own species," Dr. Tattersall affirmed, glancing first to the Neanderthal and then to a modern human skeleton next to it. "If people didn't believe that before, by all rights they should now."

Standing 5 feet 4 1/2 inches, thought to be a typical height of a Neanderthal man, the skeleton will be on display at the museum, in New York City, in an exhibit opening on Jan. 11. Showmanship as well as science was behind the skeleton's creation.

These prehistoric people, who lived mostly in Europe and parts of central and southwestern Asia, vanished about 30,000 years ago. Since the first of their fossils were recognized in 1856, Neanderthals have been objects of mystery and endless conjecture. They are, in many respects, the dinosaurs of hominid studies.

Like the fate of the dinosaurs, their extinction has kept scholarly mills grinding out imaginative theories. Similarly, popular culture often treats Neanderthals as the personification of obsolescence. They are the brutes of caveman caricature (sometimes, anachronistically, sharing the turf with hulking dinosaurs).

They have been maligned as an inferior breed not smart enough to survive, even though Neanderthals apparently managed well in challenging climates for more than 200,000 years — longer than the 125,000 to 150,000 years modern Homo sapiens have been around so far.

One reason for the misunderstanding is that not a single remotely complete skeleton of a Neanderthal has turned up. The many artistic recreations, though commonplace and more lifelike than skeletons, invite scientific criticism as being projections of particular interpretations of Neanderthal appearances and behavior. A less subjective study, scientists say, starts with anatomy — with the skeleton.

Dr. Erik Trinkaus, a Neanderthal specialist at Washington University in St. Louis, who was not involved in the project, said the skeleton reconstructions were especially important for computer models of Neanderthal biomechanics, the way they stood, walked and ran.

So technicians at the museum, working with the skill and patience of reconstructive surgeons, assembled a full skeleton from the exact casts of fossil parts from several specimensfound in Europe and the Middle East.

"The whole skeleton is in essence a transplant," said Gary Sawyer, a senior technician in anthropology, who directed the reconstruction.

Mr. Sawyer and other technicians began developing their skills several years ago with the reconstruction of Peking Man, a Homo erectus from China. Their goal is to recreate skeletons of about 20 hominid species.

Last summer, they finished a prototype Neanderthal skeleton and have since added more body parts for the new version. With so much work and thought invested in their creation, they now wish they could give it an appropriate sobriquet. Any suggestions?

Up to 90 percent of the amalgamated skeleton is made from polyurethane replicas based on actual fossils. These are stained a yellowish brown, the color of most excavated fossils. A few parts, particularly cartilage associated with the rib cage, are inferred by context. All such parts are colored gray.

"This was not the easiest thing to do," Mr. Sawyer said. "There were not an awful lot of parts of Neanderthals available to us."

The museum borrowed fossil casts from several institutions. The ribs, spine and some pelvic bones, among other parts, were derived from a 60,000-year-old Neanderthal found at Kebara cave in Israel.

Anatomically modern humans may have seen their first Neanderthals in what is now Israel some 90,000 years ago. They occupied the same region from time to time, and it is tempting to imagine their shock of recognition. Like long-separated cousins, they probably searched each other's faces and physiques for contours of their shared ancestry.

The two surviving groups of the hominid family came in more frequent contact in Europe, beginning 40,000 years ago. Each made stone tools, used fire and had equally large brains. But the Neanderthals, longtime Europeans, were robust with heavy brow ridges and forward-projecting faces. The modern humans, presumably migrants from Africa, were taller and lighter-boned with smaller, less protruding faces. Still, there was a family resemblance.

The museum technicians drew on fossils from the site in La Ferrassie in France for much of the rest of the skeleton, notably the skull. Some leg and arm bones and pelvic parts were created from the original specimen, discovered in a limestone quarry in the Neander Valley of Germany.

The Neanderthals apparently made their last stand in the Iberian peninsula less than 30,000 years ago. The causes of their extinction are still debated. Did modern humans outcompete them for resources? Kill them in combat? Breed with them, so that some of their genes lived on, as they were replaced as a recognizably separate people?

Looking at the reconstructed skeleton, Dr. Tattersall said it was clearer than ever that Neanderthals were not a human subspecies but a separate hominid species, Homo neanderthalensis, a view held by many paleontologists. Dr. Tattersall is the author, with Dr. Jeffrey Schwartz of the University of Pittsburgh, of "Extinct Humans." (Westview Press, 2000).

Dr. Tattersall's eye ran over the anatomical differences. The Neanderthal's shoulders are wider than a human's. The pelvis is also wider, even in males. Some scientists once suspected that the wide pelvis enabled Neanderthals to carry a child longer than nine months, giving birth to larger, more developed infants. But that view is now doubted.

The Neanderthal has shorter forearms and shins, a broader trunk and virtually no waist. The rib cage is a pronounced difference; instead of tapering off, as in humans, it is large and more bell-shaped. And there is the heavy brow ridge, sloping forehead and forward-projecting face.

Attached at the skeleton's neck is a small hyoid bone, which would have anchored the muscles of the tongue and other parts of a voice box apparatus. Found at Kebara cave, this hyoid is a slightly enlarged version of the human hyoid and nothing like similar bones in apes. Some scientists see this as evidence that Neanderthals may have had some capacity for articulate speech.

Dr. Tattersall is skeptical. He thinks Neanderthals had "an essentially symbol-free culture," meaning that they probably lacked the cognitive ability to reduce the world around them to symbols expressed in words and art. In contrast, the Cro-Magnons, as their contemporary modern humans in Europe are called, were creating dazzling art on their cave walls, evidence of a major advance in abstract thought and presumably articulate speech.

Dr. Trinkaus of St. Louis insists that the behavioral attributes of Neanderthals are an open question. They were clearly different anatomically from modern humans, he said, but "the unresolved issue is how important are those differences in Neanderthal behavior — how elaborate was their language or their social systems, what do the differences mean." (Dr. Trinkaus wrote "The Neandertals" (Knopf, 1993) in collaboration with Dr. Pat Shipman, now affiliated with Pennsylvania State University.)

However much Neanderthals and modern humans differed, Dr. Tattersall said: "What Neanderthals did, how they managed in extreme environments, they did very well. It was only Homo sapiens, it seems, that they couldn't cope with."

The Neanderthal skeleton will be part of "The First Europeans: Treasures From the Hills of Atapuerca," an exhibit of recent hominid fossil and artifact finds in northern Spain. These include material of Neanderthal ancestors dating back 800,000 years. The show was organized by Spanish scientists, with Dr. Tattersall as a co-curator.

Writing in the current issue of the magazine Natural History, one organizer, Dr. Juan Luis Arsuaga of the Complutense University in Madrid, said that reconstructions of hominids much more primitive than Neanderthals often seemed less startling, perhaps because they look something like living chimpanzees.

"But there is no familiar equivalent to the Neanderthal, so similar to us, so human yet so different," Dr. Arsuaga wrote. "To come across a Neanderthal, even a reconstructed one, is a thrilling experience. It was no doubt even more thrilling to our ancestors, who met them in the flesh." 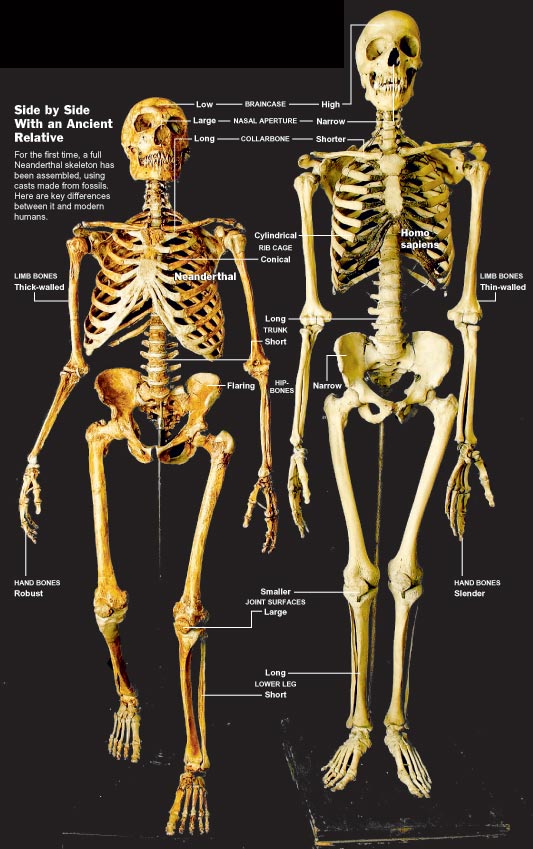 TOPICS: Culture/Society; Extended News; Miscellaneous; Unclassified
KEYWORDS: archaeology; crevolist; epigraphyandlanguage; evolution; garbage; ggg; godsgravesglyphs; helixmakemineadouble; history; homosapiens; humans; mangosalsa; multiregionalism; neandertal; neandertals; neanderthal; neanderthals; teadrinkernonsense Navigation: use the links below to view more comments.
first 1-20, 21-40, 41-60, 61-80 ... 101-108 next last
This is what the Times does better than anyone else. They are finally admitting that the most likely thing that doomed these squat hominids were our ancestors.

And it likely was not very pretty.

Happy New Year to all the ScienceFreeps and non-science Freeps!

[This ping list for the evolution -- not creationism -- side of evolution threads, and sometimes for other science topics. To be included, or dropped, let me know via freepmail.]

4 posted on 12/31/2002 4:45:44 PM PST by PatrickHenry
[ Post Reply | Private Reply | To 2 | View Replies]
To: Pharmboy
Dr. Tattersall's initial reaction was visceral, then more analytical. "For the first time, I really feel I have met a Neanderthal," he said. "He was so much like us, but actually quite different."

I don't think this guy gets out very much... I've been meeting Neanderthals for quite some time now...

Is that Happy New Year in Neander-talk?

Translated: There are no more Porsches in La Quinta (at least my area at the top of the cove)! 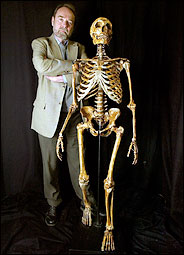 Here's Dr. Ian Tattersal with the reconstruction. Can you tell which is which?

13 posted on 12/31/2002 4:57:23 PM PST by Pharmboy
[ Post Reply | Private Reply | To 11 | View Replies]
To: Pharmboy
Well, I feel vindicated now:.....Dr. Tattersall disputed the notion, once current even among some scientists, that Neanderthals may have been so humanlike that if dressed in contemporary clothing, they could have passed unrecognized on the subway......

At least the phrase "Knuckle-draggin' neanderthal" might still be accurate for use as an analogy !!