Sen. Rand Paul (R-KY) is the latest GOP presidential candidate to jump on 2016 frontrunner Ben Carson's theory that the pyramids were created by the biblical figure Joseph to store grain.

"I'm really big into conspiracy theories, so I think they were probably built by the aliens as grain silos, donâ€™t you think," Paul joked, when asked about Carson's idea on 1110AM WBT, as reported by Buzzfeed.

Carson has defended the idea that the pyramids were built for grain storage -- not as pharaohs' tombs, as modern archaeology holds -- since Buzzfeed recently unearthed a video of the neurosurgeon making a 1998 commencement address referencing the theory. Donald Trump -- Carson's main rival -- has said he plans to use the idea against Carson.

On the radio show, Paul was also asked about a tweet Trump retweeted and then deleted that suggested former Gov. Jeb Bush (R-FL) was a Nazi.

â€œI think when you started out with maybe whether the aliens had built the pyramids, you had me, but then when you got to Nazism, I think youâ€™ve just gone too far,â€ Paul said.

Gentle Ben Carson may be onto something here. In the movie, “The Ten Commandments” starring pro-God, pro-gun Patriot Charlton Heston, grain was being stored in structures that looked a lot like pyramids.

I do not approve.

Both politically and in terms of character, I like the Ted Cruz approach - the Eleventh Commandment. I tend to hear Cruz speaking positively about his fellow republicans, even those for whom I find it hard to figure out why they call themselves republicans. At least when it’s a peripheral issue, we need to build up the GOP in public, as much as we may despise or be embarrassed by certain members in private.

In particular, Carson is not my top choice or close to it, but I’d like (1) to have his supporters vote for Cruz/Trump in the general election, rather than being alienated and staying home, and (2) to have him viable if he does win the nomination. His pyramid comment was uninformed, but, fortunately the president is not in charge of storing seven years worth of grain for the country, so I don’t care if he is a little off target on that issue.

5 posted on 11/07/2015 1:41:44 PM PST by Pollster1 ("Shall not be infringed" is unambiguous.)
[ Post Reply | Private Reply | To 1 | View Replies]
To: 2ndDivisionVet
So how about mocking Muslims who believe that Muhammad flew into Jerusalem on the back of a flying horse with a woman's face?

That would go over well.

Ron and Rand are aliens. In fact Ron is almost a dead wringer for the Hale Bopp guy.

Can you imagine if it were Cruz who made the statement about
the Pyramids were built to store grains.

It would not be a pretty picture.

Well if he got the idea from a hollywood movie, well then, maybe he isn’t playing with a full deck, and maybe you aren’t either for even suggesting it.

The lollipop suckers are going to repeat that endlessly like they did with the insignificant spelling “error” of Dan Quayle.

However, if you do your research, you will find that Joseph built underground silos to store gain. THere are hieroglyphics showing people walking up and down stairs carrying bags of wheat on their shoulders.

Well that was well before Hollyweird was taken over by the commies. And Heston was a Patriot who loved God and the Second Amendment.

I visit other forums and I can say there are lots of jokes out there about Carson and the pyramids for grain storage. Someone went to the trouble of making up a clever picture. Rofl! I forgot about that cult! They drank koolaid too, didn’t they, like Jim Jones? That should be in their ad.

Koolaid. The drink of choice for suicidal cults for a REASON: if it’s gonna be your last drink, you want it to taste great!

You beat me to it. I was just going to point out that Rand’s daddy was an alien. 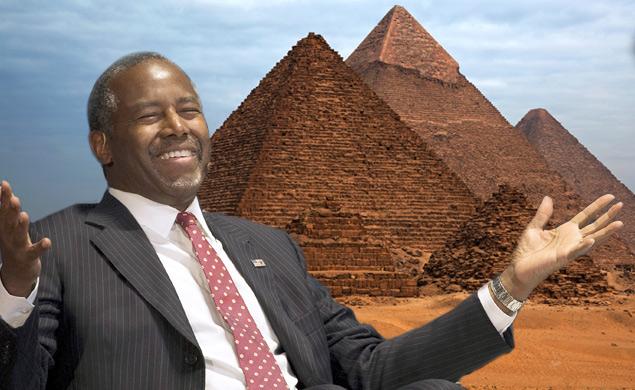 There are many causes for vitamin B12 deficiency.

Surprisingly, two of them are practices often undertaken to improve health:

A primary sign of low B12 levels is a constant lack of energy.

Oct 26, 2015 - On Friday in Miami, Trump had ripped Carson for having even less energy than Jeb Bush, whom Trump has called low-energy. Everyone knows they were made to sharpen razors. Everyone else knows that the great pyramid is the gospel in stone. You can read about it in the big Davis book.

My guess is this came from one of the teachings of Ellen G. White, the false prophetess who was a founder of the SDA church. She has a pyramid symbol on her grave stone.