Some Fish Can Regenerate Their Eyes. Turns Out, Mammals Have Those Genes Too
www.sciencealert.com ^ | 8 OCTOBER 2020 | TESSA KOUMOUNDOUROS

Damage to the retina is the leading cause of blindness in humans, affecting millions of people around the world. Unfortunately, the retina is one of the few tissues we humans can't grow back.

Unlike us, other animals such as zebrafish are able to regenerate this tissue that's so crucial to our power of sight. We share 70 percent of our genes with these tiny little zebrafish, and scientists have just discovered some of the shared genes include the ones that grant zebrafish the ability to grow back their retinas.

"Regeneration seems to be the default status, and the loss of that ability happened at multiple points on the evolutionary tree," said Johns Hopkins University neuroscientist Seth Blackshaw.

The retina is the part of our eyes that reacts to light. It contains light-detecting rod and cone cells as well as the neurons and synapses that convey the received light information to our brains.

During development, the retina forms from the growing brain, so it is actually brain tissue that ends up in the back of our eyes, constituting a part of our central neural system.

Müller glia cells are also part of the retina - they support retinal neurons by essentially doing the housekeeping. They clean up neurotransmitters and other debris, store important molecules, provide physical support and call on outside help from the immune system when required.

In some fish and reptiles these glia also regenerate neurons by morphing into cells that can then divide into retinal neurons, including photoreceptors such as rods and cones. But not in mammals.

By looking at the genes expressed in Müller glia across zebrafish, chicks, and mice, neuroscientist Thanh Hoang from Johns Hopkins and colleagues have now observed how these cells responded after injury in these three species.

The genes activated were involved in containing the injury, calling in immune cells to clean up damaged tissue and fight off potential invaders, explained Blackshaw. But then, a network that suppresses these genes kicked in only in their mouse subjects, keeping them from transforming into cells that produce other kinds of retinal cells.

The researchers also noticed that after a retinal injury glial cells in all three species stopped making nuclear factor I (NFI), a protein that stops the cell from accessing bits of DNA, essentially turning genes off.

"Our research overall indicates that the potential for regeneration is there in mammals, including humans, but some evolutionary pressure has turned it off," explained Blackshaw.

The team suspects the loss of this ability may be linked to a trade-off between regenerating central nervous system cells and parasite resistance. Glia help restrict the spread of infections, and if they're turned into neuron-producing cells, they can't do this.

A previous study has shown that signals which cause inflammation to ward off infections also stop glia cells from changing into neuron producers, supporting this idea.

"We know that certain viruses, bacteria, and even parasites can infect the brain. It could be disastrous if infected brain cells were allowed to grow and spread the infection through the nervous system," says Blackshaw.

Of course, we're still a very long way off from growing a replacement retina in actual people. The team cautions that this is a highly complicated system with many independent mechanisms involved that need to be further explored. But understanding these pathways may one day allow scientists to help us better repair damaged sight.

This research was published in Science.

This is cool 21st Century research.

Wasn’t it said once that the wages of sin is non-regeneration?

Mutations DO NOT create new abilities, they only destroy capabilities.
Most of your (and even single cell organisms) DNA is switched off.
It can be switched ON by environmental factors - this is called EPIGENOMIC affect.
Google it EPIGENOMICS

You have been lied to - constantly told that mutations allow adaptation. It’s not true.. Epigenomics is PROVEN true.

Essentially, the “junk” DNA never was “junk” it’s additional capabilities that get switched ON when needed. A methyization process binds with the DNA to enable genes.

This is real science, proven, reproducible in a lab. Not theory like the idea you can create functions from random mutations.

Having the “genes” is only a small part of the picture. Decades ago, there was a research paper describing how the optic nerve developed. If found that the nerve growth was controlled and sometimes stopped by a chemical the body produced to keep the nerve from growing in unwanted areas. That chemical would be the result of many more genes, which are poorly understood.

I could use some of that.

Also says the retina is an extension of the cns.

So... would be cool to discover that the brain proper, and the chord can also do this?!

Opens up a whole new world of injury mending.

15 posted on 10/08/2020 8:54:22 PM PDT by going hot (Happiness is a momma deuce)
[ Post Reply | Private Reply | To 1 | View Replies]
To: SunkenCiv; Red Badger; Gamecock; SaveFerris; PROCON; Rebelbase
The team suspects the loss of this ability may be linked to a trade-off between regenerating central nervous system 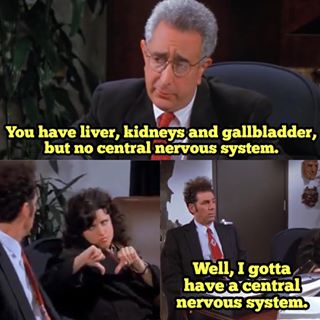 My 90 year old father was loosing vision from macular degeneration. My brother and I bought him a blender and I taught him how to make several raw food drinks in addition to vitamins he was already taking. I suggested 3 cups a day. One recipe was mostly a raw vegetable drink sweetened with a raw apple. The other was sweeter with various raw fruits. Unfortunately, he lost his temper standing in a grocery line on a Friday night buying food to take with him on a 2 hour trip to try to collect rent money from dead beats. He ended up in the hospital with a stroke and died in two weeks. As I went over his bills and records, I could see that in the 4 months his hand writing had improved considerably, so I think his eyes must have gotten a lot better.

Two years ago I was developing cataracts. When I walked out my door in the afternoon facing the sun the entire area in front of me was blinding glaring yellow. In addition to the vitamins I was already taking, I started taking 20 mg of Lutien, and 4 mg. of Astaxanthine twice a day. Now when I walk out that door there is only a 10% area of glare around the sun, and when driving at night, the headlights coming toward me are a lot less bothersome.