Just in. I am looking at a picture of the WTC with smoke pouring out of the western tower. Looks like a huge amount of damage. Debris raining down on people in the street. 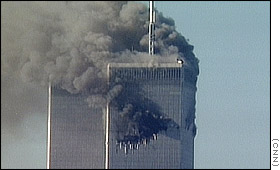 The man on the phone right now says he saw the impact and that there was an ENORMOUS fireball, many times bigger than the top of the WTC (which is pretty darned big). And that the plane simply plowed into the north side (the one in the photo) on a left-banking turn.