On Jan. 24, 2017, PBS aired a two-hour special on Rachel Carson, the mother of the environmental movement. Although the program crossed the line from biography to hagiography, in Carson’s case, the unbridled praise was well deserved – with one exception.

Unfortunately, the PBS documentary neglected to mention that in her groundbreaking book, Silent Spring, Carson had made one critical mistake – and it cost millions of people their lives.

On Nov. 1, 1941, Rachel Carson published her first book, Under the Sea-Wind. Although written for adults, the book had a child-like sense of wonder. Under the Sea-Wind told the story of Silverbar, a sanderling that migrated from the Arctic Circle to Argentina; Scomber, a mackerel that traveled from New England to the Continental Shelf; and Anguilla, an American eel that journeyed to the Sargasso Sea to spawn. “There is poetry here,” wrote one reviewer.

On July 2, 1951, Carson published her second book, The Sea Around Us. Two months later, The Sea Around Us was #1 on the New York Times bestseller list, where it remained for 39 weeks: a record. When the dust settled, The Sea Around Us had sold more than 1.3 million copies, been translated into 32 languages, won the National Book Award, and been made into a movie. Editors of the country’s leading newspapers voted Rachel Carson “Woman of the Year.”

In October 1955, Carson published her third book, The Edge of the Sea, a tour guide for the casual adventurer. The New Yorker serialized it, critics praised it and the public loved it: more than 70,000 copies were sold as it rocketed to #4 on the New York Times bestseller list.

Today, most people under the age of 40 have probably never heard of Rachel Carson. But in the early 1960s, almost every American knew her name.

On Sept. 27, 1962, Rachel Carson changed her tone. Her next book, Silent Spring, which she called her “poison book,” was an angry, no-holds-barred polemic against pesticides: especially DDT.

The first chapter of Silent Spring, titled “A Fable for Tomorrow,” was almost biblical, appealing to our sense that we had sinned against our Creator. “There was once a town in the heart of America where all life seemed to live in harmony with its surroundings. Then a strange blight crept over the area and everything began to change… the cattle and sheep sickened and died… streams were lifeless… everywhere there was the shadow of death.”

Birds, especially, had fallen victim to this strange evil. In a town that had once “throbbed with scores of bird voices there was now no sound, only silence.” A silent spring. Birds weren’t alone in their suffering. According to Carson, children suffered sudden death, aplastic anemia, birth defects, liver disease, chromosomal abnormalities, and leukemia – all caused by DDT. And women suffered infertility and uterine cancer.

In May 1963, Rachel Carson appeared before the Department of Commerce and asked for a “Pesticide Commission” to regulate the untethered use of DDT. Ten years later, Carson’s “Pesticide Commission” became the Environmental Protection Agency, which immediately banned DDT. Following America’s lead, support for international use of DDT quickly dried up.

Although DDT soon became synonymous with poison, the pesticide was an effective weapon in the fight against an infection that has killed – and continues to kill – more people than any other: malaria.

By 1960, due largely to DDT, malaria had been eliminated from 11 countries, including the United States. As malaria rates went down, life expectancies went up; as did crop production, land values, and relative wealth.

Probably no country benefited from DDT more than Nepal, where spraying began in 1960. At the time, more than two million Nepalese, mostly children, suffered from malaria. By 1968, the number was reduced to 2,500; and life expectancy increased from 28 to 42 years.

After DDT was banned, malaria reemerged across the globe:

In India, between 1952 and 1962, DDT caused a decrease in annual malaria cases from 100 million to 60,000. By the late 1970s, no longer able to use DDT, the number of cases increased to 6 million. In Sri Lanka, before the use of DDT, 2.8 million people suffered from malaria. When the spraying stopped, only 17 people suffered from the disease. Then, no longer able to use DDT, Sri Lanka suffered a massive malaria epidemic: 1.5 million people were infected by the parasite. In South Africa, after DDT became unavailable, the number of malaria cases increased from 8,500 to 42,000 and malaria deaths from 22 to 320.

Since the mid-1970s, when DDT was eliminated from global eradication efforts, tens of millions of people have died from malaria unnecessarily: most have been children less than five years old. While it was reasonable to have banned DDT for agricultural use, it was unreasonable to have eliminated it from public health use.

Environmentalists have argued that when it came to DDT, it was pick your poison. If DDT was banned, more people would die from malaria. But if DDT wasn’t banned, people would suffer and die from a variety of other diseases, not the least of which was cancer. However, studies in Europe, Canada, and the United States have since shown that DDT didn’t cause the human diseases Carson had claimed.

Indeed, the only type of cancer that had increased in the United States during the DDT era was lung cancer, which was caused by cigarette smoking. DDT was arguably one of the safer insect repellents ever invented – far safer than many of the pesticides that have taken its place.

Carson’s supporters argued that, had she lived longer, she would never have promoted a ban on DDT for the control of malaria. Indeed, in Silent Spring, Carson wrote, “It is not my contention that chemical pesticides never be used.” But it was her contention that DDT caused leukemia, liver disease, birth defects, premature births, and a whole range of chronic illnesses.

An influential author can’t, on the one hand, claim that DDT causes leukemia (which, in 1962, was a death sentence) and then, on the other hand, expect that anything less than that a total ban of the chemical would result.

In 2006, the World Health Organization reinstated DDT as part of its effort to eradicate malaria. But not before millions of people had died needlessly from the disease. 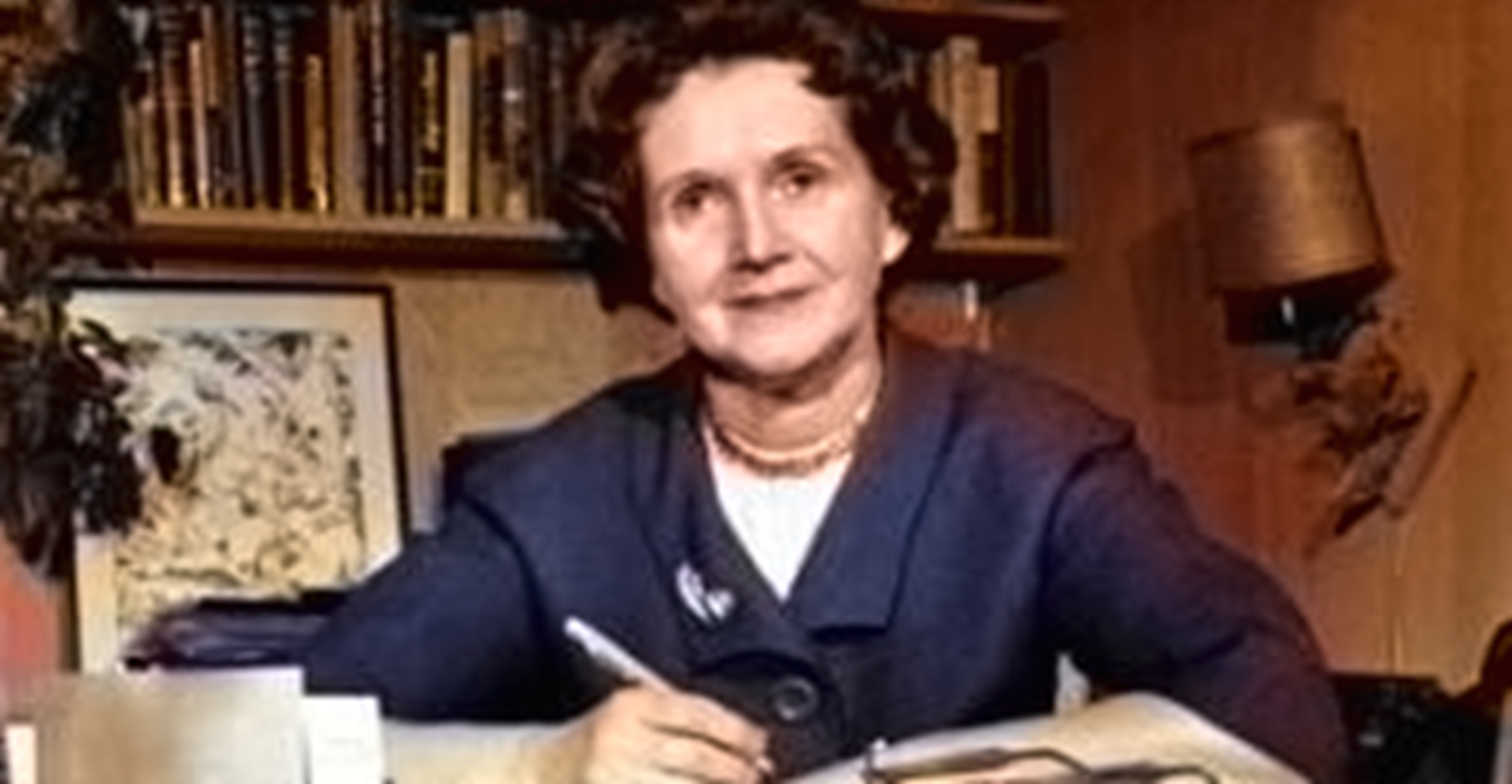 Another beloved of the left who is, albeit indrectly, responsible fo rthe deaths of millions. I say indirectly, becuase the EPA didn't have to unilaterally ban DDT based on her crazy ravings. But they did.

Evil as are all evironazis.

1. Can DDT eradicate ticks?
2. Can I get the ingredients to make DDT in my kitchen sink?

Enviromentalists with their simplistic prognostications have killed hundreds of millions of people.

4 posted on 05/21/2019 5:17:25 PM PDT by cyclotic
[ Post Reply | Private Reply | To 1 | View Replies]
To: Rummyfan
Supposedly DDT is not too difficult to whip up in your garage except the government controls the precursor chemical as a controlled substance.

Nothing is so dangerous as a do-gooder leftist out to “help” make something “better”. d;^)

And the fools in the Pittsburgh city council named a bridge after her.

8 posted on 05/21/2019 5:21:15 PM PDT by kosciusko51
[ Post Reply | Private Reply | To 1 | View Replies]
To: Rummyfan
Benjamin Kean started the Tropical Medicine course every year at Cornell University Medical College by walking out onto the stage in the dark, with his hands behind his back.

The spotlight hit him as he ascended the podium.

"Two books in this century have killed 100 million people. The first, you know (brings out Mein Kampf in his left hand), the second may surprise you" (brings out Silent Spring in his right hand).

An amazing teacher, and an amazing man. I was very lucky to know him.

I well remember her stupid little book and her too. Being as my family have been engaged in agriculture for generations in South Texas we couldn’t believe our government was so stupid as to ban DDT based on that book!

10 posted on 05/21/2019 5:25:39 PM PDT by Fiddlstix (Warning! This Is A Subliminal Tagline! Read it at your own risk!(Presented by TagLines R US))
[ Post Reply | Private Reply | To 1 | View Replies]
To: cyclotic
DDT kills ticks. But it is especially good at killing bedbugs and their eggs. The resurgence of bedbugs has been directly linked to the unavailability of DDT.

There are a few DIY DDT videos on Youtube, and various recipes floating around the "interwebs".

Fifty years ago, on those hot, sweltering mosquito infested nights in SE Asia, not having bug repellent, I used to spray myself down with DDT laden bug killer. Soaked myself in it. It worked. And I’m still here.

I call her the greatest mass murderer of all time!
Still murdering people today!

Thanks to the the useless chowderhead Ruckleshaus who Nixon appointed head of EPA. And then Dickson didn’t stop the ban. I think his wife was instrumental too. My question why hasn’t this error been corrected in the intervening years? Answer? Because congress is useless as a dick on a cow. Raising tobacco age to 21 is more important than saving millions of lives,

I used to tell my students that Rachel Carson was responsible for more deaths than Hitler and Stalin combined, albeit inadvertently. The banning of DDT caused the deaths of over a hundred million people due to malaria’s comeback. Of course the deaths were of black and brown people in countries that no one cared about, but at least the pelicans and falcons didn’t have thin egg shells.

There was a professor who offered to eat a pound of DDT to show that it was harmless to humans. The kids would ask “what happened?” And I would answer “He died...over twenty years later while climbing a mountain in his 80s”.

I think the textbooks should teach the lesson of Rachel Carson as a lesson of unintended consequences and how the road to hell is paved with good intentions.

When I was a kid in New Orleans in the late 60’s the only thing that drew as much attention as the Ice cream truck in the neighborhood was the mosquito fogger truck spewing a cloud of DDT behind it.

We used to chase that thing on our bicycles riding in and out of the cloud like children following the Pied Piper.

There were no mosquitos I ever felt while in the North.Lucky for us.

I never did take those little experimental Malaria pills they

I live a stone’s throw from Rachel’s home. I past it a few times a week. I would drop F bombs as I past her street. I quit doing that recently because it grow old. My feelings are the same. She is responsible for as many deaths as Hitler and Stalin and we name a bridge after her. My best guess is she is at least partially responsible for at least 50 million deaths from malaria.

You can drink it and it won’t hurt you.