The First Genetically Modified Mosquitoes Have Just Been Released in The US
https://www.sciencealert.com ^ | NICOLETTA LANESE | 6 MAY 2021

Oxitec previously released its modified Aedes aegypti mosquitoes in Brazil, the Cayman Islands, Panama, and Malaysia, and the company reported that local A. aegypti populations fell by at least 90 percent in those locations, Live Science previously reported.

A. aegypti can carry diseases such as Zika, dengue, chikungunya and yellow fever, and releasing modified mosquitoes offers a way to control the population without using pesticides.

Oxitec's modified mosquitoes, all male, have been engineered to carry a lethal gene; when the modified pests mate with wild female mosquitoes, the lethal gene gets passed on to their offspring.

Though the gene does not affect the males' survival, it prevents female offspring from building an essential protein and thus causes them to die before reaching maturity.

A. aegypti mosquitoes make up about 4 percent of the mosquitoes in the Florida Keys but cause the vast majority of mosquito-borne disease transmitted to humans in the area, Nature reported.

The Florida Keys Mosquito Control District (FKMCD) board typically budgets $1 million a year to control the pest, resorting to costly measures such as spraying aerial insecticides, according to Gizmodo.

Releasing hundreds of millions of genetically modified mosquitoes may be a less expensive and more effective option, the board concluded, especially as mosquito populations become resistant to pesticides over time.

FKMCD first approached Oxitec in 2010, and after a decade of regulatory assessments and local pushback, both the board and the US Environmental Protection Agency (EPA) finally approved the plan to release the genetically modified mosquitoes in the Keys, according to Nature.

In late April, the company placed boxes of mosquito eggs at six locations in Cudjoe Key, Ramrod Key and Vaca Key, according to Nature. Over the next 12 weeks, about 12,000 newly hatched male mosquitoes should emerge from the boxes.

This release will serve as an initial trial so that Oxitec can collect data before running a second trial with nearly 20 million mosquitoes later this year, Nature reported.

The company will capture mosquitoes throughout the trial to observe how far the insects travel from their boxes, how long they live and whether female mosquitoes are actually picking up the lethal gene and dying off. To make it easier to track the modified mosquitoes, Oxitec introduced a gene that causes the mosquitoes to glow under a specific color of light.

The trial faces strong opposition from a small subset of Florida Keys residents, as well as the Center for Food Safety and the Florida Keys Environmental Coalition, Live Science previously reported.

Concerned that the egg boxes might be vandalized, Oxitec placed them on private property and did not disclose their exact locations to the public, Nature reported.

"When something new and revolutionary comes along, the immediate reaction of a lot of people is to say 'wait,'" Anthony James, a molecular biologist who focuses on bioengineered mosquitoes at the University of California, Irvine who is not involved in the Oxitec project, told Nature.

"So the fact that [Oxitec] was able to get the trial on the ground in the United States is a big deal."

Questions remain about whether the genetically modified mosquitoes will have unintended effects on local mosquitoes, animals or the ecosystem at large, Live Science previously reported.

For instance, after Oxitec released genetically modified mosquitoes in Jacobina, Brazil, genes from the insects cropped up in local mosquito populations, hinting that the lethal gene failed to kill off some female offspring before they could mate.

Their hybrid offspring did not carry the lethal gene, but instead carried genes from the original Cuban and Mexican mosquito populations first used to create the genetically modified mosquitoes, according to a 2019 study published in the journal Scientific Reports.

It's unclear whether or how these new genes might have altered the mosquitoes' biology.

Molecular biologist Natalie Kofler, founder of Editing Nature, an organization that advocates for the responsible use of gene editing, told Nature that she hopes the Oxitec trial will be conducted "in a way that's transparent, and in a way that can make some community members feel better about the whole situation," and that the data will offer insight into how the pests might affect local species and ecosystems. 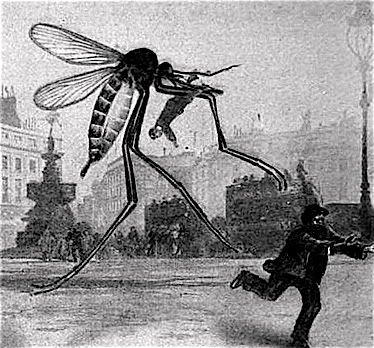 What could go wrong???

This is rather disconcerting.

You notice how whenever we introduce a critter into the wild, we end up wishing we had not most of the time.

Screw worm flies only breed once. They were eradicated by releasing lab-produced sterile male flies.

oops, sorry, I didn’t see that you already posted this :)

Gypsy Moths, then parasitic wasps to get the Gypsy Moths...

Years ago one of my uncles worked on a project that sterilized mosquitoes and released them into the wild producing no offspring. I suppose the mama mosquitoes were quite frustrated. :D

It would have to be a lot of wrong to be worse than all of the diseases which mosquitoes transmit to people.

THEM! (ok, so those were ants, but still)

It assumes male and female mating.

What about the lesbian, gay, bisexual, and transgender mosquitos? Why are their rights ignored?

I have a bad feeling about this project.

We may have the technology but we are not God.

And what about the Qs? Those mosquitoes who are still questioning their sexuality?

They’d better decide quickly because I don’t think they live that long.