Startling evidence has been found which shows mammoth and other great beasts from the last ice age were blasted with material that came from space.

Eight tusks dating to some 35,000 years ago all show signs of having being peppered with meteorite fragments.

The ancient remains come from Alaska, but researchers also have a Siberian bison skull with the same pockmarks.

The scientists released details of the discovery at a meeting of the American Geophysical Union in San Francisco, US.

They painted a picture of a calamitous event over North America that may have severely knocked back the populations of some species.

"We think that there was probably an impact which exploded in the air that sent these particles flying into the animals," said Richard Firestone from the Lawrence Berkeley National Laboratory.

"In the case of the bison, we know that it survived the impact because there's new bone growth around these marks."

And geoscience consultant Allen West added: "If the particles had gone through the skin, they may not have made it through to vital organs; but this material could certainly have blinded the animals and severely injured them."

The mammoth and bison remains all display small (about 2-3mm in size) perforations.

Raised, burnt surface rings trace the point of entry of high-velocity projectiles; and the punctures are on only one side, consistent with a blast coming from a single direction.

Viewed under an electron microscope, the embedded fragments appear to have exploded inside the tusk and bone, say the researchers. Shards have cut little channels.

The sunken pieces are also magnetic, and tests show them to have a high iron-nickel content, but to be depleted in titanium.

The ratios of different types of atoms in the fragments meant it was most unlikely they had originated on Earth, the team told the AGU meeting.

The discovery follows on from the group's previous research which claimed a more recent space collision - some 13,000 years ago.

The researchers reported the discovery of sediment at more than 20 sites across North America that contained exotic materials: tiny spheres of glass and carbon, ultra-small specks of diamond and amounts of the rare element iridium that were too high to be terrestrial.

The scientists also found a black layer which, they argued, was the charcoal deposited by wildfires that swept the continent after the space object smashed into the Earth's atmosphere.

"We had found evidence of particle impacts in chert, or flint, at a Clovis Indian site in Michigan," Dr Firestone said.

"So, we got the idea that if these impacts were in the chert, then they might likely also have occurred in large surfaces such as tusks; and we decided it was worth a shot to go look for them."

Allen West began the hunt at a mammoth tusk sale in his home state of Arizona.

He immediately found one tusk with the tell-tale pockmarks and asked the trading company if he could look through its entire collection. He sorted literally thousands of items.

"There are many things that can cause spots, such as algae, and there were a few of those; but I was only interested in the ones that were magnetic," he recalled. "It was just a tiny magnet on a string, but very strong. It would swing over and stick firmly to these little dots."

The search turned up a further seven ivory specimens of interest, together with the bison skull.

But having gone out and tested the hypothesis of tusk impacts, and having apparently uncovered such items - the team was then astonished to find the animal remains were about 20,000 years older than had been anticipated.

The researchers are now considering a number of possibilities - one that could even tie the older remains to the younger event. 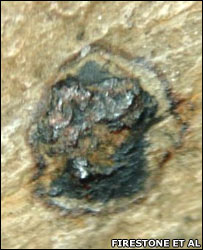 The embedded particles have a high iron-nickel content "People who collect these items today in Siberia and Alaska frequently find the tusks sticking out of the permafrost or eroding out of a riverbank," explained Mr West.

"Maybe, these were tusks from dead animals that were just exposed on the surface, so when this thing blew up in the atmosphere, it would have peppered them. The date could really be anywhere from 13,000 to 35-40,000 years ago."

The team believes there must still be peppered tusks out there that can be dated to 13,000 years ago, and the hope is that the AGU presentation will prompt museums and collectors to look through their archives.

"There should also be a layer of this same meteoritic material in the sedimentary record. It's probably very thin. If we can locate the right place and it hasn't been turbated, we should be able to find this layer; and it shouldn't be too different from the impact layer we found for the 13,000-year event," said Dr Firestone.

Neither proposed impact can yet be tied definitively to any craters - if there ever were any. The team also needs to explain how the bison and mammoth remains can show similar damage when they were widely separated geographically.

The intriguing question is how space impacts might fit into the extinction story of the ice age beasts. The mammoth, their elephant cousins the mastodon, sabre-toothed tigers, some bears, and many other creatures all disappeared rapidly from the palaeo-record about 10,000 years ago.

Their loss has traditionally been put down to either climate change and/or the efficient hunting technologies adopted by migrating humans.

Could impacts have also weakened these populations?

It might be just one more element to factor into what is a really complex picture, commented Dr Ian Barnes from Royal Holloway University of London, UK.

The British researcher studies the DNA of ancient animals to try to glean details of how their populations changed over time.

He said there were some interesting markers in the genetics of different creatures some 30,000 to 45,000 years ago - but it was extremely hard to draw firm conclusions.

"For us the difficulty is that we see patterns but we don't understand what the underlying process is; so it becomes difficult to ascribe causation," he explained.

"Just as in a modern crime scene, it's very difficult to piece all the evidence together and say precisely what was going on; which event led to any particular outcome."

But he added: "Certainly, you can't imagine it helped the animals having a large meteorite hit the Earth's atmosphere and pellet them with shot."

Pleistocene/Holocene extinction ping. This is a really interesting article.

Note the date of 35,000 years before present. This isn’t the same time as the great extinction of the P/H boundary, but it demonstrates that what is possible.

Terrestrial Evidence of a Nuclear Catastrophe in Paleoindian Times
Mammoth Trumpet | March 2001 | Firestone/Topping
Posted on 07/24/2006 3:03:03 AM EDT by ForGod’sSake
http://www.freerepublic.com/focus/news/1671134/posts

"They're not done yet, let them cook a little longer" Placemarker

thanks also to lepton and Fred Nerks:

As a non-professional in this field, I have no vested interest in defending or protecting a pet theory. And they are all theories.
What is possible is likely closer to the truth than present dogma. What we don't know is larger, by several orders of magnitude than what is known. I am convinced of that.

As a human being, instinct in me hopes that the next will not occur before I go to my rewards.
But the curiosity in me hopes, subconsciously, that it would be the experience of a lifetime, and would dwarf all other scares of my life, real and imagined.

"The Cycle of Cosmic Catastrophes: Flood, Fire, and Famine in the History of Civilization"

Why the smart money is on Duncan Hunter
http://www.freerepublic.com/focus/f-news/1926032/posts

He has a unique explaination for frozen mammoths that could mesh with this find.
(full text online)

But wait! The extinction of the mammoths was due to greedy, evil pre-historic humans over-hunting them. Now this?

Where is MY brain today?

When I first read the caption, I thought it said “Great breasts peppered from space”.

Note the date of 35,00 years before present. Also in the article there was something about 20,000 year earlier.

It is entirely possible there was more than one of these events. Remember the Tungusku (sp?) air burst over Siberia in 1908. There was also a significant air burst over the Amazon mid last century. Also I think more attention needs to be paid to major vulcanism. There have been recent posts about the Toba supervolcano (diameter 18 by 65 miles about 74 thousand years ago) which may have decimated the human population. The modern Japanese volcano Sakara-jima is on the edge of a 15 mile diameter which has been dated as around 22,000 years old. Just look at the mess Pinatubo with a 3 mile diameter crater made. I think the last suspected Neanderthal remains were from around that time. Does anyone have dates and sizes of other major volcanos since Toba?

....”But wait! The extinction of the mammoths was due to greedy, evil pre-historic humans over-hunting them. Now this?”....
Not to worry, I’m sure they will find that the pre-historic humans you refer to had outlawed lead shotgun pellets, and they were using the next best thing.....