Matthew Vadum, writing in today's American Spectator, blows the cover off Barack Obama's plans to hijack the observance of the 9/11 terrorist attacks by turning it over to the radical leftist Lennox Yearwood of the politically well-connected Hip Hop Caucus.

This news has been hiding in plain sight, but got lost in the battle this month over nationalized health care, so Vadum has done a great service by bringing this to our attention.

Vadum's piece has been picked up by Michelle Malkin and Gateway Pundit.

This article is intended to fill in some big pieces of the picture about what this means. Such as Yearwood calling the war on al Qaeda and the Taliban in Afghanistan in response to 9/11, "immoral" (Huffington Post, March 20, 2009) and the Air Force accusing the reservist (a 2nd Lt.) of being a threat to national security.

Yearwood is a Marxist who works closely with other leftist terrorist supporting groups including the ANSWER Coalition, and Code Pink.

Yearwood and his anti-American allies have been working to bring about America's defeat in the war on terror. They have used the war to propagandize their broader leftist agenda. To that end, they have cynically allied themselves with Muslim terrorists and state sponsors of terrorism against America.

Obama's White House is no stranger to this crowd. One of Obama's top fundraisers and donors was Code Pink co-founder and Osama bin Laden sympathizer Jodie Evans. (The mainstream media steadfastly refused to investigate Obama's ties to Evans during last year's campaign.)

Vadum ends his article with this rhetorical observation: "At no time does anyone explain why this National Day of Service has to be held -- of all the 365 days in a year -- on Sept. 11."

The answer is found in the anti-American, terrorist sympathizing ideology of Barack Obama and his leftist base. Turning the observation of 9/11 over to the anti-American left is akin to turning over the observance of Martin Luther King, Jr. Day to the Ku Klux Klan.

Yearwood has formed a group called Greening the Block whose policies echo the 'no blood for oil' mantra used by the anti-American left to undermine America's effort to win the war on terror. Here's a video from October 27, 2007 of Yearwood speaking at a 'No War, No Warming' rally led by Code Pink at the U.S. Capitol. Yearwood accuses the U.S. of waging war "to steal the oil from the Middle East" (isn't that what bin Laden says?)

The annointing of Lennox Yearwood is a signal to our enemies that Obama sides with them and not America on September 11. Cloaking this in green propaganda and community service is a cynical ploy to undermine America on the home front. We're a long way from the country we were on September 12, 2001. God help our troops on the battlefield.

Yearwood's bio from his blog at the ACLU:

Rev. Lennox Yearwood, Jr. is the President of the Hip Hop Caucus. In 2004 he was the co-creator of the Vote Or Die! campaign with P. Diddy, and served as Russell Simmons’ Political and Grassroots Director. He was also the Executive Director of Hip Hop Voices a program of Voices for Working Families at AFL-CIO. Rev. Yearwood is a nationally recognized activist and community organizer, known in particular for organizing for justice in response to Hurricane Katrina and for his fierce opposition to the war in Iraq.

Yearwood is represented by the liberal Democrat front group Citizens for Responsibility and Ethics in Government. (a href="http://www.discoverthenetworks.org/groupProfile.asp?grpid=7309">CREW.

Yearwood also serves on the board of Progressive Democrats of America:Progressive Democrats of America is a grassroots PAC that works both inside the Democratic Party and outside in movements for peace and justice. Our goal: Elect a permanent, progressive majority in 2008. PDA's advisory board includes seven members of Congress and activist leaders such as Tom Hayden, Medea Benjamin, Thom Hartmann, Jim Hightower, and Rev. Lennox Yearwood. For more information, see: http://pdamerica.org. Jodie Evans is also a leader of PDA.

Yearwood is a member of Iraq Veterans Against the War (he did not serve in Iraq). He was a 2nd Lt. in the Air Force Reserve.

In the face of political pressure, the Air Force backed down on kicking him out of the reserve for conduct "clearly inconsistent with the interest of national security."

I saw this and thought my head was going to explode.

We gotta get the BC and authenticate this monstrosity!

Man, they just let anyone into the Air Force. Sign up and you’re in. Want to be an officer? Sure! Sign here!

Just another day in the anti-establishment Obama Administration!

5 posted on 08/24/2009 11:10:39 AM PDT by Erik Latranyi (Too many conservatives urge retreat when the war of politics doesn't go their way.)
[ Post Reply | Private Reply | To 2 | View Replies]
To: kristinn
Of course the Flight 93 memorial in PA is a giant crescent facing Mecca. A solemn memorial for the Muslims who sacrificed so much on 9/11.

All of this is happening before our eyes. As a script for a Hollywood movie it would never get picked up -- too ludicrous. No one would believe that any of this could happen in real life.

Just wait till this SOB prez comes back from his vacation in Martha’s Vineyard, the press will light into him so fast. (sheez...you know it’s sarcasm...)

Its as though Obama has brought all the lunatics of the fringe left into the White House and all its events, extensions, and activities.

The Founding Fathers should have made provision in the Constitution for recall of idiot Presidents. But then they never envisioned a nation with an army of illegal residents, and a substantial proportion of the population on the public dole, not landholders and yet able to vote. Nor did they anticipate the possibility of a non-natural born citizen running for office and getting elected, or of a society which condones stealing from those who WORKED to get what they HAVE in order to GIVE to those who HAVE NOT, what they don't deserve.

This is satire, right?

Well...according to Obammy and friends...9/11 was really our fault. We shouldn’t have treated Muslim people the way we treated them. If wasn’t for the United States there wouldn’t have been a 9/11 right?

In case you haven’t seen this ping

“September 11 is about bringing people together to recognize that change happens not in the corridors of Washington, DC, but it happens in the streets of Detroit, Cleveland, San Francisco, Oakland, Richmond, and cities across the country,” said Phaedra Ellis-Lamkins, CEO of the Oakland-based group Green for All

“Even as I hope for some measure of peace and comfort to the bereaved families, I must also hope that we as a nation draw some measure of wisdom from this tragedy. Certain immediate lessons are clear, and we must act upon those lessons decisively. We need to step up security at our airports. We must reexamine the effectiveness of our intelligence networks. And we must be resolute in identifying the perpetrators of these heinous acts and dismantling their organizations of destruction.

“We must also engage, however, in the more difficult task of understanding the sources of such madness. The essence of this tragedy, it seems to me, derives from a fundamental absence of empathy on the part of the attackers: an inability to imagine, or connect with, the humanity and suffering of others. Such a failure of empathy, such numbness to the pain of a child or the desperation of a parent, is not innate; nor, history tells us, is it unique to a particular culture, religion, or ethnicity. It may find expression in a particular brand of violence, and may be channeled by particular demagogues or fanatics. Most often, though, it grows out of a climate of poverty and ignorance, helplessness and despair.

“We will have to make sure, despite our rage, that any U.S. military action takes into account the lives of innocent civilians abroad. We will have to be unwavering in opposing bigotry or discrimination directed against neighbors and friends of Middle Eastern descent. Finally, we will have to devote far more attention to the monumental task of raising the hopes and prospects of embittered children across the globe-children not just in the Middle East, but also in Africa, Asia, Latin America, Eastern Europe and within our own shores.” http://blogs.telegraph.co.uk/news/tobyharnden/5213537/Barack_Obama_and_John_McCain_on_911_Statements_then_and_now/

Turn off the spigot. They cant function without funds.

Support the Fair Tax. Get rid of the IRS.

18 posted on 08/24/2009 11:18:24 AM PDT by Concho
[ Post Reply | Private Reply | To 13 | View Replies]
To: kristinn
I was honored to meet a few of the FDNY Brothers who were at the scene on 9/11. One told the story of the gut-wretching noise of what a body of some poor soul sounds like hitting the ground after jumping from those towers. A sound that will haunt him the rest of his life. Put FDNY in charge, they'll know what to do. 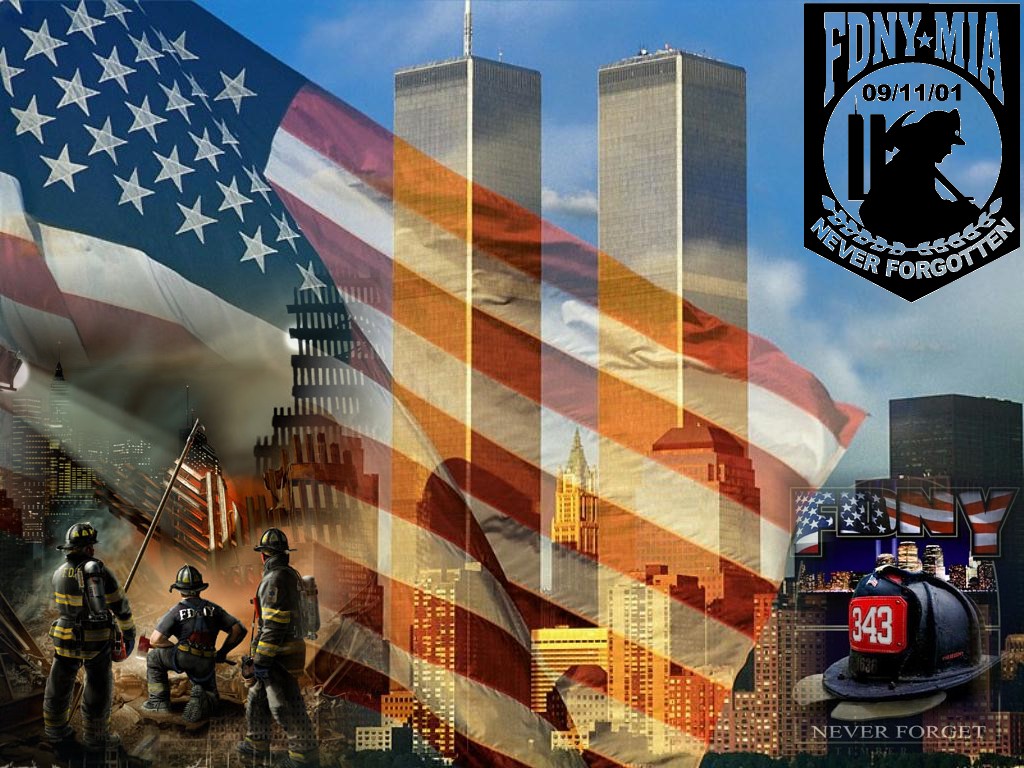 I get the distinct feeling from this that black Americans consider Sept. 11th 2001 to be payback for slavery.