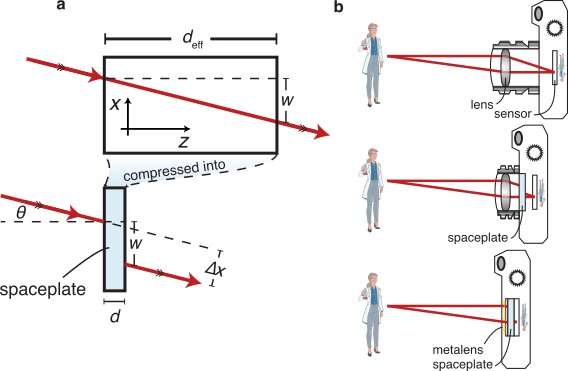 Operating principle of a spaceplate. a, A spaceplate can compress a propagation length of deff into a thickness d. For example, a beam incident on the spaceplate at angle θ will emerge at that same angle and be transversely translated by length w (resulting in a lateral beam shift ?x), just as it would for deff of free space. b, Adding a spaceplate to an imaging system such as a standard camera (top) will shorten the camera (center). An ultrathin monolithic imaging system can be formed by integrating a metalens and a spaceplate directly on a sensor (bottom).

Can you imagine one day using a telescope as thin as a sheet of paper, or a much smaller and lighter high-performance camera? Or no longer having that camera bump behind your smartphone?

In a paper published in Nature Communications, researchers from the University of Ottawa have proposed a new optical element that could turn these ideas into reality by dramatically miniaturizing optical devices, potentially impacting many of the applications in our lives.

To learn more about this project, we talked to lead author Dr. Orad Reshef, a senior postdoctoral fellow in the Robert Boyd Group, and research lead Dr. Jeff Lundeen, who is the Canada Research Chair in Quantum Photonics, Associate Professor in the Department of Physics at the University of Ottawa, and head of the Lundeen Lab.

Can you describe the new optical element your team developed, the spaceplate?

Orad Reshef: Light naturally "spreads out" when it is traveling, and every optical device we know of relies on this spread; we wouldn't know how to design cameras without it. For example, in every telescope, there is a large gap between the eyepiece and the objective lens to give light room to spread.

A spaceplate simulates the same spreading that light would experience traveling a large distance in a small device. To light, a spaceplate looks like more space than it occupies. In a way, the spaceplate is a counterpart to the lens, doing things the lens can't do to shrink down entire imaging systems.

We introduced the idea of a spaceplate in our paper, experimentally demonstrating it and showing it is compatible with broadband light in the visible spectrum that we use to see.

Jeff Lundeen: We considered what would happen if you manipulated light based on the angle rather than the position of a light ray. Lenses act via the position of the ray. Angle is a completely novel domain, and no one had shown that it could be used to make something particularly useful. We identified a useful application, compressing space. And then we showed that we could actually design and experimentally demonstrate plates that do exactly that.

Orad Reshef: This is exciting because this device will let us shrink down all sorts of very large devices that we thought were impossible to miniaturize in optics. In order to design it, we need to come up with a new set of rules that is incompatible with that used in lens design. Nobody knows what they are, it's like the wild west.

How did you come up with this idea?

Jeff Lundeen: Orad Reshef is an expert in using nanotechnology for manipulating a ray based on its position (e.g. meta-lenses or, more generally, meta-surfaces). We were casually discussing the limitations of manipulating light with these meta-surfaces and I said it would be cool to instead manipulate light based on its angle.

Dr. Reshef was immediately confident that he could design and fabricate something that could do that and I subsequently concluded the easiest goal would be to replace the space needed for spread (i.e., propagation).

Over the course of the next few months, in discussions with Dr. Boyd and Dr. Reshef, we slowly realized how amazing and useful such a device would be. Both Dr. Reshef and I came up with viable and completely different designs, which showed there were many ways to create such a device. We studied three in our paper but there are more coming.

How could this technology be used? What are the applications of the spaceplate in our daily lives?

Orad Reshef: A spaceplate can be used to miniaturize many optical systems, be it a display or a sensor. For example, an advanced spaceplate can enable paper-thin telescopes or cameras; it could be used to remove the camera bump on the back of your smartphone.

Jeff Lundeen: People lug around large cameras with huge telephoto lenses. If we can sufficiently improve the spaceplate's performance, I envision the possibility of building smaller, lighter cameras with much better performance. In particular, the spaceplate combined with metalenses would allow us to make the entire back surface of, say, an iPhone Max, into a flat and thin camera. It would have as much as 14 times better resolution and low-light performance than those large and heavy cameras.

Thin and small cameras would be useful in a wide variety of applications, including in health care where camera pills or endoscopes could look inside arteries or the digestive system.

What are the next steps?

The article An optic to replace space and its application towards ultra-thin imaging systems is published in Nature Communications.

The camera bump on a cell phone is a first world problem.

I want my flying car first. What’s taking so long?

Heck, I don't even know what a camera bump is.

And not all lenses are the same.

You can have a “versitile” lens but a dedicated high performance lens (for low light, for distance, etc.) can be more suitable. Depends on the task.

I heard a millennial talk radio host joking about the “old tech” of the camera used by the astronauts on the moon. “So big like something from the 40s”. They weren’t going to have much opportunity to go back and get more high definition captures ergo use a camera with a larger negative. Probably also needed to keep moon dust out of the camera.

That’s how I read it.

The article is vague on what a ‘spaceplate’ is. I suspect it is a Metamaterial with a negative index of refraction. Last I heard that had been achieved with microwaves but not yet with optical light.

I can’t quite discern if this is an improved GRIN (GRaded INdex) lens, a nano-Fresnel lens a combination of them or what?

That being said I do have an immediate application for a sheet of paper thick microscope...

Camera bumps and being misgendered. What a terrible country we live in.

I want to see a square mile telescope or, what the heck, a ten square mile one. Weight won't be an issue anymore, just the price of land. 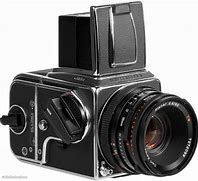 What's cool about the cameras in modern phones is the sensitivity of the CMOS camera element is so great that the f-stop of the lens is high enough that you get a pinhole-camera effect and things can stay in very sharp focus even in fairly low-light.

Something various countries German scientists pioneered back in the 60s except with film emulsions?

I guess I ought to sell my GH 4 and related since I never turn it on anymore. Ditto the GoPro as well. It’s been a couple of years since there’s been any real reason.

Photography and videography used to be enjoyable plus I made a little extra money sometimes.

My two cents: their explanation is atrocious. Before they release this thing they need to hire some marketers who can explain what they did.

I think what they are saying is that a normal lens takes a beam of light, and depending on its location (near the edge, near the middle) bends it to land on the right spot on the sensor. The problem is that you can only bend it so much, so you’re going to need a good distance for the bent beam to travel before it arrives at the right place.

This lens seems to take a particular beam of light regardless where it hits the lens — only just considering the angle it’s coming in at and moves it over to land on a particular spot on the sensor.

Such a telescope located at the Lagrange point between Earth and moon would be very cool :-)

When I got married back in 02, my ceremony was the last film job our photographers did. They moved to digital rather grudgingly. Old school film artists who did beautiful work.

They were eventually crushed in the time of the win like many and to find other lines of work. 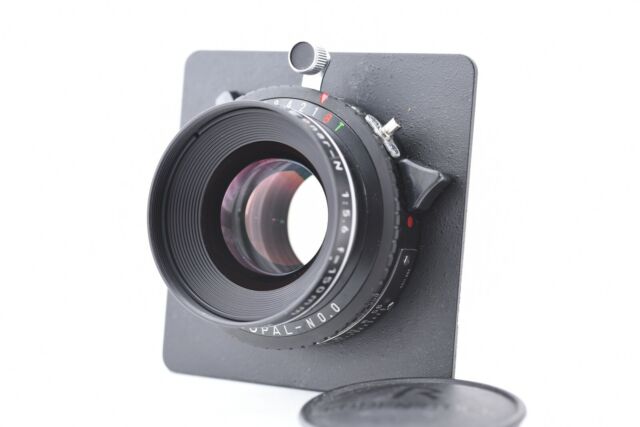 So, the walls can have eyes.

My Samsung doesn’t have a bump. Should it?