When Did We Become Fully Human? What Fossils and DNA Tell Us About the Evolution of Modern Intelligence
Singularity Hub ^ | 10/18/2020 | Nick Longrich

When did something like us first appear on the planet? It turns out there’s remarkably little agreement on this question. Fossils and DNA suggest people looking like us, anatomically modern Homo sapiens, evolved around 300,000 years ago. Surprisingly, archaeology—tools, artifacts, cave art—suggest that complex technology and cultures, “behavioral modernity,” evolved more recently: 50,000 to 65,000 years ago.

Some scientists interpret this as suggesting the earliest Homo sapiens weren’t entirely modern. Yet the different data tracks different things. Skulls and genes tell us about brains, artifacts about culture. Our brains probably became modern before our cultures. 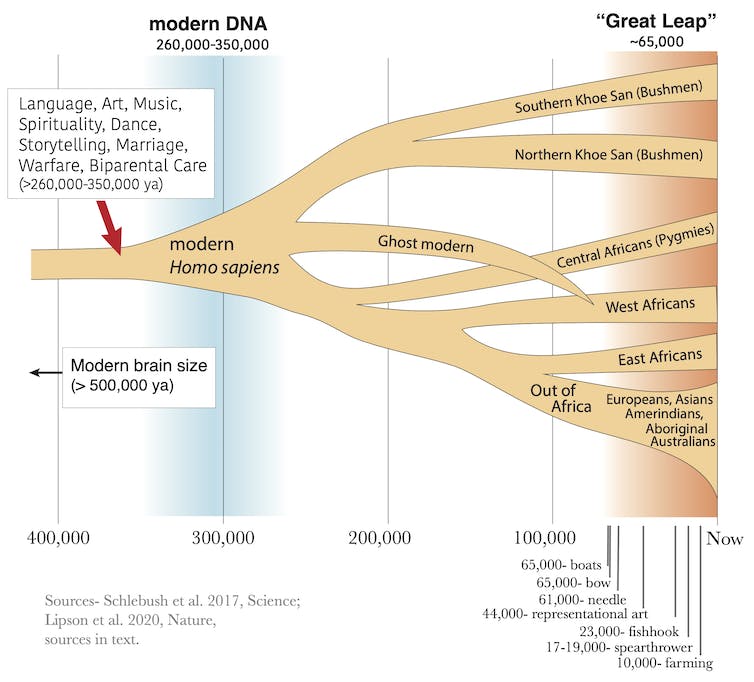 For 200,000 to 300,000 years after Homo sapiens first appeared, tools and artifacts remained surprisingly simple, little better than Neanderthal technology, and simpler than those of modern hunter-gatherers such as certain indigenous Americans. Starting about 65,000 to 50,000 years ago, more advanced technology started appearing: complex projectile weapons such as bows and spear-throwers, fishhooks, ceramics, sewing needles. 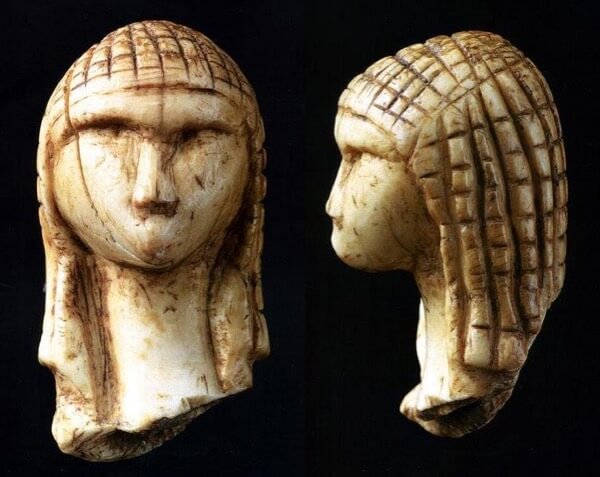 This sudden flourishing of technology is called the “great leap forward,” supposedly reflecting the evolution of a fully modern human brain. But fossils and DNA suggest that human intelligence became modern far earlier.

Assuming the brain was as modern as the box that held it, our African ancestors theoretically could have discovered relativity, built space telescopes, written novels and love songs. Their bones say they were just as human as we are.

Because the fossil record is so patchy, fossils provide only minimum dates. Human DNA suggests even earlier origins for modernity. Comparing genetic differences between DNA in modern people and ancient Africans, it’s estimated that our ancestors lived 260,000 to 350,000 years ago. All living humans descend from those people, suggesting that we inherited the fundamental commonalities of our species, our humanity, from them.

All their descendants—Bantu, Berber, Aztec, Aboriginal, Tamil, San, Han, Maori, Inuit, Irish—share certain peculiar behaviors absent in other great apes. All human cultures form long-term pair bonds between men and women to care for children. We sing and dance. We make art. We preen our hair, adorn our bodies with ornaments, tattoos and makeup.

We craft shelters. We wield fire and complex tools. We form large, multigenerational social groups with dozens to thousands of people. We cooperate to wage war and help each other. We teach, tell stories, trade. We have morals, laws. We contemplate the stars, our place in the cosmos, life’s meaning, what follows death.

The details of our tools, fashions, families, morals and mythologies vary from tribe to tribe and culture to culture, but all living humans show these behaviors. That suggests these behaviors—or at least, the capacity for them—are innate. These shared behaviors unite all people. They’re the human condition, what it means to be human, and they result from shared ancestry.

We inherited our humanity from peoples in southern Africa 300,000 years ago. The alternative—that everyone, everywhere coincidentally became fully human in the same way at the same time, starting 65,000 years ago—isn’t impossible, but a single origin is more likely.

Archaeology and biology may seem to disagree, but they actually tell different parts of the human story. Bones and DNA tell us about brain evolution, our hardware. Tools reflect brainpower, but also culture, our hardware and software.

Just as you can upgrade your old computer’s operating system, culture can evolve even if intelligence doesn’t. Humans in ancient times lacked smartphones and spaceflight, but we know from studying philosophers such as Buddha and Aristotle that they were just as clever. Our brains didn’t change, our culture did.

That creates a puzzle. If Pleistocene hunter-gatherers were as smart as us, why did culture remain so primitive for so long? Why did we need hundreds of millennia to invent bows, sewing needles, boats? And what changed? Probably several things.

First, we journeyed out of Africa, occupying more of the planet. There were then simply more humans to invent, increasing the odds of a prehistoric Steve Jobs or Leonardo da Vinci. We also faced new environments in the Middle East, the Arctic, India, Indonesia, with unique climates, foods and dangers, including other human species. Survival demanded innovation.

Many of these new lands were far more habitable than the Kalahari or the Congo. Climates were milder, but Homo sapiens also left behind African diseases and parasites. That let tribes grow larger, and larger tribes meant more heads to innovate and remember ideas, more manpower, and better ability to specialize. Population drove innovation. 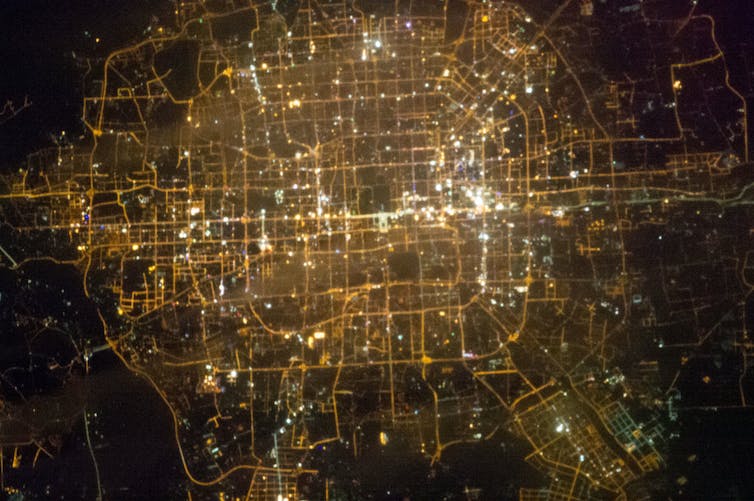 Artifacts reflect culture, and cultural complexity is an emergent property. That is, it’s not just individual-level intelligence that makes cultures sophisticated, but interactions between individuals in groups, and between groups. Like networking millions of processors to make a supercomputer, we increased cultural complexity by increasing the number of people and the links between them.

So our societies and world evolved rapidly in the past 300,000 years, while our brains evolved slowly. We expanded our numbers to almost eight billion, spread across the globe, reshaped the planet. We did it not by adapting our brains but by changing our cultures. And much of the difference between our ancient, simple hunter-gatherer societies and modern societies just reflects the fact that there are lots more of us and more connections between us.

TOPICS: History; Science; Society
KEYWORDS: evolution; fakescience; fossils; godsgravesglyphs; greatleap; helixmakemineadouble; humans; nothistory Navigation: use the links below to view more comments.
first 1-20, 21-40, 41-52 next last
Not an expert by any means, but I always had the sense that our advancements were the result of our very gradual realization, over centuries perhaps, that we could actually improve our living circumstances by our own hand.

It would never occur to a monkey picking fleas off his best friend's head that he could invent fire, weapons, build houses, plant crops, etc. That took time.

The sense that we could actually improve things for ourselves in new and wonderous ways, and not just worry about filling our bellies all the time, by manipulating objects in our environment in such a way as to make life easier and more enjoyable would only dawn on a few scattered individuals over a veeery long time, centuries even, and at first, only by accident; i.e., the first ape to pick up a club and whack a rival over the head with it didn't plan on doing that ahead of time. It occurred accidentally, à la 2001 a Space Odyssey. Now, of course, we're always trying to think of new and better ways to do things 24/7 because we've become accustomed to thinking that way. But nowhere is that mentioned in this article.

Me? Hopefully next week.

“The sense that we could actually improve things for ourselves”

Some say that was the curse in the garden.

Some scientist who really believes in science should come forth and explain that the DNA of a mother and the DNA of her child in the womb don’t match, therefore they are separate individual human beings.

Modern learning advises us that the key is either Ancient Aliens or chronic gum disease. I am considering the choices.

7 posted on 10/29/2020 8:37:54 PM PDT by Fungi
[ Post Reply | Private Reply | To 1 | View Replies]
To: LibWhacker
The ‘smartest’ people on God's green earth are presenting a devolving of the human species ...TOE is a sugar comfort for the ‘smart’ people to preen over their ‘higher’ IQ’s... All flesh returns to the dust from which it came ... NOT one single evolutionist has yet to ‘test’ the soul/spirit intellect... as to its origins...

I longingly await the ‘day’ when the fakes in politics, economics, education and religion get their day of accounting. Some people will have to have a face to face, and even then they cannot admit they are out to lunch.

Isn't it more a case of "When WILL We Become Fully Human?" As far as the idea of "Homo Sapiens" (wise man) goes we have a way yet to travel.

I have yet another dumb question.

How could the “great leap” have occured in all those divergent groups, considering that they had already diverged?

10 posted on 10/29/2020 8:43:57 PM PDT by BenLurkin (The above is not a statement of fact. It is either opinion or satire. Or both.)
[ Post Reply | Private Reply | To 1 | View Replies]
To: LibWhacker
All their descendants—Bantu, Berber, Aztec, Aboriginal, Tamil, San, Han, Maori, Inuit, Irish—share certain peculiar behaviors absent in other great apes.

All except Rosie O'Donnell

I have always wondered how long it would take humans to devolve if our electronic store of knowledge was suddenly wiped out. Would the darkness be deep as many skills combining mind, hand and back are no longer practiced?

If their tools were all made of wood, there is no way to know about them now. So they may be greatly underestimated.

Great article... thank you for posting. I enjoy considering bicameral mind theory along these lines... https://www.julianjaynes.org/about/about-jaynes-theory/overview/

To be perfectly honest, I am not sure we have arrived yet.

I used to believe in evolution but I didn’t have enough faith for those impossible odds.

17 posted on 10/29/2020 9:13:29 PM PDT by Maudeen (Wake up true believers in Christ and VOTE!)
[ Post Reply | Private Reply | To 1 | View Replies]
To: BenLurkin
We inherited our humanity from peoples in southern Africa 300,000 years ago. The alternative—that everyone, everywhere coincidentally became fully human in the same way at the same time, starting 65,000 years ago—isn’t impossible, but a single origin is more likely.

The Great Leap occurred 65,000 years ago, but not all groups participated equally. According to the author, the "humanity" was there in all of them, and they were all capable of making the leap (this I doubt), even if their group didn't do much with that inherent ability. They all may have begun using spears, etc., around the same time, but it's fairly evident some merely copied their neighbors, not invented new tools.

19 posted on 10/29/2020 9:30:23 PM PDT by ProtectOurFreedom ("Inside Every Progressive Is A Totalitarian Screaming To Get Out" -- David Horowitz)
[ Post Reply | Private Reply | To 1 | View Replies]
To: UnbelievingScumOnTheOtherSide

Fossilized wooden tools and implements have indeed been found, which doesn’t mean they haven’t been vastly underestimated in their importance to ancient man, as you pointed out!