In a major breakthrough in what could be the most fascinating story of our time, five U.S. Navy F/A-18 Super Hornet crewmen have recounted a number of incredibly strange encounters with unidentified flying objects off the East Coast of the United States. Two of the pilots went on the record. The surreal craft they encountered had performance that defies known propulsion and aerodynamic capabilities, and are described as looking like something akin to special effects you would have seen in a sci-fi movie circa the late 1980s. The pilots' accounts also point to a major sensor upgrade on their aircraft that made the presence of these craft even detectable at all.

What's even more important is that these events took place as recently as 2015, over a decade after the now famous Nimitz incident with the so-called 'Tic Tac' craft occurred. This is all coming to light—at least officially—just weeks after the U.S. Navy said it is changing its procedures for its service members reporting unexplained phenomenon in their operating environments.

Lt. Ryan Graves, an F/A-18 Super Hornet pilot who has been in the Navy for a decade has come forward after talking to the Navy and Congress about the events he and his squadron mates witnessed between 2014 and 2015.

“These things would be out there all day... Keeping an aircraft in the air requires a significant amount of energy. With the speeds we observed, 12 hours in the air is 11 hours longer than we’d expect.” Source: NYTimes article.

According to Graves, Naval Aviators really began noticing the objects in their training areas after a major technological leap in air combat capability was fielded across much of the U.S. Navy's combat aircraft inventory [the AN/APG-79 Active Electronically Scanned Array radar].

We examined this peculiar move by the Navy [the Navy's strange public announcement that they were changing the reporting procedures for these types of encounters] and the odd timing of it in great detail in my last article on the subject, and this series of events likely had something to do with it. Regardless, with all this in mind, what can we take away from these new on the record revelations?

First off, they are a huge deal. We are talking about two more Navy fighter pilots on the record and another three talking to The New York Times on background. And this was not some account that occurred a decade or more in the past, this was just a couple years ago. Yet what strikes me the most is that once again, this series of encounters occurred in tightly sanitized airspace over the ocean where the military does its most advanced and complex training and testing, just like the Nimitz's Tic Tac incident many years earlier on the west coast. In that case, the gear and personnel involved were also preparing for a major deployment.

Major hat tip to Freeper PIF who found these articles.

Because aliens would never expect humans to improve their radar systems after 40 years...

I sure hope some foreign country hasn’t made leaps and bounds ahead of us in aeronautics.

I better get in my F/A-18 in the backyard and take a poke at what’s going on up there.

I find it interesting that now the Dems are on the ropes:

Man, oh man, are they desperate. 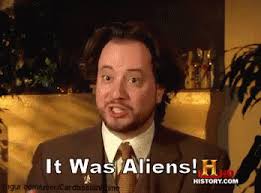 “Someone” would have to have rewritten the laws of physics

An old Chinese curse says: “May you live in interesting times.”?

Even the Japanese can’t do that :)

What The Hell Is Going On With UFOs And The Department Of Defense?

AESA radar is even more susceptible because it is a vast array of tiny TR (Transmitter-Receiver) blocks that are individually steerable, and the individual signals have to be stitched together by a computer to present a composite image to the pilot.

AESA radar is also designed to detect targets with very small radar cross sections, such as cruise missiles, so the sensitivity and signal processing errs on the side of displaying an iffy return rather than suppress it.

I also find it interesting that most of these recent reports of UFOs are from the F/A-18 community, not the F-16 community.

Perhaps flying out at sea, where you don't expect to have any air-to-air returns, you tend to focus attention on these anomalies that might not be noticed by an aircraft operating over land with normal air traffic.

If so, they’ve had the tech for at least 20 years. I saw one of these things in the night sky, far up so it looked like a satellite, but moving at crazy right angles.

These are not just radar encounters. They have been visually confirmed and confirmed by radar on ships supporting the aircraft.

16 posted on 05/29/2019 6:12:33 AM PDT by RoosterRedux
[ Post Reply | Private Reply | To 12 | View Replies]
To: RoosterRedux
"The pilots' accounts also point to a major sensor upgrade on their aircraft that made the presence of these craft even detectable at all. "

This makes me a bit suspicious of the data. Radar is susceptible to a lot of "clutter". It can see water droplets, waves, clouds, dust, and a lot more. Ever since radar was invented, efforts to separate the target from the chaff have been necessary. Just take a look at a single weather radar sweep (not the composite maps you see on TV, or on weather.com). All will show ground clutter as you look around the radar tower. Until more information is known and experience is gained with this "major sensor upgrade" , I wouldn't rule out radar data processing errors.

If you've ever spent some time in a private airplane on a cloudless day, you can sometimes see a shiny spot on the ground right in the center of where the shadow of your airplane should be. Depending on the terrain and the direction of travel this shiny spot can seem to be moving much faster than the airplane is moving. This is just one example of seeing something that really isn't there.

What if you had a drone with nuclear propulsion that was was pilot less, and flown remotely.

This would explain everything.

A few days later, Lieutenant Accoin said a training missile on his jet locked on the object and his infrared camera picked it up as well. “I knew I had it, I knew it was not a false hit,” he said. But still, “I could not pick it up visually.”

At this point the pilots said they speculated that the objects were part of some classified and extremely advanced drone program.

But then pilots began seeing the objects. In late 2014, Lieutenant Graves said he was back at base in Virginia Beach when he encountered a squadron mate just back from a mission “with a look of shock on his face.”

He said he was stunned to hear the pilot’s words. “I almost hit one of those things,” the pilot told Lieutenant Graves.

Most of the Hornets still use APG-65 Radar but a few use the newer APG-73 which is virtually identical to the APG-70 used in Eagles. Since there are no reports coming from the Strike Eagle community, these are anomalies and should be of interest. How the press got ahold of footage from the aircraft is problematic.