Attempts to measure the size, age, and “expansion” of the universe may be a good deal less precise than advertised. But the problem is much worse if the astronomers’ assumptions are incorrect.

An astronomer at Ohio State University, using a new method that is independent of the Hubble relation (which relates redshift to distance), has determined that the Hubble constant (the rate at which the universe is expanding) is 15% lower than the accepted value. His measurements have a margin of error of 6%. 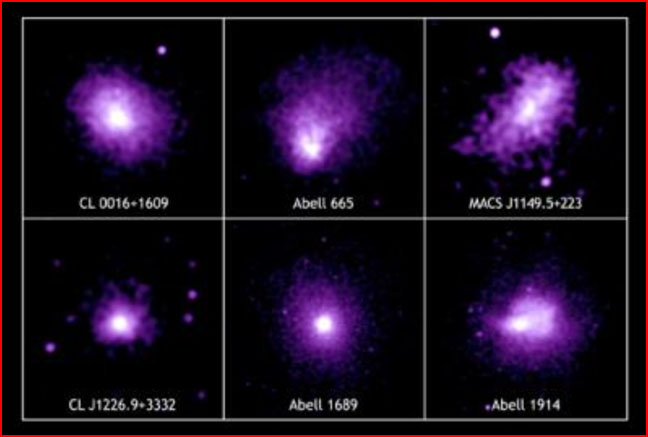 To “determine the Hubble constant” these six galaxy clusters are a subset of the 38 that scientists
observed with Chandra, their distances said to range from 1.4 to 9.3 million light years from Earth.
Credit: NASA/CXC/MSFC/M.Bonamente et al.

Meanwhile, NASA astronomers, using another new method that is independent of the Hubble relation, have determined that the Hubble constant is 7% higher than the accepted value. Their measurements have a margin of error of 15%.

Because traditional astronomers never question traditional assumptions (and appear not to recognize they even have any), they cannot be expected to mention that their margin of erroneous assumption is somewhere around 500%. That, of course, can account for their two “more precise” determinations in exactly opposite directions. They are in the same position as the clockmaker who attempts to determine the exact time of day by measuring the position of the minute hand and fails to notice that the hour hand is missing. Without recognizing that plasma makes up 99% of the universe and that it has dominant electrical properties, astronomers inhabit a make-believe universe in which precise measurements can mean precisely opposite things.

The first astronomer studied a bright eclipsing binary star system in the nearby spiral galaxy M33. He measured with state-of-the-art instruments the stars’ orbital period and apparent brightness. He calculated the stars’ masses, and then their absolute luminosities, and then their distance. His result was 3 million light-years instead of the 2.6 million that had been accepted.

One can presume that his measurements were accurate, at least to within 6%. But the assumptions that he took for granted were entirely erroneous:

NASA astronomers studied 38 compact galaxy clusters with the Chandra X-ray Telescope to “measure the precise X-ray properties of the [hot] gas” in them. They combined this with measurements from radio telescopes of the increase in energy of the cosmic microwave background (CMB) radiation coming from the direction of the clusters. Then they used the Sunyaev–Zel'dovich effect, in which radiation gains energy from electrons in proportion to the electron density, temperature, and physical size of a region, to calculate the physical size of the clusters. After that, a simple trigonometry calculation gave them the distance. Dividing the redshift-determined speed of the cluster by the distance gave them the new Hubble constant.

"The reason this result is so significant is that we need the Hubble constant to tell us the size of the universe, its age, and how much matter it contains," said NASA's Max Bonamente, lead author of the paper describing the results. "Astronomers absolutely need to trust this number because we use it for countless calculations."

But again, the precise measurements were joined with precisely erroneous assumptions:

As Arp wrote in Seeing Red, "The greatest mistake in my opinion, and the one we continually make, is to let the theory guide the model. After a ridiculously long time it has finally dawned on me that establishment scientists actually proceed on the belief that theories tell you what is true and not true!"

If you want on or off the Electric Universe Ping List, Freepmail me.

4 posted on 02/11/2007 3:06:34 AM PST by x_plus_one (As long as we pretend to not be fighting Iran in Iraq, we can't pretend to win the war.)
[ Post Reply | Private Reply | To 1 | View Replies]
To: Swordmaker
has determined that the Hubble constant (the rate at which the universe is expanding) is 15% lower than the accepted value. His measurements have a margin of error of 6%.

And what was the previously advertised margin of error? Its all well and good to include assumptions in science, but giant red flags need to be attached when set before the general public.

B.S. All real scientist are continuously aware of, and constantly question their assumptions. If scientist seem arrogant or cocksure occasionally, it is in response to critics who don't understand the assumptions or even realize that there are assumptions.

7 posted on 02/11/2007 5:59:53 AM PST by Lonesome in Massachussets (When I search out the massed wheeling circles of the stars, my feet no longer touch the earth)
[ Post Reply | Private Reply | To 1 | View Replies]
To: Swordmaker; RadioAstronomer
Because traditional astronomers never question traditional assumptions

It is not clear what a variation in a dimensionful quantity actually means, since any such quantity can be changed merely by changing one's choice of units. John Barrow wrote:

"[An] important lesson we learn from the way that pure numbers like á define the world is what it really means for worlds to be different. The pure number we call the fine structure constant and denote by á is a combination of the electron charge, e, the speed of light, c, and Planck's constant, h. At first we might be tempted to think that a world in which the speed of light was slower would be a different world. But this would be a mistake. If c, h, and e were all changed so that the values they have in metric (or any other) units were different when we looked them up in our tables of physical constants, but the value of á remained the same, this new world would be observationally indistinguishable from our world. The only thing that counts in the definition of worlds are the values of the dimensionless constants of Nature. If all masses were doubled in value [ including the Planck mass mP ] you cannot tell because all the pure numbers defined by the ratios of any pair of masses are unchanged."[5]

9 posted on 02/11/2007 6:21:41 AM PST by Lonesome in Massachussets (When I search out the massed wheeling circles of the stars, my feet no longer touch the earth)
[ Post Reply | Private Reply | To 6 | View Replies]
To: RadioAstronomer; Swordmaker The Speed of Light may be a local speed limit... we might be in a school zone...

13 posted on 02/11/2007 1:30:29 PM PST by Swordmaker (Remember, the proper pronunciation of IE is "AAAAIIIIIEEEEEEE!)
[ Post Reply | Private Reply | To 6 | View Replies]
To: Lonesome in Massachussets
It may be my lack of intelligence, but the wikipedia cite seems to me to be mostly gibberish, and tautological gibberish at that. My observation -- back in the 70s, incidentally -- was just that a decreasing value for c would mean that older light would have its wave crests farther apart, i.e., show a red shift, so that we could have a universe of fixed size which appeared to be expanding.

There are also some interesting secondary effects, such as much higher energy releases in distant/old processes because c^2 is much greater (quasars?) and a net loss of energy over time which might account for the time's arrow problem.

Thanks for the ping. Gads - more Halton Arp. LOL!