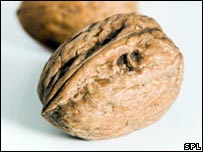 Eating walnuts at the end of a meal may help cut the damage that fatty food can do to the arteries, research suggests. It is thought that the nuts are rich in compounds that reduce hardening of the arteries, and keep them flexible.

A team from Barcelona's Hospital Clinico recommend eating an ounce (28g) of walnuts a day.

The study, which appears in the Journal of the American College of Cardiology, also showed walnuts had more health benefits than olive oil.

The researchers recruited 24 adults, half with normal cholesterol levels, and half with levels that were moderately high to the research, which was partly funded by the California Walnut Commission.

Each was given two high-fat salami and cheese meals, eaten one week apart.

For one meal, the researchers added five teaspoons of olive oil. For the other, they added eight shelled walnuts.

Tests showed that both the olive oil and the walnuts helped to reduce the sudden onset of harmful inflammation and oxidation in arteries that follows a meal high in saturated fat.

Over time, this is thought to cause the arteries to start to harden - and increase the risk of heart disease and stroke.

However, unlike olive oil, adding walnuts also helped preserve the elasticity and flexibility of the arteries, regardless of cholesterol level.

Arteries that are elastic can expand when needed to increase blood flow.

This takes time and patience.
Rake up the fallen nuts.
Spread them out on a sheet or tarp somewhere out of the weather. [and away from squirrels]
Let the hulls soften and rot off naturally.
Hit them with a high pressure hose to remove as much as of the hulls as you can.
Let them dry out again.
Put them in a sealed container such as a large galvanized trash can and either shake or roll the whole thing until as much as possible of the leftover dried hull bits are rattled off of the nuts.
Take 'em out and crack 'em.....:)

[or you could run over them with somebody else's car]....LOL!

Are they black walnuts? We used to have a black walnut tree and them buggers were hard to open with anything less than a hammer.

Heres a cool little site detailing everything about do it yourself walnut harvesting.

you could do what we do...We buy them at a grocery store!

To: blam
With 58% polyunsaturated oil(Long chain fatty acid) content I wouldn't call walnut healthy, and it's 12% Omega 3 content isn't as good as other sources.(Too much polyunsaturated oil content can lead to cancer, dibetes, arthritis, and a whole host of other degenerative diseases.)

Organic, unrefined, coconut oil(Medium chain fatty acid) would be my choice for the most healthy, and beneficial.(And before you yell, "but coconut is a saturated fat", remember it has zero cholesterol. Also saturated fat isn't stored as fat, it is burned for fuel without needing insulin to enter the cell - make a note of that if you're diabetic.)

There are many other benefits to coconut oil, search them out, you'll be glad you did.

i love walnuts. otoh, patton is allergic to them. he paid the
kids a penny a piece to collect up the walnuts out of our yard
one year. it cost him a fortune! now they just plow over them
with the mower. I tried to find coconut oil at the Albertsons yesterday.

They had Almond oil, Walnut oil, Canola oil, Peanut oil, Olive oil (I got a small bottle of extra virgin cold pressed OI, cost 12 bux for like 12 ounces), Corn oil, Safflower oil, and a couple others.

No flax oil or coconut oil, though.

I found coconut oil at the Wal-Mart grocery stores. Sunflower and Safflower are also good oils.

We have several black walnut trees on our property. Mowing the lawn is a real challenge in the fall. It's not hitting the nuts with the lawnmower (which I don't) it's trying to mow under the trees fast enough to avoid gettling kloncked on the head with one. I hate the sound of them landing around me, cause I know it's just a matter to time....

Also, djf, make sure you get the organic as opposed to the hydrogenated/partially hydrogenated coconut oil which is not good.