Politico Reporter: 'Most of Us Are Suffering Collective PTSD from 2016'
NewsBusters ^ | Mark Finkelstein

Tim, Tim: you're not supposed to say this out loud on national TV!

In what could be the most blatant admission of MSM bias witnessed in a while, Tim Alberta, Politico Magazine's chief political correspondent, admitted this morning that "most of us are suffering from this collective PTSD from 2016." 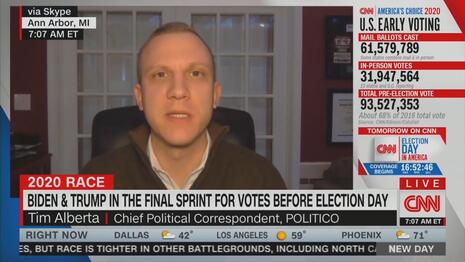 This guy admits that he and most of the liberal media are suffering “PTSD” from 2016. Lots of us are still grinning ear to ear!

Well get ready for the second bombing and put your big boy pants on and maybe slip under them a diaper. lol

But but but reporters aren’t biased, are they?????

It’s about to get much worse...

Has he got mice up his ass? What’s this “us” crap?

I was actually shocked that he said this. Politico would claim that it’s not partisan. But when its chief political correspondent admits to PTSD over Trump’s 2016 win??

Proving once again that Democrats only believe in democracy when they are allowed to steal elections.

‘PTSD’ = Permanent Trump Speciosity and Delirium - as horrible as a bad LSD Trip and near permanent in mental damage!

For those military people and others suffering from PTSD, this comment is an immense insult.

I am so stealing that. 😏

“most of us are suffering from this collective PTSD from 2016.”

I am Pavlov Dog salivating over the prospect of these people having to eat Trump sh_t sandwiches for another 4 years.

Can’t wait to to see the sobbing again after the election!

Kind of like how we felt under eight years of the Obamao occupation.

Yeah me too. After eight miserable years of Barrack Hussein Obama, followed by daily assaults, lies, impeachment, on our duly elected President. If that hasn’t been enough being called racist, deplorable, chump, ugly, smelly, dumb, and uneducated, for four years, I get it.

I don’t care what CNN, MSNBC, FOX, or your local radio stations declare about who is winning - you have one job tomorrow.
VOTE for DonaldJ Trump and Michael Pence
That’s it. Whether you’re ahead or behind according to the pundits - show up. Pull the lever. Don’t leave the line. Don’t be refused