Here’s how it could have played out. Chauvin’s boss/handler tells him he needs to do a hit on George Floyd. He’s told by his boss something to the effect ‘I want you to get that SOB and I want you to make him suffer. (Hence the long drawn out asphyxiation rather than a quick gunshot to the head.) And I want to see it. I’m sending so-and-so along with you to film it for me.” So he sends a friendly along with them to film it for their boss. Now that might seem like a stretch that Chauvin and his crew would not get suspicious that they were being set up, but remember that Chauvin had been getting away with this kind of stuff for years. After nine years of being protected, Chauvin probably viewed himself as untouchable and had no reason to believe that this event would be anything different.

As it turned out, the DS had bigger fish to fry and set him and his crew up. Once taken into custody the DS would make sure that he would be handled and interviewed by crooked cops and prosecutors only, so nothing but the DS sanctioned narrative would get out. 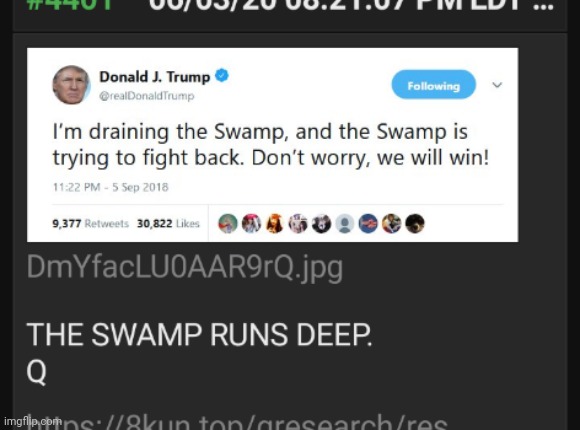 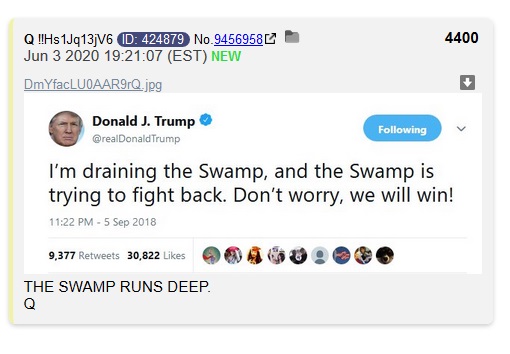 Wake up America, the Socialist Thugs have infiltrated and are attacking our Republic.

I feel sorry for the people who had businesses in the safe zones, they were set up.

I saw the IMDB and thought same (TBD) but had not seen anything about Floyd until the other night - the stuff presented looked the same - the title of the tweet was something like “tattoos match” - maybe the poster will recall. That looked like a match to me.

Apparently parts of NYC were safe zones, they released almost all of the looters that were arrested under a new bail reform law.https://www.foxnews.com/us/bail-reform-laws-let-alleged-criminals-back-on-the-streets-within-hours-threatening-public-security

THAT IS INSANE! THOSE “PEACEFUL PROTESTERS” are TOTALLY OUT OF CONTROL!

.@realDonaldTrump as Commander in Chief needs to order the military to stop kneeling.

The optics are beyond horrible.— John Cardillo (@johncardillo) June 4, 2020

Trump retweeted this 5 hours ago (only the link and headline and photo):


The nation must restore order. The military stands ready.

By Tom Cotton
Mr. Cotton, a Republican, is a United States senator from Arkansas.

This week, rioters have plunged many American cities into anarchy, recalling the widespread violence of the 1960s.

New York City suffered the worst of the riots Monday night, as Mayor Bill de Blasio stood by while Midtown Manhattan descended into lawlessness. Bands of looters roved the streets, smashing and emptying hundreds of businesses. Some even drove exotic cars; the riots were carnivals for the thrill-seeking rich as well as other criminal elements.

Outnumbered police officers, encumbered by feckless politicians, bore the brunt of the violence. In New York State, rioters ran over officers with cars on at least three occasions. In Las Vegas, an officer is in “grave” condition after being shot in the head by a rioter. In St. Louis, four police officers were shot as they attempted to disperse a mob throwing bricks and dumping gasoline; in a separate incident, a 77-year-old retired police captain was shot to death as he tried to stop looters from ransacking a pawnshop. This is “somebody’s granddaddy,” a bystander screamed at the scene.

But the rioting has nothing to do with George Floyd, whose bereaved relatives have condemned violence. On the contrary, nihilist criminals are simply out for loot and the thrill of destruction, with cadres of left-wing radicals like antifa infiltrating protest marches to exploit Floyd’s death for their own anarchic purposes.

These rioters, if not subdued, not only will destroy the livelihoods of law-abiding citizens but will also take more innocent lives. Many poor communities that still bear scars from past upheavals will be set back still further.

One thing above all else will restore order to our streets: an overwhelming show of force to disperse, detain and ultimately deter lawbreakers. But local law enforcement in some cities desperately needs backup, while delusional politicians in other cities refuse to do what’s necessary to uphold the rule of law.

The pace of looting and disorder may fluctuate from night to night, but it’s past time to support local law enforcement with federal authority. Some governors have mobilized the National Guard, yet others refuse, and in some cases the rioters still outnumber the police and Guard combined. In these circumstances, the Insurrection Act authorizes the president to employ the military “or any other means” in “cases of insurrection, or obstruction to the laws.”

This venerable law, nearly as old as our republic itself, doesn’t amount to “martial law” or the end of democracy, as some excitable critics, ignorant of both the law and our history, have comically suggested. In fact, the federal government has a constitutional duty to the states to “protect each of them from domestic violence.” Throughout our history, presidents have exercised this authority on dozens of occasions to protect law-abiding citizens from disorder. Nor does it violate the Posse Comitatus Act, which constrains the military’s role in law enforcement but expressly excepts statutes such as the Insurrection Act.

For instance, during the 1950s and 1960s, Presidents Dwight Eisenhower, John Kennedy and Lyndon Johnson called out the military to disperse mobs that prevented school desegregation or threatened innocent lives and property. This happened in my own state. Gov. Orval Faubus, a racist Democrat, mobilized our National Guard in 1957 to obstruct desegregation at Little Rock Central High School. President Eisenhower federalized the Guard and called in the 101st Airborne in response. The failure to do so, he said, “would be tantamount to acquiescence in anarchy.”

More recently, President George H.W. Bush ordered the Army’s Seventh Infantry and 1,500 Marines to protect Los Angeles during race riots in 1992. He acknowledged his disgust at Rodney King’s treatment — “what I saw made me sick” — but he knew deadly rioting would only multiply the victims, of all races and from all walks of life.

Not surprisingly, public opinion is on the side of law enforcement and law and order, not insurrectionists. According to a recent poll, 58 percent of registered voters, including nearly half of Democrats and 37 percent of African-Americans, would support cities’ calling in the military to “address protests and demonstrations” that are in “response to the death of George Floyd.” That opinion may not appear often in chic salons, but widespread support for it is fact nonetheless.

The American people aren’t blind to injustices in our society, but they know that the most basic responsibility of government is to maintain public order and safety. In normal times, local law enforcement can uphold public order. But in rare moments, like ours today, more is needed, even if many politicians prefer to wring their hands while the country burns.

I agree with the setup theory. They tell Floyd hey we will pay you a lot of money and put you in the witness protection program. We are going to arrest you and give you something to put you to sleep to make it look like you were killed. There are two possibilities from this point. 1. Floyd isn’t really dead and is living a new life. 2 ( more likely ) the intent all along was to kill Floyd, which they did. As for the cops, they were probably offered a lot of money as well, told that the victim would be given something to make it look like he passed out, a victim of police brutality. Now the cops’ families have probably been threatened if they talk.

That page disappeared. Better find some support for the claim.

I hope everyone beyond the trees reads this conversation.
There is no predicting.
There is no cult activity.
Just normal sentient beings taking note of items of importance.
With n o expectations, we wait.
As the day and hours passes, we aren’t disappointed just waiting.
No apologies no fat-guy mea culpas.
We talk, we poke at each other and continue in a certain hope that...
IT’S HABBENING.

I’ve considered aspects of that ... somebody believed they saw something to the effect some woman reported Floyd was saying, “you weren’t supposed to kill me” or something like that and the inference was that Floyd was paid or played (pawn) or played along in some way and didn’t know what he’d gotten himself into.

Eric Schmidt is AG of Missouri. One of the state prosectors, who was funded by Soros in her election a few years ago, let them all looters, rioters etc go.