You hit the Q Jackpot 4ever tonight! 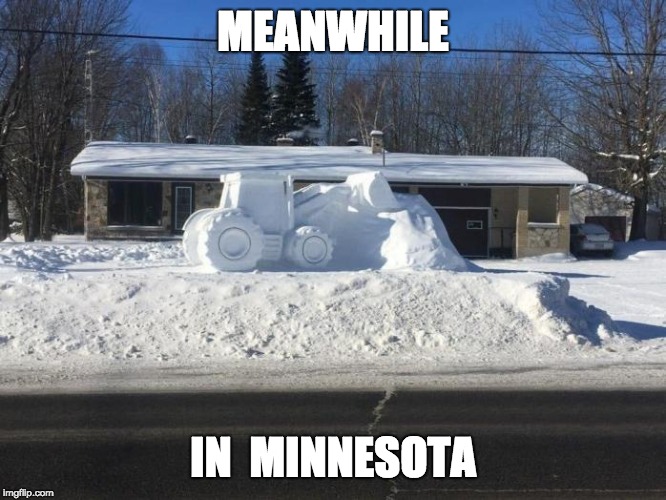 We're getting another 10" on Saturday through Sunday.

Where you at? I used to live in Southern/Central Minnesota. Now in Western South Dakota.

What’s the significance of a yellow tie?

Manafort was targeted only because he worked for Trump and only in hopes of getting him to make up lies against Trump. He was not on anyone’s radar, and would never in 100 years have been pursued criminally except for the fact that he was Trump’s campaign manager. When Podesta gets prosecuted, I may care about Manafort’s minor crimes. Until then, he should get a full pardon.

Amorous Cetaceans 'R' Us
We Deliver!

I think it is!
Whichever of us gets in before 100 posts on a new thread should try to repost it! Housekeeping stuff!

Considering your presentation of further information, I will reconsider.

All that snow - too bad the cartels don't want to ship it to the Europeans. 153 posted on 03/07/2019 7:31:07 PM PST by grey_whiskers (The opinions are solely those of the author and are subject to change with out notice.)
[ Post Reply | Private Reply | To 144 | View Replies]
To: Pete from Shawnee Mission
Whichever of us gets in before 100 posts on a new thread should try to repost it! Housekeeping stuff!

Ach, B.R. I do that sort of thing all the time!

Yesterday's Q drop about Hannity where Hannity said he'd heard "justice would be done" and the comment I heard his 'sources' were pretty good.; along with a picture of a shiny ink pen with a distorted reflection in it.

The only thing people could agree about on the reflection, is that whoever it was, was wearing a yellow tie.

Q has mentioned this guy’s name TWICE without accompanying explanation. He has stated in #1539 that the information about him, especially in the NY Mag article, is “important to remember.”

[ Q saying “Important to remember” comes across to me like a professor saying those words and implying he or she is giving us an exam gimme! EZRA COHEN WATNIK IS IMPORTANT TO REMEMBER!]

The NY Mag article makes mention of where Cohen-Watnick worked after McMaster booted him: ORACLE.

Let’s examine that and remind ourselves of what/who ORACLE is:

Aside from FReeQs associating the word “Oracle” with our own FReeQ newspaper, published on our Q threads by our Editor in Chief, FReeQ Bagster, what Oracle means in this present context is:

“Oracle Corporation is an American multinational computer technology corporation headquartered in Redwood Shores, California. THE COMPANY SPECIALIZES PRIMARILY IN DEVELOPING AND MARKETING DATABASE SOFTWARE AND TECHNOLOGY, CLOUD ENGINEERED SYSTEMS, AND ENTERPRISE SOFTWARE PRODUCTS — PARTICULARLY ITS OWN BRANDS OF DATABASE MANAGEMENT SYSTEMS. IN 2018, ORACLE WAS THE THIRD-LARGEST SOFTWARE MAKER BY REVENUE, AFTER MICROSOFT AND ALPHABET.

History
“Larry Ellison co-founded Oracle Corporation in 1977 with Bob Miner and Ed Oates under the name Software Development Laboratories (SDL). Ellison took inspiration from the 1970 paper written by Edgar F. Codd on relational database management systems (RDBMS) named “A Relational Model of Data for Large Shared Data Banks.” He heard about the IBM System R database from an article in the IBM Research Journal provided by Oates. Ellison wanted to make Oracle’s product compatible with System R, but failed to do so as IBM kept the error codes for their DBMS a secret. SDL changed its name to Relational Software, Inc (RSI) in 1979, then again to Oracle Systems Corporation in 1982, to align itself more closely with its flagship product Oracle Database.

At this stage Bob Miner served as the company’s senior programmer. On March 12, 1986, the company had its initial public offering. In 1995, Oracle Systems Corporation changed its name to Oracle Corporation, officially named Oracle, but sometimes referred to as Oracle Corporation, the name of the holding company. Part of Oracle Corporation’s early success arose from using the C programming language to implement its products. This eased porting to different operating systems (most of which support C)….”

This is a long article, and the various areas of service, including (but not limited to) Oracle Cloud, Hardware, File systems, Operating Systems, and support are outlined.

Following are a few notes I made on the fly which caught my attention as I did not have time to do a transcript, or even full topic coverage. I make no promises as to their accuracy, but I think they are reasonably close to what was conveyed:

He made the point that ALL of the biggie tech companies actually use Oracle work product.

He supported Marco Rubio. He says he also was a big contributor to Bill Clinton - neither Repub or Dem.

He was good friends with Bill Clinton and Tony Blair and Rubio, “because they are centrists”

BIG COMPETITOR IS CHINA, AND WE SHOULD NOT LET ITS ECONOMY PASS US UP. HE WANTS TEAM USA TO DEVELOP AND PROTECT OUR INTELLECTUAL PROPERTIES. CHINA IS OUR FIRST SERIOUS COMPETITOR SINCE 1930S.

HE COMMENTS ON THE GOOGLE REFUSAL TO ENTER INTO US MILITARY,… AND YET GOOGLE GOES INTO CHINA AND IS WILLING TO CENSOR THE PEOPLE THERE.
HE WANTS CAPITALIST SYSTEMS TO BE VICTORIOUS OVER COMMUNIST SYSTEMS.

He has a charitable foundation for health issues “Cures not Care” - supporting wellness, not cures for sick people.

He said if he had it to do over, he would be going into biotech.

He wants to see improvements in nutrition and education for children in 3rd world.

“China is our big competitor”
https://www.youtube.com/watch?v=o9xBtUuWh-w

This, ladies and gentlemen, is who Ezra Cohen-Watnick was working for/with.

While Oracle, Q, and the Trump administration are close mouthed about Ezra’s role at Oracle, it does seem as though Ellison has been generously backing someone whom the other reports have noted in connection to Ezra: David Nunez.

Excerpt from the NY Times article, which is the one Q posted TWICE:
“…National Security Council aides usually draw little public scrutiny, but Mr. Cohen-Watnick was swept up in the tumult of early 2017 when Mr. Trump accused the previous administration, without evidence, of wiretapping his phones at Trump Tower.

MR. TRUMP’S ALLEGATIONS WERE BOLSTERED BY REPRESENTATIVE DEVIN NUNES OF CALIFORNIA, THE REPUBLICAN CHAIRMAN OF THE HOUSE INTELLIGENCE COMMITTEE, WHO SAID HE HAD EVIDENCE THAT MR. TRUMP’S COMMUNICATIONS WERE INCIDENTALLY SWEPT UP IN SURVEILLANCE OF FOREIGNERS BY AMERICAN SPY AGENCIES.

MR. NUNES DID NOT DIVULGE THE SOURCES OF THIS INFORMATION, BUT AMERICAN OFFICIALS LATER TOLD THE NEW YORK TIMES THAT MR. COHEN-WATNICK, AT THE INSTRUCTION OF TWO SENIOR WHITE HOUSE OFFICIALS, HELPED PRINT INTELLIGENCE REPORTS THAT LATER SERVED AS MR. NUNES’S PROOF….”

[EZRA HAS THE GOODS which “bolsters” Trump’s claims of “wiretapping.” In other words, it appears to me as though he HAS THE PROOF of that spying.]

And so now, lookie here!

This may be of interest to our own Oracle living in Nunez’ district - bagster - as well as our other California FReeQs!

“The Daily Beast reports that top Oracle executives have given so much money to Rep. Devin Nunes’ reelection campaign that some contributions had to be returned.”

“What made the donations stand out, however, was not the size of them—$35,000 was a relatively small amount considering the more than $1.2 million that Nunes has raised so far this cycle. It was the timing of the giving,” Markay writes.”

“COHEN-WATNICK AND FLYNN ARE CLOSE POLITICAL ALLIES OF NUNES, A REPUBLICAN WHO CHAIRS THE HOUSE INTELLIGENCE COMMITTEE.”

“Flynn, a retired U.S. Army general, pleaded guilty in December to lying to the FBI about conversations with Russian Ambassador  Sergey I. Kislyak in late 2016.”

Ellison Is a Political Outlier in Silicon Valley

“In addition, Markay explains that “Oracle is a Republican outlier in Silicon Valley, and its executives’ right-leaning politics (and political contributions) present opportunities in Trump’s Washington unavailable to competitors like Amazon, a frequent target of (President) Trump’s ire.” Oracle’s chairman and chief technology officer is Larry Ellison. Forbes estimates Ellison’s financial worth is $58.9 billion.”
Nunes Has History of Landslide Victories

“Nunes, of Tulare, customarily wins reelection by landslide margins in a district with a large Republican voter registration edge.”

“This year, three Democrats are challenging Nunes in California’s 22nd District. One of them, Fresno County assistant district attorney Andrew Janz, is receiving national attention. That attention is largely the result of Nunes’ controversial chairmanship of the House Intelligence Committee.”

“THE DAILY BEAST STORY GOES INTO GREAT DETAIL ABOUT COHEN-WATNICK’S RELATIONSHIP WITH NUNES. IT ALSO EXPLAINS WHY SOME OF THE ORACLE DONATIONS HAD TO BE RETURNED. YOU CAN READ THE STORY AT THIS LINK.”

[Following is the link referred to:]

Right in the middle of the mess! Sorry! We fled!