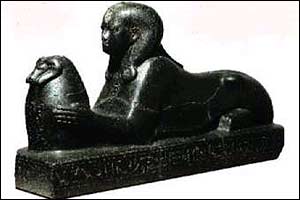 The Nubian kings ruled 2,500 years ago

A team of French and Swiss archaeologists working in the Nile Valley have uncovered ancient statues described as sculptural masterpieces in northern Sudan.

The archaeologists from the University of Geneva discovered a pit full of large monuments and finely carved statues of the Nubian kings known as the black pharaohs.

The Swiss head of the archaeological expedition told the BBC that the find was of worldwide importance.

The black pharaohs, as they were known, ruled over a mighty empire stretching along the Nile Valley 2,500 years ago.

The pit, which was full of ancient monuments, is located between some ruined temples on the banks of the Nile.

Inside, the archaeologists made a breathtaking discovery.

The statues of the black pharaohs are highly polished, finely carved and made of granite.

The name of the king is engraved on the back and on the feet of each sculpture.

The head of the expedition, Charles Bonnet, described them as very beautiful.

He told the BBC they were sculptural masterpieces.

They were important not just for the history of Sudan but also for world art.

The Nubians were powerful and wealthy kings who controlled large territories along the Nile.

Their land was known as the Kingdom of Kush.

They controlled the valuable trade routes along the river but were eventually conquered by their neighbours from the north.

The ancient Egyptians made the pit into which the monuments and statues were piled.

Many of the sculptures were savagely destroyed, with smashed heads and broken feet.

Professor Bonnet says that this shows that the Egyptians were not content with simply conquering Kush.

They also wanted to obliterate the memory of the black pharaohs and their unique culture from the face of the earth.

TOPICS: News/Current Events
KEYWORDS: 25thdynasty; afrocentricity; afrocentrism; archaeology; black; blackathena; blackpharaoh; blackpharaohs; blacksparkwhitefire; ethiopiandynasty; ggg; godsgravesglyphs; history; memnon; nubiandynasty; pharaoh; richardpoe; sphinx; trove; uncovered Navigation: use the links below to view more comments.
first 1-20, 21-30 next last
1 posted on 01/20/2003 2:39:12 PM PST by blam
[ Post Reply | Private Reply | View Replies]
To: spetznaz
Ping.
2 posted on 01/20/2003 2:41:32 PM PST by swarthyguy
[ Post Reply | Private Reply | To 1 | View Replies]
To: mhking
ping.
3 posted on 01/20/2003 2:44:31 PM PST by spetznaz (When i say i am perfect people say i am arrogant .....but i am just being darn honest!)
[ Post Reply | Private Reply | To 2 | View Replies]
To: blam
""Many of the sculptures were savagely destroyed, with smashed heads and broken feet.
Professor Bonnet says that this shows that the Egyptians were not content with simply conquering Kush. They also wanted to obliterate the memory of the black pharaohs and their unique culture from the face of the earth.""

Is Prof. Bonnet accusing the Egyptians of genocide?

Check the Black Diana. How'd she get in here?

I checked the article soure.

The post is almost identical to the original article in format.

The also found this:

Almost? I didn't change a thing, it's exact.

That would be BBC.

Web editors, as a rule, have a loathing for long paragraphs. There is an unattributed suspicion that web readers are converts from TV and, thus, have short attention spans. It must be the video monitor vs TV set thing.

I'm a writer and, up to a point, I agree with them. I try to keep my paragraphs in compact four and five line groups -- just so that the format is more inviting, graphically. It is, by the way, also a good way to discipline your self-editing.

But some web editors (like this one, evidently) are incapable of distinguishing between the definition and purpose of a sentence vs a paragraph.

Does this mean the brothers were being profiled back in Ancient Egypt ??