I wrote about how Elon Musk discovered “Stay Woke” t-shirts in a Twitter closet as he continues to sort out things at the headquarters. That says so much about the liberal nature of the platform before Musk.

Musk also noted that the shirts go back to the time of the shooting of Michael Brown and the protests/riots in Ferguson. He also linked to the report of the Obama DOJ, noting that the shooting was in self-defense.

That set off people on the left even more because they had to deal with the reality that their beliefs that they may have held about that shooting for years were fiction. That couldn’t be, so it had to be that Elon was a racist person from South Africa, even if the Obama DOJ agreed with him. You still had some in media like Gizmodo write purulent garbage. Even the tweet to their article had a potentially misleading picture.

How dare Musk post the truth! That fiend! The cop didn’t just claim it was in self-defense, the evidence and the investigations supported that it was. Gizmodo knows that, but they still want to pump the anger, rather than the truth.

But liberals don’t want the truth and that’s what Musk has truly been showing with his takeover of Twitter.

The left knew it was in self-defense, they just wanted the riot for political gain.

George Floyd died from an anally self-administered overdose of fentanyl. What a role model of America’s youth!

3 posted on 11/24/2022 9:40:39 AM PST by Lonesome in Massachussets (Forsan et haec olim meminisse iuvabit.)
[ Post Reply | Private Reply | To 1 | View Replies]
To: rktman
Two minutes left to this poll. I expect he'll follow through like he did with reinstating Trump. Not sure if this will include Alex Jones as Musk has already flatly stated no to that. 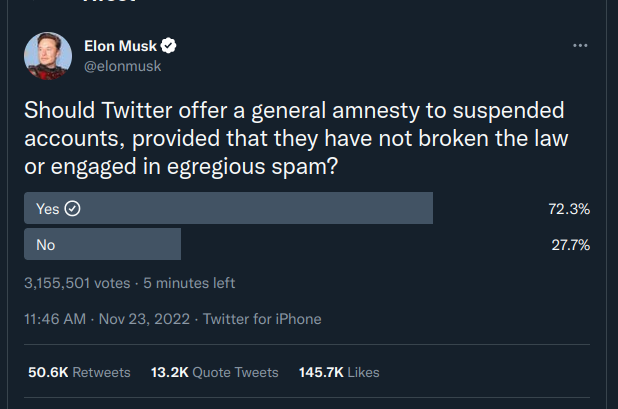 A Great Reset I can get behind.

i think musk is telling us....i won’t tell you what to read...but don’t believe everything you read...in other words...do a little research...

The closet full of #staywoke t-shirts really wasn’t anything we didn’t suspect already but it certainly validated an awful lot of those suspicions. This was not a corporation, it was a cadre of 7000 ruling-class mind-control gnomes and about 100 actual workers, a perfect model of a post-modern Woke society. The ones let go do have a Twitter entry on their resumes to comfort them but may find that more of a hindrance than a benefit. “And tell me, who did you love to censor and oppress in your time at the big T? And who would you like to oppress here?” Might be worth asking that question just to hear the answer.

Just like the latest Club Q shooting that is immediately labeled a hate crime motivated by right-wing intolerance. No actual facts needed.

My Mom used to say:

You can’t believe everything you read in the paper.

I go through a LOT of grains of salt. 😎👍

I was 17...and our All Girls Catholic School had a rally for kfk...it was then that dad sat me down and told the story of boot legging joe...

Thanks to you having given your age I figured out the typo-—JFK-—and all the other pieces fall into place.

Getting people to accept his definition of “egregious spam” will be interesting. We don’t know what his criteria for that will be. But I’m a supporter of what he’s doing in general.

Musk is a data driven person with little patience for false narratives and the woke elites screwed up by attacking him.

While I do not agree with Musk on many things you have to smile.

Elon bought their biggest stadium, fired their star players and referees, and now he is using “their platform” to effectively punch them in the nose.

Now you can see what people (like Trump) really said at the time.

“Hands up; don’t shoot!” was a lie from the very beginning.

I’m sure some people believed it, but it was ABSOLUTELY debunked during the trial.

I can’t blame low information voters who still believe it, but they need to know the truth. Our Media is guilty in spreading this lie, and further smarter Leftists on Twitter, who know the real story but still lied. Black Lives Matter was born, and the grifters hopped on to the cash train.

Michael Brown was a thug, and actually murdered himself; suicide by cop.

18 posted on 11/24/2022 11:04:06 AM PST by Alas Babylon! (Rush, we're missing your take on all of this!)
[ Post Reply | Private Reply | To 1 | View Replies]
To: Billthedrill
The Twitter employees convinced themselves that they had unique skills.
What Twitter really boils down to is a post office/ file sharing app.
Text, photos, and videos are transferred from point a to point b with a list associated with each user of where they are delivered.
There is some analysis for advertisers of the traffic.
It's not like they had to write code to drive a car, or land a rocket on a barge at sea.
What they really hate is Elon uses this.

To reiterate: “No amount of evidence will ever persuade an idiot!”. Mark Twain. 😁👍