Ukraine’s announcement has not met with much enthusiasm in Washington: In response to Kyiv's fast-track application for NATO membership, Jake Sullivan, the U.S. President's National Security Advisor, said that it was “not the right time” for Ukraine’s admission to the alliance. He said he believes the best way to help Ukraine is to provide practical assistance “on the ground.”

No surprises, they have been rejected since 1991.

Can we all agree now that Vlad has won. Vlad is demilitarizing the Ukies, Biden and the EU have turned down their NATO admission, ( betrayal, like I mentioned ) now Vlad just needs to denazify the Ukie government, all his stated objectives are met.

Sorry Ukie war cheerleaders, you now have come to that “ Biden” moment. Careful whom you back, your emotions always cloud your judgment.

Joe made a speech on how we would defend Ukraine, every inch of them. So if they are approved into NATO, Joe has to commit US troops and have a direct war with Russia. Zen just boned Joe and put him on the spot

America is out of money we need less free loaders

Yeah right. And I overpaid my taxes by $200k and will soon file for a refund. 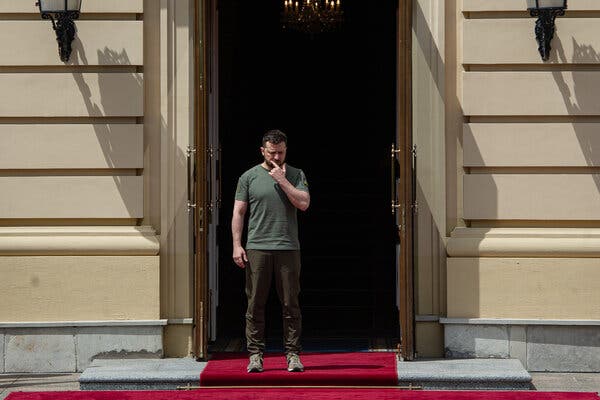 NATO is a defensive alliance. It wants borders to be settled. Admission could be part of a negotiated peace in which borders, wherever they are, are recognized; but, not before such a peace.

In theory, admission could have been affected back when Ukraine’s borders were non-controversial. But, that would have been premature. Nobody anticipated Russia sliding into corruption and economic decline, and then turning more and more paranoid and belligerent.

Also, it wasn’t clear back then that Ukraine wanted to join the west. More probable back then, Ukraine would be a country of transition from west to east, with a mix of languages, religions and cultures.

Again back then, it was thought, or maybe I should say it was hoped that Russia - spurred by its great wealth in natural resources - would gradually develop economically and politically and maybe join NATO or make NATO obsolete. (We had similar hopes for China.) But, Russia succumbed to what we call “the resource curse,” with oligarchs scrambling to steal as much and as fast as they could. About a dozen of these oligarchs have died so far this year by slipping on a bar of soap and falling over a ten-story balcony.

Now we find ourselves where we are, engaged in a limited war the exact meaning of which in constantly in play. Russia is losing very badly and the Russian Federation risks collapse. The former Soviet Union hung on for twenty years in Afghanistan before it collapsed. I really don’t think this war will take so long, the pace of this war being much quicker. And, nobody can be sure what Putin will do in response to the accelerated pace of losses Russia is facing.

SICKENING to see that Biden is now a Putin Puppet.

Biden is going to p*** off Zelensky...but if we send more money, we can still be friends.

Any hope Ukraine had to join NATO and the EU went down the drain when this war started.

Ukraine is a basket case at this point.

They don’t even realize yet (at least the average person) how bad it is. ~1/3 of this entire nations GDP which shrunk by 14% in 2022 is US and EU aid which will dry up sooner than later.

20% of their landmass lost. 20% of their population lost. A major port city and industrial area lost. Thousands dead, millions displaced, instability in government, a damaged infrastructure and unlike 2014 there will be no post war bounce back from this one.

Sometimes pushing too hard and shooting for the stars isn’t a good idea. Sometimes the measured, long term approach, a “real politik” (as in the German concept) is the best approach.

Worst of all, none of this had to be! It was all foreseeable both that it would happen and what the outcome would be.

And even worse, you cannot blame the Russians, i.e. they have cause for what they did and if anything the just war concept is on their side here: Misk, ballistic missile treaty, NATO East expansion.

We gambled high and lost. That’s all this really boils down too. Our gamble was that with years of treaty violations and arming/training Ukrainian forces we would make the price/cost so high that Russia would acquiesce and we could get our way, in complete disregard to the Russian position. That didn’t quite work out.

The sad thing here is that peoples lives, the economic prosperity of millions was gambled with in a way which was reckless and irresponsible. The probability of war was high, the magnitude immense and hence the risk was off the charts. The ROI was minimal since Ukraine already enjoyed a special status with the EU and likely would have gotten admitted (with Russian approval). Likewise Ukraine already enjoyed NATO training exercises, weapons, etc.

What was the great need for NATO admission?
https://www.reuters.com/world/europe/ukrainian-president-zelenskiy-holding-talks-with-biden-adviser-says-2021-12-09/

This was no rational decision making unless you factor in the need to show a political and international success to bounce back from the Afghanistan debacle. A foreign affairs political success story.

The insanity here is that Ukraine which is a failure even bigger than 2014 is sold as a success story. This is only possible because everyone is in board. The Euros, US, big US and Euro corporations, the MSM which is favorable to Democrats but also beholden to the corporations and oligarchs running the West. You have wide spread media censorship. So all you get is a one sided and highly biased reporting even as reality is heading in the opposite direction. In the West we love to use the word propoganda when talking about RT etc. yet we are as bad if not worse (not even fact based and direct copy and paste jobs from Ukraines information ops).

Biden should get a kick in the rear for this like he did with Afghanistan. But that will never happen. This is a epic failure where Biden can deflect blame, even though this was 100% his doing. The bad guy of course will be Putin who has mental issues (unlike Biden who is on top of his game), Putin who lied and cheated (unlike us with NATO East expansion and Minsk), Putin who armed bad folks (unlike us with Azov and a mercenary army we paid for de facto, which we would rather quickly forget)...

We’re not the good guys and it’s a failure. Glad our leaders aren’t to blame for anything.

This wasn’t Biden’s doing, no way, not in the least! (Sarc)
https://www.reuters.com/world/europe/ukrainian-president-zelenskiy-holding-talks-with-biden-adviser-says-2021-12-09/ 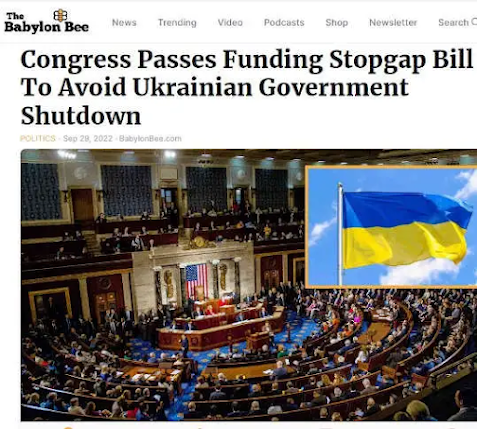 You have to wonder how many brave Ukrainian soldiers died to get the Lyman “Narrative War victory”...

Admitting Ukraine means committing NATO forces to defend Ukraine in the middle of a war. It’s a complication they want to avoid.

Of course, who is supporting Ukraine’s application? None other than the Prime Mistake of Canaduh, True-dolt!

Of course, True-dolt is a ‘brother’ of Zelenskyy, both being poodles of K(louse) (anal)Schwab. As Mark Rutte is a fellow WEF poodle, the Netherlands will join Canaduh in voting for Ukraine membership. I could see Zelenskyy getting in. (Anal)Schwab and his gang of psychotic fascists will buy as many votes as they need, to get Ukraine into NATO.

This will push Russia even further, but XiJinBiden will have an ‘out’ from blame for this by voting against Ukraine. The WEF wants to ‘burn it all down’, so they can take over. Yes, they are THAT EVIL!

Get your potassium iodide pills, while you can still get ‘em!

Good post. It was clear to see from day one, Biden would somehow betray ( intentionally or not) and fail Ukraine, ( also the EU) from his ill thought out sanctions, weaponizing the dollar, to throwing billions of US taxpayers money into the Ukie corrupted black hole.

Why can not anyone see EVERYTHING senile Joe supports, mandates or instates either fails or cripples the US?

I have no respect for the corrupted little beggar Zelensky, he made a deal with the Devil, and the Devil will devour him.

People seem to be finally waking up, it seems clearer everyday Zelensky will be ousted, either politically, or militarily ( 9 mm to the head). The Ukie population deserved much, much better….but then again, they voted the corrupted comedian into office. They are now coming to the realization fighting Vlad down to their last Ukrainian was not a joking matter, enlisting to become a lowly pawn in Biden’s war cost them their future.

“Pursuant to a delegation of authority from the President, I am authorizing our fourteenth drawdown of arms and equipment from U.S. Department of Defense inventories for Ukraine’s self-defense since August 2021 of up to $50 million,” Secretary of State Antony Blinken announced in a July 1 statement.…”