Wisconsin's second-largest school district won't back off a policy of keeping minor students' transgender experimentation secret from their parents despite a new lawsuit filed Tuesday.

Wisconsin’s second-largest school district so far won’t back off a policy of keeping minor students’ transgender experimentation secret from their parents despite a new lawsuit filed Tuesday.

A group of parents represented by Wisconsin Institute of Law and Liberty sued after the Madison Metropolitan School District refused to alter its policy of concealing childrens’ transgender behavior and related medical records from parents, no matter how young the child is. The district oversees children as young as preschoolers, and teaches gender identity politics to all ages, which research suggests may contribute to children identifying as transgender.

Among other things, the district’s policy at the heart of the lawsuit states: “School staff shall not disclose any information that may reveal a student’s gender identity to others, including parents or guardians and other school staff, unless legally required to do so or unless the student has authorized such disclosure.” It also says school staff will “discuss with the student contingency plans in the event that their privacy is compromised.”

Fourteen parents of children who attend Madison schools sued on grounds the policy violates their parental rights and longstanding requirements for parent approval of much less affecting activities such as attending prom and taking Tylenol. One of their court filings notes the district’s deceptions include “to evade the state law that requires Wisconsin schools to give parents access to all education records, the [Gender Support Plan] form directs teachers to keep this paperwork ‘in your confidential files, not in student records.'”

“MMSD prioritizes working in collaboration with families to support our students and it is always our preferred method of support. MMSD must also prioritize the safety and wellbeing of every individual student who walks through its doors each day. It is with this focus, the district stands by its guidance document on transgender and non-binary students, and recognizes its tremendous responsibility to uphold the right of every child to be educated in a safe, all-inclusive and nondiscriminatory learning environment,” said a Tuesday statement from Public Information Officer Tim LeMonds in response to the lawsuit. LeMonds said the district wouldn’t discuss the lawsuit until its lawyers had reviewed it.

Madison schools oversee approximately 27,000 students and spend $15,000 per student per year, according to federal records. On the latest state tests, which are of lower quality than independent tests such as the National Assessment of Educational Progress, 61 percent of Madison’s students were not proficient in reading and 59 percent were not proficient in math. In both cases, Madison students scored below state averages.

What Madison Schools Do Teach Kids

Madison’s transgender policy document tells teachers and staff how to handle a variety of LGBT issues. It says gender dysphoric children may wear opposite-sex clothing and participate in opposite-sex locker and changing rooms. “Transgender, non-binary, and gender-expansive students may request time to address their class about their gender identity and pronouns,” the guide says.

In 2017 at a California public school, a kindergartener did this sort of “gender reveal” to classmates, who went home afterwards with tears and confusion to parents who had not been informed of the event beforehand. Last year in a Madison elementary school, a male science teacher showed all the K-5 students a “gender reveal” video to come out to the children as transgender.

Madison’s policy document tells teachers explicitly to “Teach about gender! Include books and lessons that are inclusive of all identities and send messages of empowerment to students.” A district website guiding teachers how to do this provides book lists and lesson plans from a nationwide program called Welcoming Schools, run by the LGBT activist group Human Rights Campaign.

The Madison schools’ “top picture books” list from HRC recommends titles for preschoolers through early elementary children, including the book by transgender celebrity teen Jazz Jennings “I Am Jazz,” which tells children they can have boy brains in girl bodies. HRC and the National Education Association, the nation’s largest teachers union, sponsors annual readings of “I Am Jazz” in public schools and libraries.

Madison’s recommended classroom list also includes a picture book for grades one to three about Harvey Milk, “Pride: The Story of Harvey Milk and the Rainbow Flag.” Milk repeatedly had sex with underage boys, according to his biographers.

Another Madison schools-recommended book, for grades preschool to two, is titled “Jacob’s New Dress.” For grades four to six — children ages nine through twelve — the district recommends the book “Queer Heroes: Meet 53 LGBTQ Heroes From Past and Present!” and one for grades five to nine the list summarizes this way: “Zenobia July is starting a new life in Maine with her aunts. People used to tell her she was a boy; now she’s able to live openly as the girl she always knew she was.”

A parent whose kindergartener attends a Madison elementary school sent The Federalist screenshots of a coloring book he says his daughter was sent home with for Black Lives Matter Week this February. Besides informing five-year-olds what transgender and queer mean, it also celebrates the Black Panthers and and the long-standing Communist Party goal of “Disrupting the Western-prescribed nuclear family structure.” The district’s transgender policy also pledges it to “model gender-inclusive language that…disrupts the gender binary.”

Selected coloring book pages that match what the father sent are below, obtained from BlackLivesMatteratSchool.com. That website also shows videos of elementary schoolers in Milwaukee public schools, Wisconsin’s largest school district, waving a “Pan-African” flag instead of an American flag. The man who inspired the flag says its red stripe represents communism (“the reds of the world”). Both the coloring book and the recommended LGBT books equate African-Americans’ equal rights with LGBT special rights, even though race is inborn and unchangeable while sexuality is a fluid behavior for which researchers still cannot find a genetic component.

LeMonds said the coloring book was likely a single teacher’s lesson decision and was not recommended by the school district like the LGBT books above.

As a result of the district’s social conditioning efforts with kids, “Now being an [LGBT] ally gains kids social capital, and now being an ally is cool,” says Kristi Nelson, a Madison school psychologist, in a video about the Welcoming Schools program. This is the kind of social environment a Brown University researcher found may contribute to a “social contagion” in which children who are often sad or distressed for other reasons find desperately needed positive attention in identifying as transgender.

This Sort of Thing Is Cropping Up Everywhere

This isn’t just happening in Madison, which has long been a far-left city. The Wisconsin Department of Public Instrution recommends similar resources from LGBT activist group GLSEN. And the U.S. Court of Appeals for the 7th Circuit, which oversees Wisconsin, Illinois, and Indiana, in 2017 upheld a Wisconsin transgender student’s demand to use opposite-sex bathrooms and locker rooms.

“The decision makes the 7th Circuit the first appeals court to interpret both Title IX and the Constitution as protecting transgender students from discrimination — and requiring schools to allow transgender students to use the bathroom matching their gender identity,” reported the Washington Post.

Luke Berg, an attorney representing parents through WILL, said in an interview, “I haven’t done an extensive survey in Wisconsin although I’ve heard that other districts have similar policies. Madison’s is probably the worst but I think a lot of these groups are telling schools that this is what they have to do, that this is legally required, that students have a legal right to exclude their parents.”

The suing parents seek a preliminary injunction to keep Madison’s transgender policy from affecting children as the lawsuit is worked out. That injunction, however, would not apply to the LGBT picture books, coloring books, and other materials Madison teachers are showing kids in class. It would only apply to the district’s policy of hiding children’s dysphoria from parents after the dysphoria has manifested.

“So, by enabling and encouraging children to transition at school without parental consent, the District may be pushing children down that path, causing gender dysphoria to persist when it otherwise would have desisted,” the parent’s injunction application says.

A hearing on the case is likely by April, with a court decision expected a month or two afterward, Berg said.

The state knows better than parents what’s best for a child.

pushing against the madness...

this will not end well.

These govt scum are despots and deserve the traditional punishment for such.

I have been asked twice in recent months by hospital clerks registering me for CAT scans if “I identify as the same gender I was born!”

I immediately asked the ladies who asked me that insulting question “Who prompted this line of questioning?” and told them that I was “highly offended!”

HHS is requiring this question to be asked, and, apparently, there is no way to complain to the REAL BOZO behind this nonsense!

Somehow, someway, we “NORMALS” have got to stop this gender identity confusion BS!

I AM NOT GENDER CONFUSED!

A person that is gender confused is a defective human

This problem, probably nationwide, may lead to some creepy people having their heads bashed in with baseball bats.

I know Boomers get a lot of flack, but can you imagine what would have happened if some school “officials” did such a thing back in the day?

So, the schools tend to know of the student’s mental illness before the parents do? That does not pass the smell test!

Yep. Call things what they are. He or she as equipped at birth. It for the geldings.

Do NOT use the admittedly convenient "GAY"; stick with homosexual for polite use, queer, homo, fag, etc. for disparaging commentary.

I would not be surprised if the schools are not purposefully grooming kids in that direction.

I agree with Bernie - we should be more like Denmark and Sweden where parents are given school vouchers to pick the school, including private one, that they want to send their kids to.

Get this out and around your town

A Freeper on another thread once said, "There are 2 sexes, everything else is a mental health issue."

I think that pretty much sums it up.

Oh look, it's been a couple months so they had to invent a new bullsh it term. 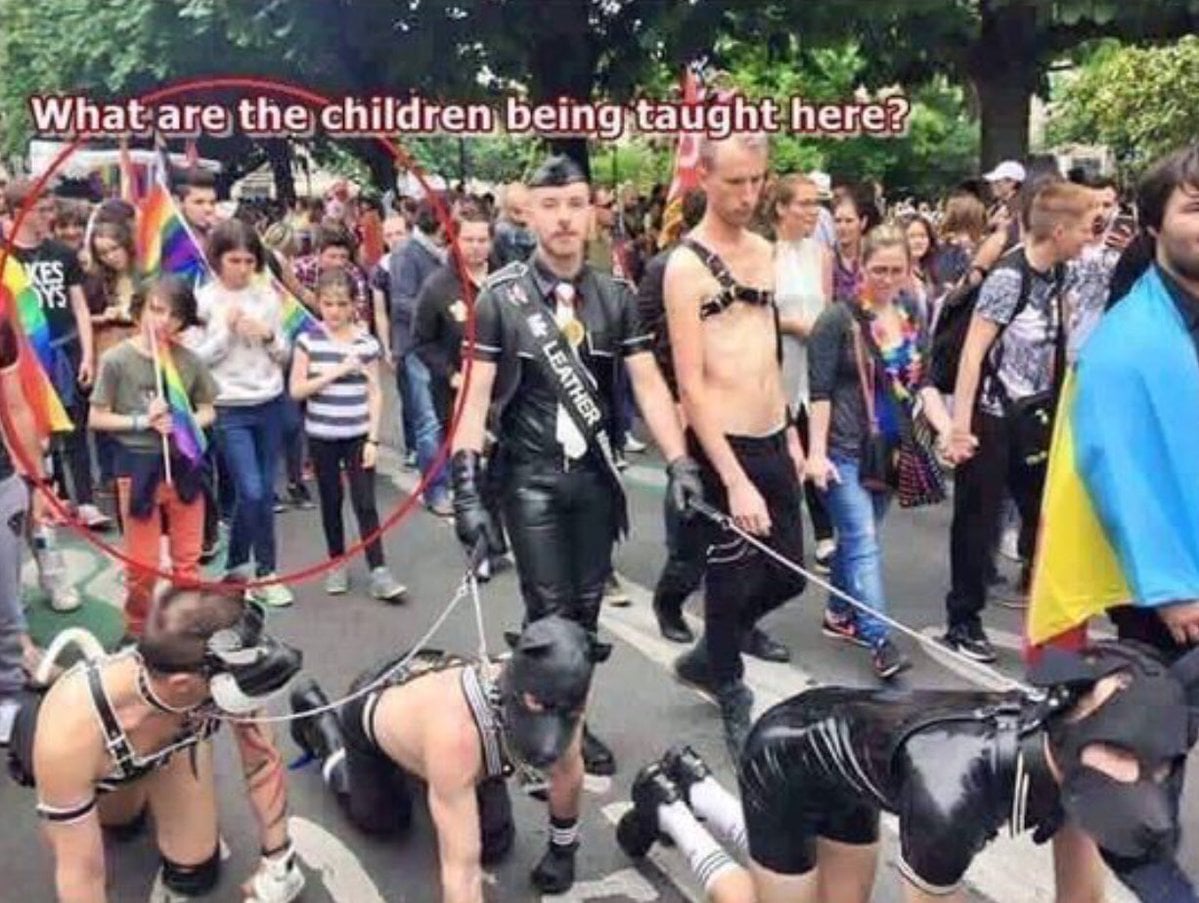 Children are dummer when they leave school than when they start school.