President Donald Trump has achieved more concrete progress for blacks, gays, and Jews than any other American president.

That claim is sure to be disputed, if not mocked, by those for whom grievance and identity politics are a profession or a psychological crutch.

Yet it remains true — and was thrown into sharp relief this week, as the Jussie Smollett case turned from one of the most horrific attacks in recent memory to the worst hate crime hoax in history.

There are two reasons the media, Hollywood, and the Democratic political elite believed Smollett’s claims.

First, he belongs to several victim categories: black, gay, and even Jewish (albeit via his father), according to the Jewish Telegraphic Agency.

Second,he appealed to the left’s shared contempt for America in the Trump era: he claimed, for example, that the fact people doubted his story “says a lot about the place that we are in our country right now.”

Blacks: Under Trump, black unemployment is at its lowest level in history. Trump pushed for, and signed into law, sweeping prison reforms backed by leaders of the African-American community. He pardoned the late boxer Jack Johnson, whom Barack Obama neglected. He also elevated a new generation of black conservatives in public life.

Jews: Trump recognized Jerusalem as Israel’s capital and moved the U.S. embassy there. He deported a Nazi who had lingered in the U.S. under Obama. He directed the FBI to solve the mystery of bomb threat hoaxes haunting the community. He is the first president with close Jewish relatives — his daughter, son-in-law, and grandchildren.

Gays: Trump championed gay voices within the GOP since his campaign, when he backed Peter Thiel at the Republican National Convention. Trump appointed U.S. ambassador to Germany Richard Grenell, one of the highest-ranking gay officials. His administration has launched a global campaign to decriminalize homosexuality. 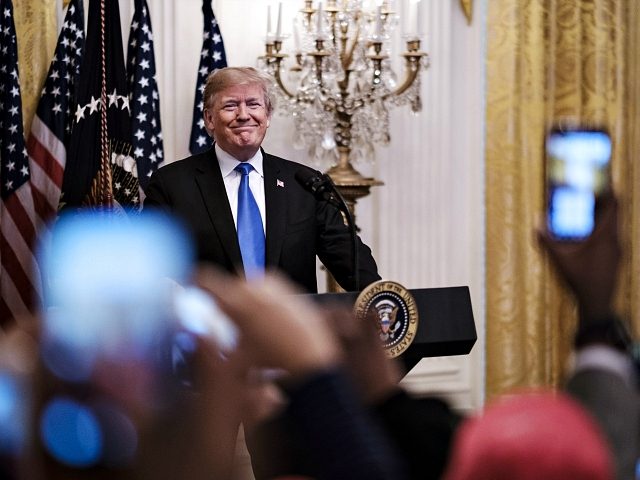 President Trump is expanding his base. Which is something the GOP has been moaning about the need to do for years and Donald Trump accomplishes it because he wants to solve problems, not milk them in perpetuity.

Great day with some of my favorite people at the White House! 🇺🇸

Expanding his base Ping :)

Strict definition Conservatives won’t like some of that, but the fact of the matter is that there just aren’t enough of yinz guys around to win elections anymore.

Trump has to reach out with populism to peel away some votes that normally lean Democrat.

President Trump is trying to expand his base, but they are not complying. Look at the congressional elections.

These groups continued to vote Democrat, even though they have improved materially and positionally under Trump. They do not care about that, being a victim and having that axe to grind trumps whatever they might have in improved life or freedom.

For them, it is better to reign in Hell than to serve in Heaven.

I’ll be impressed when these voting blocs actually get off the Democratic plantation and start voting the other way. But I’m not holding my breath.

I agree, and I've been angry at the forces that have caused this to happen (hello, GOPe) I also believe that despite this outreach by DJT, these folks will revert back to a solid vote for the Ds.

I am close enough to pick up a black talk radio station. You would think black unemployment is at a record high if you listen to what is being said. The lock the Rats have on the blacks seems unbreakable.

he needs to convert to mohammedumism and start transitioning. If that doesn't keep him out of jail, nothing will.

Voter fraud contributed significantly to this and it will be brought out soon. There have been intimations about it but the true extent has not been reported.

The whole reason the press and the left have been such fervent believers in the case in the first place is that there is such a dearth of these cases. They think, “Finally, here is an example of the Right’s bigotry”.

...something the GOP has been moaning about the need to do for years and Donald Trump accomplishes it because he wants to solve problems, not milk them in perpetuity.