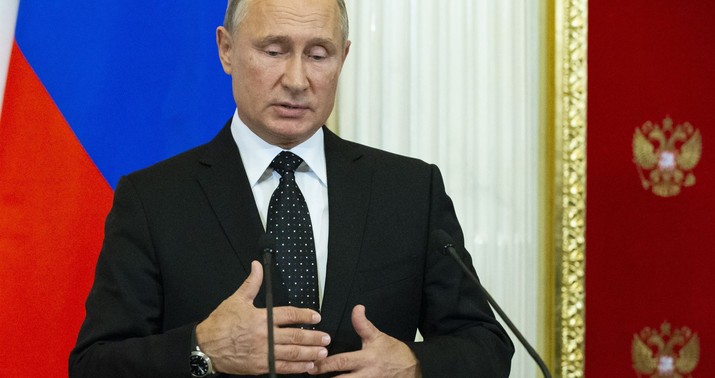 One doesn’t often see a climbdown from Moscow, especially not from strongman Vladimir Putin, and even more so this fast. Yesterday, Russia’s defense spokesman spoke ominously of “the right to take appropriate measures against hostile actions by Israel” after Syrian air defense forces shot down a Russian surveillance plane. Now however, Putin has danced away from the threat, calling the downing the result of “tragic chance events”:

Russian President Vladimir Putin on Tuesday described the downing of a Russian plane in Syria as the result of “tragic chance events,” appearing to dial back a rare flare-up in tensions with Israel.

Fifteen Russian service personnel were killed late Monday after Syrian air defenses hit their reconnaissance plane. Russia’s Defense Ministry initially claimed that the crash was indirectly the fault of Israel, saying that the Israeli military had not given adequate warning to the Russian aircraft and that Israeli pilots used the plane as cover while they attacked Syrian targets.

But Putin, speaking in Moscow on Tuesday, played down claims of Israeli culpability. “It looks most likely in this case that it was a chain of tragic chance events, because an Israeli aircraft did not shoot down our aircraft. But, without any doubt, we need to seriously get to the bottom of what happened,” he said.

That’s … some serious whiplash there. What happened? It’s tough to believe that a Russian officer would have gone rogue with such a threat, though, not in a strongman government like Putin’s. The threat to Israel was not even veiled, but made explicit by Maj. Gen. Igor Konashenkov. That heightened tensions in the regions by several degrees of torque and threatened to bust things out even wider than it already has been.

Russia’s defense minister, Sergei K. Shoigu, in remarks released Tuesday afternoon just as Mr. Putin was trying to calm anger at Israeli actions, said Israel had deliberately used the Russian surveillance plane as cover for its own warplanes “on the assumption that Syria’s air defenses would not be operating in that area.”

Russia, Mr. Shoigu told senior military officials, had informed Israel that “we are not going to leave such actions, such steps, unanswered,” the news agency Interfax reported.

So what happened? The Washington Post notes that Putin has a close relationship with Israeli PM Benjamin Netanyahu, who might have picked up a phone yesterday to protest that statement. If he did, however, Bibi might have reminded Putin that he has an even closer relationship with Donald Trump. Any retaliation against Israel, especially for a shootdown committed by Putin’s Syrian allies, would likely result in an immediate response from the US, which would pull us into a confrontation with Bashar al-Assad and likely Iran as well.

On top of that, the gripe was nonsensical anyway. If Israel used the flight to mask its attacks on weapons transfers between Iran and Hezbollah, Syrian air defenses and Russia air operations should be coordinated well enough to distinguish between a slow-flying surveillance plane and Israel’s attack forces. Even without an IFF system, the flight profiles are much different, as the BBC pointed out yesterday. Beyond that point, the real problem isn’t Israel — it’s Iran, which is using Syria as a staging point for a war against Israel. If Russia doesn’t want to get stuck in the middle of that, they can tell Iran to get the hell out.

We’ll see if this comes up again … and perhaps we’ll see if Gen. Konashenkov and Shoigu show up in their public roles any time soon.

The plane was shot down by the Syrians with a missile that the Russians made and Putin gave Assad.

I like how Trump underplayed his response, and allowed Putin to come to this conclusion on his own. A strong Trump comment may have made Putin freeze on his more hostile position.

Condemning Israel is cheap and easy, but a real military conflict is another matter. As the article suggests, Trump is on Israel’s side, and also Israel obviously punches way above its weight class. The Assad regime would be an early casualty of any real conflict, I suspect, and that would not serve Russia’s interests, to say the least. It’s better to play nice.

was Hillary or Bill on the plane?

It’s possible that Putin’s response will be towards Syria, and the target: Damascus. Psalm 17.

Yep, Trump has proven himself a master of human psychology, no small asset for a leader engaging in tense dilapomcy with characters like Putin and Kim

He realized this incident was not worth the escalation he was threatening - no oligarchs were harmed.

Maybe russia should get their asses OUT of syria

The plane was shot down by the Syrians with a missile that the Russians made and Putin gave Assad.]


Friendly fire occurs in situations when decision-makers don’t have all day to figure out what to do, and are typically exhausted from overwork. During the invasion of Iraq in 2003, despite the lack of either Iraqi Air Force activity or ballistic missiles, Patriot missiles shot down two friendly aircraft.
https://medium.com/war-is-boring/that-time-an-air-force-f-16-and-an-army-missile-battery-fought-each-other-bb89d7d03b7d

We may not have seen anything yet either. He may be about ready to lower the boom on all the deep state folks who stuck their head up in this political whack-a-mole project.

Multi-Billionaires like Mr. Putin and his Oligarchs are feel’in the squeeze on the value of the Ruble, and liquidity of their wealth...
See today’s Presidential EO and State Department action:

Secretary of State Mike Pompeo has authorized the addition of 33 alleged Russian spies, defense and intelligence officials to the US sanctions list. The blacklisting took place following an executive order from President Trump authorizing Steven Mnuchin, in consultation with Pompeo, to employ all powers granted to the President “by IEEPA and certain CATSAA sections” for implementation of certain sanctions with respect to Russia.

A White House official said the new measures were aimed at “imposing costs on Russia in response to its malign activities.”

I suppose he survived :)

That’s how I read it at first too.

The term “hoist on his own petard” comes to mind.