A House panel Tuesday formally requested Hillary Clinton to testify about the private server and email account she used while serving as secretary of state.

Rep. Trey Gowdy, chairman of the Select Committee on Benghazi, sent a request to Clinton's personal attorney, David E. Kendall, requesting that Clinton appear before the committee no later than May 1 for a transcribed interview about the server and email.

The request comes after Kendall told Gowdy that the server had been wiped clean and that it would be impossible to recover the 30,000 emails Clinton deleted last year.

Gowdy, in his request to Kendall, also asked Clinton to "reconsider" her refusal to turn over the server to a neutral third party, which he called "highly unusual, if not unprecedented."

Clinton said she only deleted personal emails and turned over every work-related message to the State Department, which is reviewing the data to filter out classified information.

"Because of the Secretary's unique arrangement with herself as it relates to public records during and after her tenure as Secretary of State." Gowdy wrote, "this Committee is left with no alternative but to request Secretary Clinton appear before this Committee for a transcribed interview to better understand decisions the Secretary made relevant to the creation, maintenance, retention, and ultimately deletion of public records."

What is Tampering with Evidence?

A person commits the crime of tampering with evidence when he or she knowingly:

alters, conceals, falsifies, or destroys
any record, document, or tangible object
with the intent to interfere with an investigation, possible investigation, or other proceeding by the federal government.
(18 U.S.C. § 1519.)

This crime includes making false entries in records or doctoring documents, such as by “cooking the books” of a business to hide illegal activity or avoid taxes or other required payments.

Tampering with evidence also includes destroying or altering documents or things “in contemplation of” an investigation or other proceeding that may occur in the future.
How is Tampering with Evidence Punished?

The U.S. government takes tampering with evidence very seriously. A person who is convicted of the crime under federal law may face a prison sentence of not more than 20 years, a fine, or both. (18 U.S.C. § 1519.)

If you know the technical and legal maneuvers that you cite, please get hold of Gowdy and share your expertise.

Nothing. She’s a Clinton. This is all bread and circuses. Nothing will ever happen because there is no real opposition with the exception of a few people. For the most part, Republicans are Democrats and nothing will ever be done to stop their corruption.

Just go ahead and do some intel and find out exactly WHEN her announcement to run is and then precede the announcement with a Congressional Summons and hour before that.

Take off the gloves and let our candidates make the hay that may.

She is NOT looking like presidential-candidate material as this “problem” goes on, and that seems to be the plan.

“Testify” and “subpoena” are words banned by Hillary! because they are sexist.”She’s toast” should be appearing on the list shortly.

HOT DAMN! I read the entire letter. This has got to have even the smartest woman in the world a little concerned. This time, after 20 years, a Clinton just might “go down” for an “indiscretion”.

Methinks the head banging incident was the buying of time, no doubt time spent scrubbing the the server and asking all correspondents to scrub their copies of her mail.

It is perverse, but our best hope will be that some Snowden-type hacked her communications and is keeping his or her powder dry until Hillary commits to something, under oath. So, watch Hillary’s minions work to delay any testimony.

Gowdy should be drafting the subpoena request right now. We all know what her response to this invitation will be. 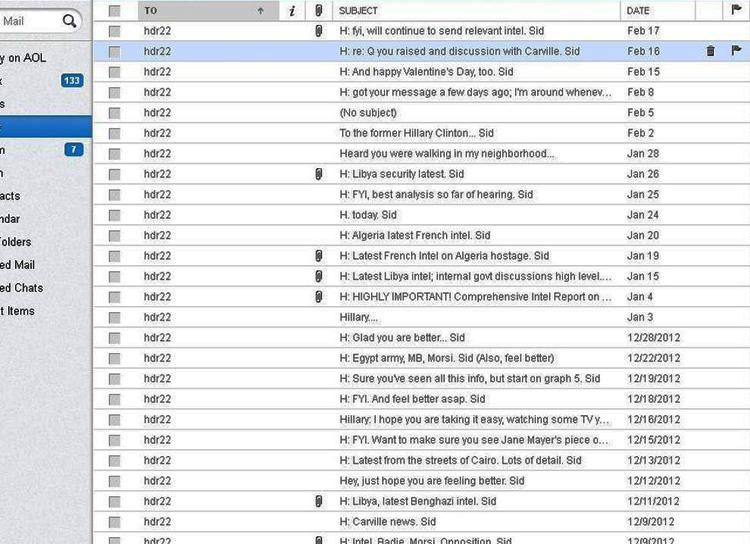 33 posted on 03/31/2015 9:23:37 AM PDT by COUNTrecount (Race Baiting...... "It's What's For Breakfast")
[ Post Reply | Private Reply | To 26 | View Replies]
To: sanjuanbob
I do machine motion programming. We lose hard drives, processors, and servers all the time. Servers also have automatic backups just in case. I am still recovering old DOS files on twenty year old computers to reinstall working files in factory machines because hardware and firmware is so old.

About six months ago I had to find a machine program for a Berkley Automation Machine (a BAM). I found a workable version of the files on an old desk top after it had been used by three employees after the one who had it. It also still existed on our AS400 even though our IT guy insisted it wasn't there or if was would be so corrupted we couldn't use it.

As for a Clinton recovery project......No thanks! I don't want to be a drive-by victim.

With a side of Jelloooooooooo!

How about the FBI?

I think you’ll find the real action takes place in lawsuits going on in the regular courts, such as for FOIA requests, etc. And this will provide the fodder for then over there.

38 posted on 03/31/2015 9:39:26 AM PDT by Suz in AZ
[ Post Reply | Private Reply | To 24 | View Replies]
To: COUNTrecount
Not later than May 1, why not tomorrow, she is going to ignore your request (requesting that Clinton appear) what you expect her to RSVP like it's a dinner party, like she needs time to select a pant suit, get herself primped and botoxed for the camera, what a farce I tell you, I have had enough of this political circus dog and pony show, it has been two years already, if it were me who destroyed government documents claiming they were mine to do with as I wish, I would be in jail eighteen months ago.

There is no justice applied to the Progressive Liberal Democrat Communists. (PERIOD)

Clinton loses summons in her server.