CHICAGO - Buying organic milk these days - or organic apples, eggs, or beef - no longer has to mean an extra trip to a Whole Foods supermarket or the local co-op.

Organic products now line the shelves at Safeway and Costco. And Wal-Mart - already the nation's largest organic-milk seller - says it wants to sell more organic food. Large companies including Kraft, General Mills, and Kellogg own sizable organic- and natural-food brands. Now, they are developing organic versions of their own products, too.

Still, while some organic-food fans welcome its broadening appeal and availability, others worry that the entry of corporate behemoths into the organic-food market will weaken standards or squeeze out small farmers.

Meanwhile, consumers scanning the aisles face a jumble of labels and claims - cage-free, natural, free-range, organic - with little to indicate how well those claims match reality.

"People knew that once the demand was there, that larger companies would be in there," says Sue McGovern, spokeswoman for Organic Valley, a farmer-owned dairy and meat cooperative. "How do we feel about Kraft and other folks coming into the industry? People are split. It's a difficult question."

The organic industry is still relatively tiny - 2.5 percent of all retail food sales in 2005 - but it's growing quickly. Last year, sales totaled nearly $14 billion, according to the Organic Trade Association - up 16 percent from the year before. Organic meat was particularly strong, up 55 percent in 2005. Dairy products were up 24 percent.

Such products command a premium price - often 20 or 30 percent more than conventional versions - and sorting out which ones are worth the extra cost can be tricky.

In February, a Consumer Reports article examined which organic foods offered the most benefit. With certain fruits and vegetables - including apples, peppers, cherries, peaches, and potatoes - the likelihood of pesticide residue is much higher, it concluded, so buying organic makes a big difference. Produce which showed little difference between organic and conventional kinds included asparagus, bananas, broccoli, and onions.

The United States Department of Agriculture (USDA) issued standards for organic products in 2000, although some critics question how strictly they're applied. But the market for organic food is anything but simple. Many organic producers never bother to go through the process of becoming certified, while other producers use labels such as "free-range" or "natural" that conjure up bucolic images but may mean very little.

"People use certain terms loosely, and consumers are fooled," says Joe DePippo, president of FreeBird, which produces antibiotic-free organic chicken raised on small family farms. "Consumers associate free-range with organic, and rightfully so, but there's some market for free-range that's not organic. And to just think that you can have chickens running free all over the field - it's just not practical."

Regina Beidler and her husband, Brent, who run a 145-acre dairy farm in Vermont, take the necessary steps so that their goods receive the organic label. A visit to the Beidler's farm found their 40-cow herd grazing contentedly in the rain on a hill overlooking the White River Valley. At about 4 p.m. every day, as well as at 4 a.m., the cows take turns at the milking stations in the cedar-shingled barn, where they munch on organic grain and hay.

"Integrity is something that ... we all realize is important to maintaining consumer confidence," says Ms. Beidler, who says some of their practices go beyond USDA requirements. "I always say there's an implicit partnership between farmers who produce organic and consumers who buy it."

But recent controversies have highlighted doubts about whether everyone lives up to that standard. A report released last month by the Cornucopia Institute, which supports family-scale farming, rated organic dairy producers on their practices. While it found that the majority followed good practices, the group was highly critical of two of the nation's largest producers: Horizon Organic, a subsidiary of Dean Foods, and Aurora Organic, which supplies private-label milk to many supermarkets. Both producers, the report said, buy much of their milk from large-scale feedlots where the cows have little or no access to pasture.

"The USDA listens to big players more closely than to consumers or small farmers," says Ronnie Cummins, director of the Organic Consumers Association in Finland, Minn. "With Wal-Mart and other folks jumping in, what will happen down the road is the small- and medium-size operators will be forced out of business."

In addition to his concern about divergent practices in organic poultry and milk production (the supply of organic milk can't keep up with demand at this point), Mr. Cummins worries about companies buying products like soybeans overseas.

Consumers buying soy milk or tofu, "have no clue that in the case of soy milk and tofu, it's actually coming from China, where organic standards are dubious and labor standards are abysmal," he says.

A widening array of options reflects the many concerns on shoppers' minds: pesticides, animal welfare, environmental issues, other health concerns.

Egg Innovations, which contracts with Amish farmers for its eggs and bills itself as the "Cage Free Company," offers four varieties of eggs: certified organic, Omega-3, vegetarian, and cage free.

The organic eggs are the most expensive and have the strictest standards: Chickens have access to the outdoors, and the company meets all USDA organic requirements. But none of the its chickens are fed hormones or antibiotics, and they all have a vegetarian diet. The different labels are designed largely to appeal to different types of consumers.

"Shoppers are evolving with what's important to them, and we try to evolve with them," says John Brunnquell, the company's founder and a third-generation family farmer.

Another effect of high demand and big players getting into the market is likely to be lower prices. Wal-Mart plans to sell organic products for about 10 percent more than its conventional counterparts.

And at last week's All Things Organic trade show in Chicago, Dakota Beef touted its frozen, organic ground-beef patties. Costco has just begun selling them as a pilot project in the Midwest. In the past five weeks, sales have increased more than 60 percent, says Matt Grove, a business development executive for Dakota Beef. The price: $16.98 for four pounds.

"That's a price point everyone can afford," Mr. Grove says.

• Melanie Stetson Freeman contributed to this report from Vermont.

The US Department of Agriculture issued standards for anyone using its "organic" label in 2000. These standards prohibit the use of most synthetic (and petroleum derived) pesticides and fertilizers, and all antibiotics, genetic engineering, irradiation, and sewage sludge in the production of fruits, vegetables, meat, and poultry. In order to be labeled organic, livestock must eat 100 percent organic feed that is free of animal byproducts or growth hormones. These animals also must have access to the outdoors (although the definition of "outdoor access" for chickens is ambiguous).

Even with these guidelines, labels for organic foods vary. They include:

Organic: 95 percent of the ingredients must be organically grown and the remaining 5 percent must come from non-organic ingredients that have been approved by the National Organics Standards Board.

Free-range or cage-free: No regulation or standard definition exists for most animals. The USDA regulates the use of the term "free-range" with poultry (not eggs), but chickens can have extremely limited access to the outdoors and still meet the criteria.

Natural: This label doesn't mean anything except on meat and poultry, where the USDA says the meat must not contain artificial flavoring, color, ingredients, chemical preservatives, or artificial ingredients. It can only be "minimally processed." No certification or verification process exists to hold companies accountable for using the term.

Rule #1: Only ever eat foods from your native planet.

Translation "Damn now we have to cost compete with Wal-Mart, how ever will Whole Foods and other upscale grocers be able to continue selling produce at elevated prices?"

Never eat anything bigger than your head. 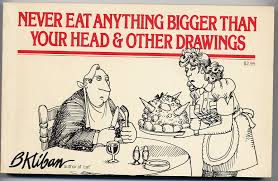 Organic is a huge scam. It was a big mistake for the USDA to wade into it.

Don't ever watch a farmer spread manure on his field.

Be a patriot! Grow a lot of your own vegetables! I do & they taste better than the ones in the stores, they're cheaper & I know what's been put on them - also I know that I didn't help Mexico in the process.

I don't live out in the country, I grow veggies in my flower beds & containers on my deck - takes a little effort, but I enjoy piddling with the plants when I come home from work.

Grow your own Victory Garden!

You have *got* to be kidding me.

In respectful disagreement, I prefer my food without pesticides.

I would love to!

However, I have a very small backyard.

Me too. You would be surprised how many tomatoes you can get off of a potted tomato plant on the deck! Also, zucchini, cucumbers & green beans, I grow on a trellis over my deck rails - I get gobs of them. A couple of pepper plants will produce lots in very little space. Right now, I'm growing leaf lettuce on the deck (until it gets too hot), I just pick the leaves off every night for a small salad & the next day, it's like the plants have doubled in size again!

It's really lots of fun.

I buy a lot of organic cereal, not because organic-ness is a concern for me, but because they don't contain High Fructose Corn Syrup (my own private bugbear). The popularity of organic food has, by extension, made it easierfor me to avoid HFCS.

Americans need to get back in the habit of eating seasonally, for the area you live in. I try to support local farmers (what's left of them) in the summer at the local farmer's market & always ask them if the produce is grown locally. When it's harvest time, I go & buy what they have a bumper crop of & freeze bunches of beans, etc. Makes good soup in the winter.

"...others worry that the entry of corporate behemoths into the organic-food market will weaken standards or squeeze out small farmers..."

Competition. Oh, the horror. There will always be a local market for small producers who offer a good product at competitive prices.

yeah, I trust Corporate America when it comes to Organic.

I used to eat whatever. Not anymore. I hate paying the cost of Organic Food at Whole Foods; but Big Food Companies/Producers are a joke.

And as a previous poster mentioned, why does everything from Mainstream producers have to have hi sugar content?

In respectful disagreement, I prefer my food without pesticides.

We have recently switched to organic milk due to the hormones. There have been discussions as to whether the estrogen in the milk is affecting boys behavior...in other words making them more emotional. I'm a woman and want my boy to be a boy.

Sometimes it seems that "organic" only means relaxed standards for insect parts.