An effort was made to release the controversial documentary "Winter Soldier" during John Kerry's failed 2004 presidential campaign, but industry insiders decided to hold the film back fearing a backlash against Kerry.

But with the election safely behind them, "Winter Soldier" -- a documentary which alleges atrocities by U.S. troops in Vietnam -- is set for re-release and is once again causing a stir.

The Village Voice reports that last year a movie executive balked at screening "Winter Soldier” during John Kerry’s run for president for fear that it would do him more harm than good.

But even though a filmmaker used footage from "Winter Soldier” to lionize Kerry in a biographical movie underwritten by Democrats, Cooper was concerned about its possible negative effect on Kerry’s campaign, New York’s Village Voice reports, and decided not to screen it.

Milestone Film and Video co-founders Dennis Doros and Amy Heller then picked up the film, which has been discredited by many vets.

But, said Heller, "because the right is well funded and very litigious, it became clear that the best way to release it was to have a separate corporation that would protect the assets of Milestone just in case the Swift Boat Veterans want to make trouble.”

Now Heller and Doros say they can take on riskier material and are set to screen the documentary in several cities.

And according to the Voice, they can thank "the fragility of the Kerry campaign” for landing them distribution rights.

Uh, yeah. That explains the trial lawyers being so heavily behind the Bush/Cheney campaign last year. [yawn]

Losers never quit losing.
All it's gonna take is protesters out front Calling on
Kerry to release his form 180.

The so called documentary and these people are all despicable!

OOOOPs, forget it, they're still protesting losing the election.......... 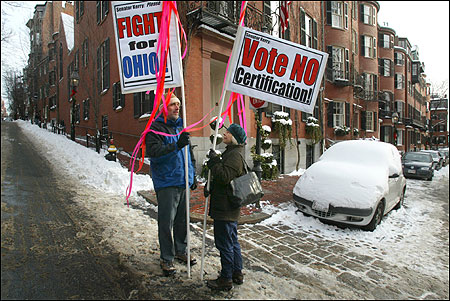 This needs your learned perspective.

But don't post any opinion contrary to the Red Queen's (heh heh). Since I did these playing-card-looking guys keep trying to cut my head off.

9 posted on 08/09/2005 7:31:08 PM PDT by NewRomeTacitus (The Qa' ran says moderates are apostates while the fanatics on Jihad are right. It's evil!)
[ Post Reply | Private Reply | To 1 | View Replies]
To: NewRomeTacitus
Spineless US Senate would rather protect Hanoi Kerry
than deal with the anti war crowd.

Anyone who thinks Hanoi Kerry isn't behind the anti war crowd needs to get a clue.

It's time to support our troops and ignore the jelly fish in the US Senate!

He is there illegally!

For those who "forgot" what Hanoi Kerry
did in the past read on and learn the truth.

Hanoi Kerry was still a USNR officer while he:
gave false hearsay testimony to Congress
negotiated with the enemy
helped the US lose a war
abetted in the deaths of millions
created a hostile environment for all servicemen

Why is Kerry still in the US Senate?
This is in violation of
U.S. Constitution Amendment 14 Sec 3
http://www.law.cornell.edu/constitution/constitution.amendmentxiv.html

And the FBI has proof of his treason.

May 1970
Kerry and Julia traveled to Paris, France and met with Madame Nguyen Thi Binh, the Foreign Minister of the Provisional Revolutionary Government of Vietnam (PRG), the political wing of the Vietcong, and other Viet Cong and Communist Vietnamese representatives to the Paris peace talks, a trip he now calls a "fact-finding" mission.

a) A person charged with absence without leave or missing movement in time of war,
or with any offense punishable by death,
may be tried at any time without limitation.

Full details on these url's!

There is a backup site
if the 1st url is unavailable.

I don't think these leftists understand just how poorly their Vietnam-era atrocity propaganda is going to come across today, when even the most rabid haters of our military have to pretend to "support the troops."

She has already started eliminating the competition for 08.

Vietnam -- is set for re-release and is once again causing a stir.

The Village Voice reports that last year a movie executive balked at screening "Winter Soldier” during John Kerry’s run for president for fear that it would do him more harm than good.
See gang even the ratmedia knows that too many lies will backfire.

Great memory pic from the past. By any chance do you have the pic of the idiot woman from Ohio reacting on the Capitol steps when certification of the vote was announced?

Did anyone see Gretta van Botox last night, shamelessly promote the poor idiot woman who is protesting the war down at W's ranch?

He should have said something about it during the campaign; he might have won.