According to an analysis by scientists at the FDA, the experimental pill cut the risk of hospitalization or death from COVID-19 by about 30%, compared to a placebo, and the pill showed no benefit for people with antibodies against COVID-19 from prior infection.

The updated analysis showed 48 hospitalizations or deaths among study participants who were randomly assigned to take the antiviral drug, compared to 68 among those who took a placebo.

Those results come from the full set of 1,433 patients who were randomized in the clinical trial, which just became available last week.

Initial results from the first 775 patients enrolled in the clinical trial, which were issued in a company news release in October, had said the drug cut the risk of hospitalization or death for patients at high risk of severe disease by about 50%.

Merck has been producing millions of doses of molnupiravir, which is the first antiviral pill to treat COVID-19 infections. The United Kingdom’s drug regulator authorized use of the medication in early November. The company said it expected to distribute the medication globally by the end of 2021.

Last month, two Indian drug companies halted late-stage clinical trials of a generic version of molnupiravir after the studies failed to find any benefit to patients with moderate COVID-19. Trials in patients with milder symptoms are still ongoing.

The medication is designed to be given as four pills taken every 12 hours for 5 days. It’s most effective when taken within the first few days of new symptoms, something that requires convenient and affordable testing.

The new results seem to put molnupiravir far below the effectiveness of existing treatments.

The infused monoclonal antibody cocktail REGEN-COV, which the FDA has already authorized for emergency use, is about 85% effective at preventing hospitalization or death in patients who are at risk for severe COVID-19 outcomes, and it appears to be just as effective in people who already have antibodies against COVID-19, which is why it is being given to both vaccinated and unvaccinated patients, the FDA said.

In early November, Pfizer said its experimental antiviral pill Paxlovid cut the risk of hospitalization or death by 89%.

The agency has asked the advisory committee to weigh in on the right patient population for the drug: Should pregnant women get it? Could the drug harm a developing fetus?

And what about mutations caused by the medication? Could they increase the potential for more variants? The agency concluded the risk of this happening was low.

In animal studies, the drug impacted bone formation. For this reason, the agency has agreed with the drug company that molnupiravir should not be given to anyone under the age of 18.

Aside from these concerns, the FDA says there were no major safety issues among people who took part in the clinical trial, though they acknowledge that number is small.

My unvaccinated kin got COVID a few weeks back. They had no sense of taste and had black semicircles under their eyes. They went in for monoclonal therapy. Six days later they were testing clean for COVID, no sign of the disease (multiple tests) and they returned to work. Their tastes is coming back slowly now.

Do any of these people know what they’re doing or bother to read/research all the data out there about therapeutics?

My daughter had the same symptoms. But she was double vaxxed

Someone should study Ivermectin but they don’t want to hear about something they cannot make money from.

Prayers for your daughter, I hope she’s back and healthy soon!

So the original claim of, what 90%, was false. I’m shocked. Yep, really surprised. 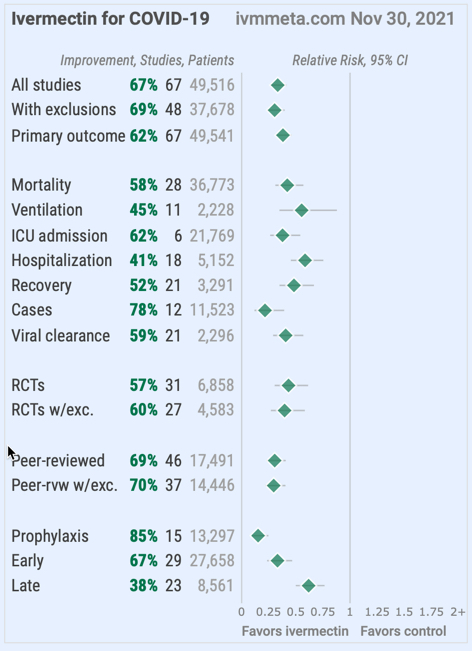 Yet another drug attempting to reconstitute Ivermectin, and make it wildly more expensive.

Ivermectin is just too cheap, too effective, and too safe.

Just put a candy coating on Ivermectin and rename it, done.
Easy peasy.

Paxlovid used the same design strategy as Crixivan (indinavir), except using SARS CoV 2 instead of HIV.

Hopium addicts is what they are.

Merck was the original company that brought Eqvalan ivermectin) injection, then subsequently, Eqvalan paste to market , and changed the nature of equine veterinary practice overnight. Instead of doctors tube deworming herds of horses every 4-6 weeks, owners dewormed their horses with paste. Virtually same cost to owners, but veterinarians’ gross income fell into the gutter. And we have never recovered.

Merck just gutted their customer base and went direct to owners.

Would you really want to buy a product where the seller hopes it works?

That HAD to happen, doncha know.