Legendary Punk Rocker John Lydon, who goes by “Johnny Rotten” and fronts the iconic band “The Sex Pistols” has made it clear he’s voting for Trump.

Rotten told BBC’s NewsDay he is “definitely” voting for Trump last month. Lydon is born in London but because a U.S. Citizen in 2013.

Explaining his reason, the lead singer said “He’s an individual thinker, I’ll give him that for a start. He’s not the most lovable fellow on God’s earth, but I cannot see the opposition as offering me anything by way of a solution.”

“Yes, of course I’m voting for Trump,” Lydon said with clarity later in the interview “It’s bad person or not. I don’t want a politician running this world anymore.”

The Sex Pistols are famous for their 1970s punk anthems “Anarchy in the U.K.” and “God Save the Queen.”

In 2018, Lydon was photographed wearing a shirt with the Trump slogan “Make America Great Again.” 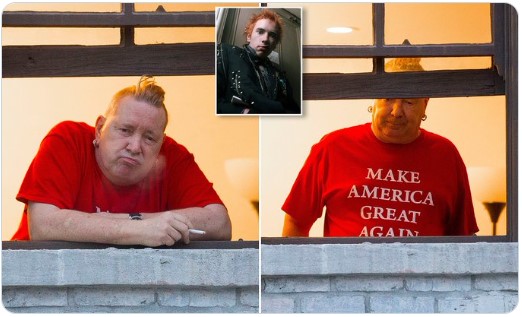 Its a vote but Johnny R s as crazy as they come.

Not really a surprise. He’s an odd person, but he does understand the world better than most people.

Some of the ramones and the misfits were fairly right wing too.

Great news! I loved that band.

‘Ya’ know you’re in trouble if you’ve lost the punk rockers.

28 Sept: Newsweek: John Lydon’s Trump Support Leaves Sex Pistols Fans Feeling Rotten
By Emma Nolan
Johnny Rotten aka John Lydon has been open about his support for Trump and Brexit for some time now—but fans of the Sex Pistols and the former punk legend are still disappointed...
A tweet showing the “God Save the Queen” singer wearing a pro-Donald Trump ‘Make America Great Again’ T-shirt has gone viral on Twitter this week, with one former fan decrying his idol’s political views...

...in a 2017 NPR interview, Lydon called Trump “absolutely magnificent.”
“I think he’s absolutely magnificent. He’s a total cat amongst the pigeons,” he said at the time. “It’s got everybody now involving themselves in a political way. And I’ve been struggling for years to get people to wake up and do that.”...

In the same year, during a Good Morning Britain appearance, Lydon said Trump was a “complicated fellow” who had been “smeared” by the “left-wing media.”
“One journalist once said to me, is he the political Sex Pistol? In a way.
“What I dislike is the left-wing media in America are trying to smear the bloke as a racist and that’s completely not true.
“There are many, many problems with him as a human being but he’s not that and there just might be a chance something good will come out of that situation because he terrifies politicians.”
“This is a joy to behold for me. Dare I say, [he could be] a possible friend.”...
https://www.newsweek.com/john-lydon-trump-support-sex-pistols-fans-make-america-great-again-t-shirt-johnny-rotten-1534584

the outraged fans should be wondering how they and their other rock heroes could possibly support crony career politician Biden, and not the MAGNIFICENT MAVERICK, who has exposed the Deep State...and will continue to do so, when re-relected.

He called for the demise of the Royal Family even before they became Royal leftist creeps.

I can’t believe he’s not following Taylor Swift in voting.

This was news a couple weeks back IIRC.

I have known some Punks in my life, and a lot of them are more conservative than the average person would think.

I showed my wife his picture. Back in the very early 80s She was more into the Boston punk scene than I.

She said she thought he was dead.

I barely knew who he was. But every vote counts.

Punk philosophy is generally against authority, and the Democrats have openly become in favor of massive state control. The only reason many young people support the Democrats is because they don’t try to control sex and drugs. They accept economic control in exchange for self-indulgence of vices.

I would agree with that and add that many young people vote based on emotion, and they perceive the Democrat party as more "caring."

This actually makes me giddy. I’ve been involved in the punk rock/new wave/alt scene since my oldest brother (who I worship, practically) brought home the Pistols and Ramones’ albums when he was in college. So I’ve been into punk/new wave since its inception (’77).

It’s no wonder that Johnny Rotten (as well as a few of the Ramones, Mo Tucker from the Velvets, etc.) are right wing. They are free thinkers. They refuse to follow the herd (because the herd gets eaten.)

17 posted on 10/11/2020 6:38:41 AM PDT by Mermaid Girl
[ Post Reply | Private Reply | To 1 | View Replies]
To: Repealthe17thAmendment
The only reason many young people support the Democrats is because they don’t try to control sex and drugs.

At the same time they are teaching college "womyn" to blow their rape whistles any time a man says "you look pretty in that outfit".

Liberals approve when you want to smoke marijuana for "medical" purposes. But if you want to take a common anti-malaria drug because it appears to work against the Chinese plague, you have an obligation to the State to die with your body unpolluted by HCQ.

Of the two major parties, the Democrats are by far the more authoritarian. And leftists plug their ears when told that.

Someone knows his PiL! Dig it!

Also, dig the freep name, too. My original freeper name was a RepoMan referene too.

Welcome... to the world.