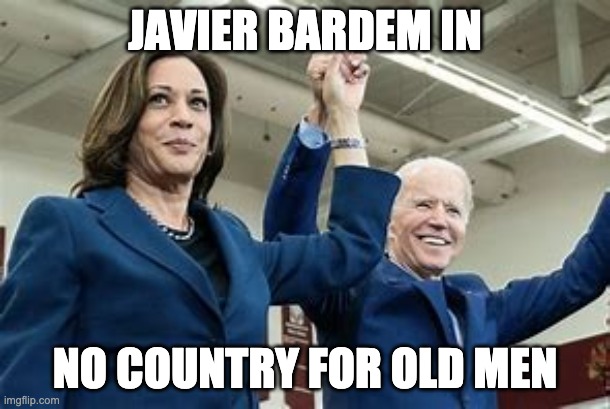 I was just about to post that...keep it handy for the pearl clutchers beyond the trees.

1,403 posted on 07/22/2020 4:11:24 PM PDT by little jeremiah (Courage is not simply one of the virtues, but the form of every virtue at the testing point.)
[ Post Reply | Private Reply | To 1399 | View Replies]
To: TruthWillWin
Might be a good idea for people to get lists of good twitter people who may get banned and alternative places for them. Or alternative accounts, just found this:

When Trump touted mazks a day or two ago (When? Time flies!) I feel icky for a few minutes but then the light came on (it has a dimmer switch...) and I realized he’s doing this for a very specific reason (or two). I’ll find out. Voila! He removed mazks from the category of Demshevik weapon and second, ushers in yet another reason for voting in persoan, AND photo ID!

File this in the category of Things that make you go Hmmmmmmm. I got an email today from GEDMatch. It is an ancestry site. If you get DNA results from a place like Ancestry.com, you can upload them to this site, and they have a database of relatives they can match you with. Here is what they said in the email:

“On the morning of July 19, GEDmatch experienced a security breach orchestrated through a sophisticated attack on one of our servers via an existing user account. We became aware of the situation a short time later and immediately took the site down. As a result of this breach, all user permissions were reset, making all profiles visible to all users. This was the case for approximately 3 hours. During this time, users who did not opt-in for law enforcement matching were available for law enforcement matching, and, conversely, all law enforcement profiles were made visible to GEDmatch users.”

So, someone was able to try to try to match people for 3 hours. Who and why is unknown. Sounds very derpish.

Isn’t he a genius!

You all might like this thread by Carlos Osweda and this other one by Brian Cates already posted:

Great unrolled thread by Carlos Osweda, click link to read the two links in the thread.

Congratulations on your reelection, @realDonaldTrump.

The Democrats PREEMPTIVELY oppose the restoration of the rule of law.

Their platform is “Violent Crime Unchecked.”

All it took was ONE video that was CLEARLY not what it seemed, and the Democrats utterly destroyed themselves.

Look at THIS idiot:

“After numerous reports and lawsuits in Portland regarding un-badged and un-uniformed federal officers arresting, beating, and detaining people in unmarked vehicles, the Trump administration’s response is that they’re going to do it even more, and in more cities.”

“My dad volunteered and served in World War II to fight fascism, like most of my uncles, so we would not have an American president brutalizing and kidnapping Americans for exercising their constitutional rights and trying to make America a better place.”

Democrats were SET UP.

Literally NOTHING they say is happening is actually happening.

They were fed disinformation, and since nobody fact checks anymore, they’re now committed to fighting against the rule of law.

“Vote for us! We’ll smash your heads!”

I hope everyone understands what an amazing turn of events this is.

We now have one of our two major political parties running on forcible unemployment and lawlessness.

And that doesn’t even cover all the OTHER deranged positions.

This is a bridge too far for the vast majority of Democratic voters.

But the Democrats are offering exactly that.

LOOK HOW EASY IT WAS TO LEAD THEM INTO THE TIGER PIT.
Everybody’s seen the footage of leftists cracking open heads.

ONE extremely odd video of uniformed feds gently picking up a man and putting him in an unmarked van, and the Democrats say, “THAT’S IT! ABOLISH THE RULE OF LAW!”

“OUR people can put you in the hospital, and we’re making it ILLEGAL for anyone to stop them.”

As I keep saying, the Civil War was RATIONAL.

This is not only not rational, the Democrats are engaged in self-extermination.

We have only a few antecedents in history.

The Armed Islamic Group (GIA) in Algeria was one such movement.

All it did was kill.

Its motto was “No agreement, no truce, no dialogue.”

YOU CAN’T WIN WITH THIS MINDSET.

The deeply unpopular Algerian government secretly helped the GIA in what became known as the “Algerian Strategy,” and when the people finally supported the government out of the need to SURVIVE, the government easily destroyed the GIA.

You know the main reason for the destruction of the GIA?

IT’S MEMBERS DESERTED BECAUSE OF THE INSANITY OF THE TACTICS.

When all you offer is death and misery, YOU LOSE.

But Democrats no longer understand this.

We all know that Trump is a student of The Art of War, by Sun Tzu.

But let’s look at The Thirty-six Stratagems, by Wang Jingze, which Trump also studies.

Mask one’s real goals from those in authority who lack vision by not alerting them to one’s movements or any part of one’s plan.

Wait at leisure while the enemy labors. Encourage the enemy to expend their energy in futile quests while one conserves their strength. When the enemy is exhausted and confused, attack with energy and purpose.

Create something from nothing. A plain lie. Make somebody believe there was something when there is in fact nothing or vice versa.

Deceive the enemy with an obvious approach that will take a very long time, while ambushing them with another approach.

Delay entering the field of battle until all other parties become exhausted by fighting amongst each other. Go in at full strength and finish them off.

Do something unusual, strange, and unexpected to arouse the enemy’s suspicion and disrupt their thinking.

Tying silk blossoms on a dead tree gives the illusion that the tree is healthy. Using artifice and disguise, make something worthless appear valuable and vice versa.

In important matters, one should use several stratagems applied simultaneously after another as in a chain of stratagems. Keep different plans operating in an overall scheme; if any one strategy fails, apply the next strategy.

People couldn’t even explain why they hated Trump.

But they can certainly understand why they can’t vote for the Democrats.

Trump made sure that people could SEE THE PERSONAL COST of continuing to support Democrats.
And all Trump had to do was to goad the Democrats into dropping the mask.

We were “warned” all 2016 that Trump wouldn’t accept losing to Hillary and it has been just the opposite for almost 4 years with Hillary’s whining.

1,410 posted on 07/22/2020 4:27:44 PM PDT by nclaurel
[ Post Reply | Private Reply | To 1167 | View Replies]
To: Miss Didi
I forgot where I read it, perhaps on FR? a post where someone noticed FBI Director Chris Wray's body language at not wanting to come forward and speak at the President's Operation Legend announcement.

I went back and watched - HILARIOUS. That poster was very observant. Wray's entire demeanor was like a kid at detention, especially as he dawdles up to the podium and shambles back. And says the absolute minimum.

SO WORTH WATCHING. I literally LOL

You back a group of people that sees you as the enemy?

And yes I think Trump kadoodled him

Hilarious to watch the chat on YouTube for Operation Legend livestream. Everyone knows Wray's a sleeper.😎#WrayGoAway pic.twitter.com/mSvybrWfAC— OpenEyes (@104America) July 22, 2020 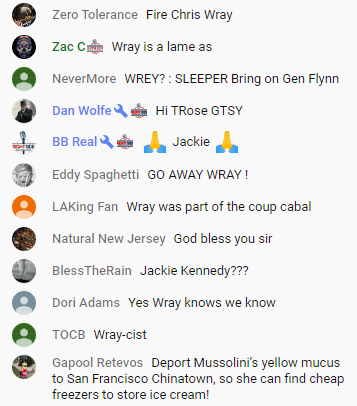 Our man in Caracas (BDA) says Russian Intelligence believes 3G is about to go. Chyna is preparing their people.

“Troops are being positioned as I write this and when the dam collapses the treaty between the U.S. And Taiwan will be announced.”

I thought I’d read where Praying Medic was one of those booted from Twitter, but he’s still there. Here’s his explanation of why:

“A careful reading of the announcement makes it clear that Twitter (at least for now) does not intend to suspend accounts merely for tweeting about Qanon. They plan to suspend accounts that have violated their terms of service by creating multiple accounts, engaging in targeted harassment, or evading prior suspensions. As long as an account does not engage in one of these behaviors, they should not be suspended just for posting about Q. (At least that’s Twitter’s official policy.) The other actions in the bullet list describe how Twitter plans to limit the spread of Q-related information on the platform.”

So for now, those who stay within the lines will still have access to Twitter, apparently. Their site, their rules. But they’ve given proof positive that they are a publisher not a neutral platform.

The operator of the dam was forced to admit last Saturday that it has “deformed slightly,” with peripheral parts of its 1.5-mile span buckling.

Every single illegal immigrant vote detected by the database is going to be tossed.
*****************
Ballots are not marked, so as to track an individuals vote.

Absentee ballots by illegals (signed by the voter) can be discarded prior to tabulation, but all others?

How do you determine if a mail in ballot was submitted by an illegal?

States run the elections, and large precincts such as in Miami/Dade are run by the Dems.

I’m not that kind of damn engineer, but I’m thinking once it starts deforming and buckling, with even more rain coming, then it’s really just a matter of time. It’s not like it’s going to “get better”.