The image of a black hole has a bright ring of emission surrounding a "shadow" cast by the black hole. This ring is composed of a stack of increasingly sharp subrings that correspond to the number of orbits that photons took around the black hole before reaching the observer. Credit: George Wong (UIUC) and Michael Johnson (CfA)

Last April, the Event Horizon Telescope (EHT) sparked international excitement when it unveiled the first image of a black hole. Today, a team of researchers have published new calculations that predict a striking and intricate substructure within black hole images from extreme gravitational light bending.

"The image of a black hole actually contains a nested series of rings," explains Michael Johnson of the Center for Astrophysics, Harvard and Smithsonian (CfA). "Each successive ring has about the same diameter but becomes increasingly sharper because its light orbited the black hole more times before reaching the observer. With the current EHT image, we've caught just a glimpse of the full complexity that should emerge in the image of any black hole."

Because black holes trap any photons that cross their event horizon, they cast a shadow on their bright surrounding emission from hot infalling gas. A "photon ring" encircles this shadow, produced from light that is concentrated by the strong gravity near the black hole. This photon ring carries the fingerprint of the black hole—its size and shape encode the mass and rotation or "spin" of the black hole. With the EHT images, black hole researchers have a new tool to study these extraordinary objects.

"This is an extremely exciting time to be thinking about the physics of black holes," says Daniel Kapec from the Institute for Advanced Study. "Einstein's theory of general relativity makes a number of striking predictions for the types of observations that are finally coming within reach, and I think we can look forward to lots of advances in the coming years. As a theorist, I find the rapid convergence between theory and experiment especially rewarding, and I hope we can continue to isolate and observe more universal predictions of general relativity as these experiments become more sensitive."

Black holes cast a shadow on the image of bright surrounding material because their strong gravitational field can bend and trap light. The shadow is bounded by a bright ring of light, corresponding to photons that pass near the black hole before escaping. The ring is actually a stack of increasingly sharp subrings, and the n-th subring corresponds to photons that orbited the black hole n/2 times before reaching the observer. This animation shows how a black hole image is formed from these subrings and the trajectories of photons that create the image. Credit: Center for Astrophysics, Harvard & Smithsonian

"Bringing together experts from different fields enabled us to really connect a theoretical understanding of the photon ring to what is possible with observation," notes George Wong, a physics graduate student at the University of Illinois at Urbana-Champaign. Wong developed software to produce simulated black hole images at higher resolutions than had previously been computed and to decompose these into the predicted series of sub-images. "What started as classic pencil-and-paper calculations prompted us to push our simulations to new limits." 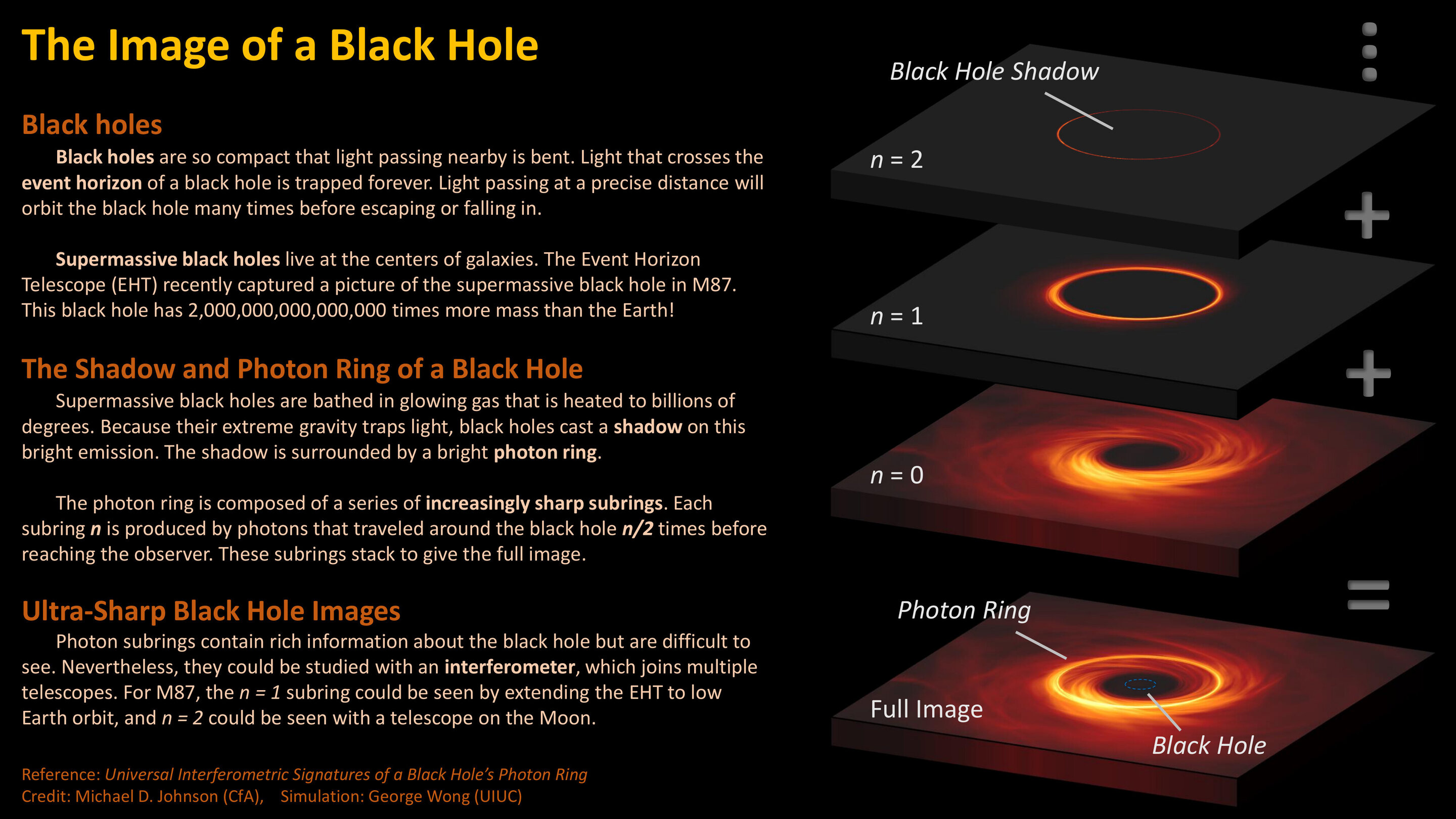 The researchers also found that the black hole's image substructure creates new possibilities to observe black holes. "What really surprised us was that while the nested subrings are almost imperceptible to the naked eye on images—even perfect images—they are strong and clear signals for arrays of telescopes called interferometers," says Johnson. "While capturing black hole images normally requires many distributed telescopes, the subrings are perfect to study using only two telescopes that are very far apart. Adding one space telescope to the EHT would be enough."

"Black hole physics has always been a beautiful subject with deep theoretical implications, but now it has also become an experimental science," says Alex Lupsasca from the Harvard Society of Fellows. "As a theorist, I am delighted to finally glean real data about these objects that we've been abstractly thinking about for so long."

The results were published in Science Advances.

Is it somehow gaining momentum? Is it making "mid-course corrections?"

what a ridiculous scam this black hole stuff has become

You're thinking of all those fly-bys by NASA space probes, whereby they "stole" momentum from, e.g., Jupiter to fly on (at a higher speed) to, e.g., Saturn and beyond?

Those were hyperbolic trajectories (with respect to Jupiter).

Really? It's not hard to imagine the smaller body approaching at a vector with a low enough velocity that gravitational forces would capture it. (You could be correct but it's not intuitive.)

If so, does that imply that everything orbiting around the sun came from it?

Real Man of Science, black hole skeptic, we salute you !

Any person who is not skeptical of the absurdist and ever-shifting concept of black holes is a religious cultist.

They still can’t even DEFINE the term a hundred years after its invention.

No fixed definition = not science

I believe in Black Holes. (Took a course in Special Relativity in college.)

What I don’t believe is that one swallowed Malaysian Airlines Flight 370...

IAC, it's good to read about some new science now and then...

Many Journalists saw a massive Black Hole up close during the Obama Presidency.

The White House Press Corp even gave it some tongue action.

Many Journalists saw a massive Black Hole up close.....NAWW. I don’ believe Big Mike is....

Very interesting questions, not that I have an answer, lol. But I saw something a while back about Near Earth Objects which escape Earth’s orbit because they never really settle into a stable Earth orbit to begin with. I got the impression they can “orbit” for hundreds of years before conditions are just right and they escape. Perhaps something similar can occur with photons in orbit around a black hole?

18 posted on 03/24/2020 12:41:32 PM PDT by LibWhacker
[ Post Reply | Private Reply | To 6 | View Replies]
To: LibWhacker
Very interesting questions, not that I have an answer, lol. But I saw something a while back about Near Earth Objects which escape Earth’s orbit because they never really settle into a stable Earth orbit to begin with. I got the impression they can “orbit” for hundreds of years before conditions are just right and they escape. Perhaps something similar can occur with photons in orbit around a black hole?

You're probably thinking of quasi-satellites, bodies in horseshoe orbits or tadpole orbits and the like.

Bear in mind that those are examples involving three-body systems: The Sun, the Earth orbiting the Sun, and a much smaller, third body (asteroid, etc.) interacting with the Earth while, essentially, in orbit around the Sun. That would not be applicable to a scenario involving just a single primary (the Black Hole) and photons.

Again: I'm not denying the validity or at least the plausibility of this article - just saying that when attempting to apply principles of Classical Celestial Mechanics to the described scenario (which the article suggests we should do), I fail.

I can only suspect that "weird science" (i.e., Quantum Mechanical effects and/or Relativistic effects) are involved.

19 posted on 03/24/2020 11:32:58 PM PDT by alexander_busek (Extraordinary claims require extraordinary evidence.)
[ Post Reply | Private Reply | To 18 | View Replies]
To: alexander_busek
Correct, that's right, they're called quasi-satellites. Here's the article I was referring to: -> http://theconversation.com/earths-got-a-new-moon-heres-what-to-expect-132554. Scanning through it confirms just how bad my memory is; nothing about the article suggests these orbits persist for hundreds of years. That's why it's best for me to say as little about something I casually read, even if recently. *Sigh*... I knew this. When will I ever learn? :-(
20 posted on 03/25/2020 12:36:53 AM PDT by LibWhacker
[ Post Reply | Private Reply | To 19 | View Replies]