Radio, IR and optical observations show evolution of plumes and their impact on belts and zones

Storm clouds rooted deep in Jupiter's atmosphere are affecting the planet's white zones and colorful belts, creating disturbances in their flow and even changing their color.

Thanks to coordinated observations of the planet in January 2017 by six ground-based optical and radio telescopes and NASA's Hubble Space Telescope, a University of California, Berkeley, astronomer and her colleagues have been able to track the effects of these storms -- visible as bright plumes above the planet's ammonia ice clouds -- on the belts in which they appear.

The observations will ultimately help planetary scientists understand the complex atmospheric dynamics on Jupiter, which, with its Great Red Spot and colorful, layer cake-like bands, make it one of the most beautiful and changeable of the giant gas planets in the solar system.

One such plume was noticed by amateur astronomer Phil Miles in Australia a few days before the first observations by the Atacama Large Millimeter/Submillimeter Array (ALMA) in Chile, and photos captured a week later by Hubble showed that the plume had spawned a second plume and left a downstream disturbance in the band of clouds, the South Equatorial Belt. The rising plumes then interacted with Jupiter's powerful winds, which stretched the clouds east and west from their point of origin.

Three months earlier, four bright spots were seen slightly north of the North Equatorial Belt. Though those plumes had disappeared by 2017, the belt had since widened northward, and its northern edge had changed color from white to orangish brown.

"If these plumes are vigorous and continue to have convective events, they may disturb one of these entire bands over time, though it may take a few months," said study leader Imke de Pater, a UC Berkeley professor emerita of astronomy. "With these observations, we see one plume in progress and the aftereffects of the others."

The analysis of the plumes supports the theory that they originate about 80 kilometers below the cloud tops at a place dominated by clouds of liquid water. A paper describing the results has been accepted for publication in the Astronomical Journal and is now online.

Jupiter's atmosphere is mostly hydrogen and helium, with trace amounts of methane, ammonia, hydrogen sulfide and water. The top-most cloud layer is made up of ammonia ice and comprises the brown belts and white zones we see with the naked eye. Below this outer cloud layer sits a layer of solid ammonium hydrosulfide particles. Deeper still, at around 80 kilometers below the upper cloud deck, is a layer of liquid water droplets.

The storm clouds de Pater and her team studied appear in the belts and zones as bright plumes and behave much like the cumulonimbus clouds that precede thunderstorms on Earth. Jupiter's storm clouds, like those on Earth, are often accompanied by lightning.

Optical observations cannot see below the ammonia clouds, however, so de Pater and her team have been probing deeper with radio telescopes, including ALMA and also the Very Large Array (VLA) in New Mexico, which is operated by the National Science Foundation-funded National Radio Astronomy Observatory.

ALMA array's first observations of Jupiter were between Jan. 3 and 5 of 2017, a few days after one of these bright plumes was seen by amateur astronomers in the planet's South Equatorial Belt. A week later, Hubble, the VLA, the Gemini, Keck and Subaru observatories in Hawaii and the Very Large Telescope (VLT) in Chile captured images in the visible, radio and mid-infrared ranges.

De Pater combined the ALMA radio observations with the other data, focused specifically on the newly brewed storm as it punched through the upper deck clouds of ammonia ice.

The data showed that these storm clouds reached as high as the tropopause -- the coldest part of the atmosphere -- where they spread out much like the anvil-shaped cumulonimbus clouds that generate lightning and thunder on Earth.

"Our ALMA observations are the first to show that high concentrations of ammonia gas are brought up during an energetic eruption," de Pater said.

The observations are consistent with one theory, called moist convection, about how these plumes form. According to this theory, convection brings a mix of ammonia and water vapor high enough -- about 80 kilometers below the cloud tops -- for the water to condense into liquid droplets. The condensing water releases heat that expands the cloud and buoys it quickly upward through other cloud layers, ultimately breaking through the ammonia ice clouds at the top of the atmosphere.

The plume's momentum carries the supercooled ammonia cloud above the existing ammonia-ice clouds until the ammonia freezes, creating a bright, white plume that stands out against the colorful bands encircling Jupiter.

"We were really lucky with these data, because they were taken just a few days after amateur astronomers found a bright plume in the South Equatorial Belt," said de Pater. "With ALMA, we observed the whole planet and saw that plume, and since ALMA probes below the cloud layers, we could actually see what was going on below the ammonia clouds."

Hubble took images a week after ALMA and captured two separate bright spots, which suggests that the plumes originate from the same source and are carried eastward by the high altitude jet stream, leading to the large disturbances seen in the belt.

Coincidentally, three months before, bright plumes had been observed north of the Northern Equatorial Belt. The January 2017 observations showed that that belt had expanded in width, and the band where the plumes had first been seen turned from white to orange. De Pater suspects that the northward expansion of the North Equatorial Belt is a result of gas from the ammonia-depleted plumes falling back into the deeper atmosphere.

De Pater's colleague and co-author Robert Sault of the University of Melbourne in Australia used special computer software to analyze the ALMA data to obtain radio maps of the surface that are comparable to visible-light photos taken by Hubble.

"Jupiter's rotation once every 10 hours usually blurs radio maps, because these maps take many hours to observe," Sault said. "In addition, because of Jupiter's large size, we had to 'scan' the planet, so we could make a large mosaic in the end. We developed a technique to construct a full map of the planet."

Among the co-authors of the paper with de Pater and Sault are graduate students Chris Moeckel and Charles Goullaud and research astronomers Michael Wong and David DeBoer, all of UC Berkeley, and Bryan Butler of the National Radio Astronomy Observatory. Each was involved in obtaining and analyzing the Hubble, Gemini, ALMA and VLA data.

The VLT data were contributed by Leigh Fletcher and Padraig Donnelly of the University of Leicester in the United Kingdom, while Glenn Orton and James Sinclair of the Jet Propulsion Laboratory in California and Yasuma Kasaba of Tokyo University in Japan supplied the SUBARU data. Gordon Bjoraker of the NASA Goddard Space Flight Center in Maryland and Máté Ádámkovics of Clemson University in South Carolina analyzed the Keck data.

The work was supported by a NASA Planetary Astronomy award (NNX14AJ43G) and a Solar System Observations award (80NSSC18K1001).

Disclaimer: AAAS and EurekAlert! are not responsible for the accuracy of news releases posted to EurekAlert! by contributing institutions or for the use of any information through the EurekAlert system. 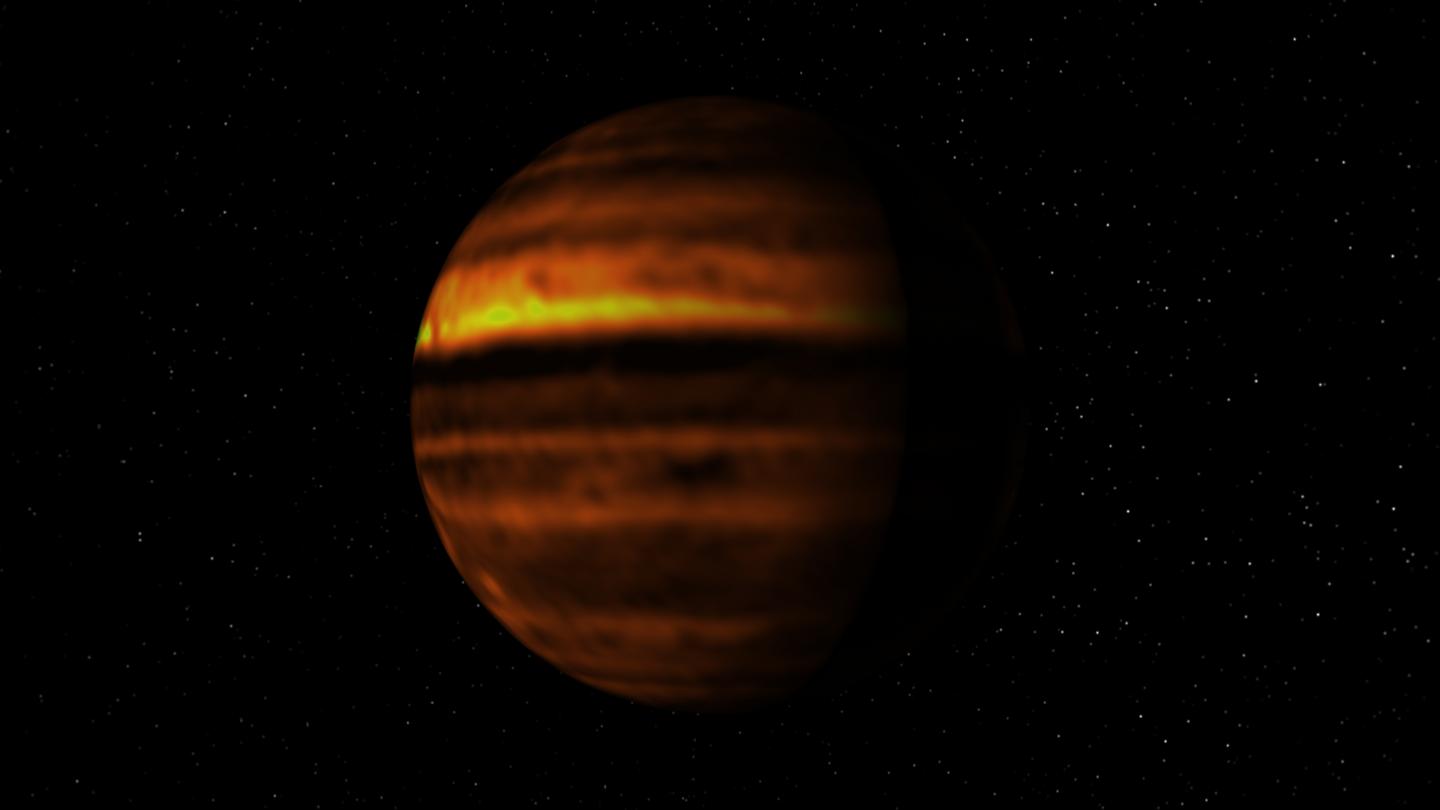 Jupiter’s belts are not as colorful in reality as they are in the plethora of false color images we all enjoy.

Proof of Galactic warming , all tin foil hats shall be regulated

Jupiter should buy some carbon credits to offset this problem.

Its those damned Jovian SUVs. They mess up every planet’s climate. BAN JOVIAN SUVs.

Quick, someone tell congress to regulate it.

Our lodge has Jupiter as its planet for the Winter Solstice walk in December. The planets have markers set out along the lake shore in town at their relative distances to each of the other planets. So this is timely info to share this year.

Most of the time Jupiter’s belts appear in grayscale through a typical backyard telescope. One year in January I was observing with a Celestron C-9.25 Schmidt-Cassegrain telescope in my backyard in Soldotna, AK just before a big storm was coming in from the Gulf of Alaska. It is said that the best “seeing” condition are just before big storms arrive. That night I saw the colors of all of Jupiter’s rings and it was absolutely beautiful. That image is forever seared into my memory.

I blame the Black Monoliths.

If you squint at the picture you can make them out.