New reading of Mesha Stele could have far-reaching consequences for biblical history
Phys.org ^ | May 2, 2019 | by Taylor & Francis, academic publisher 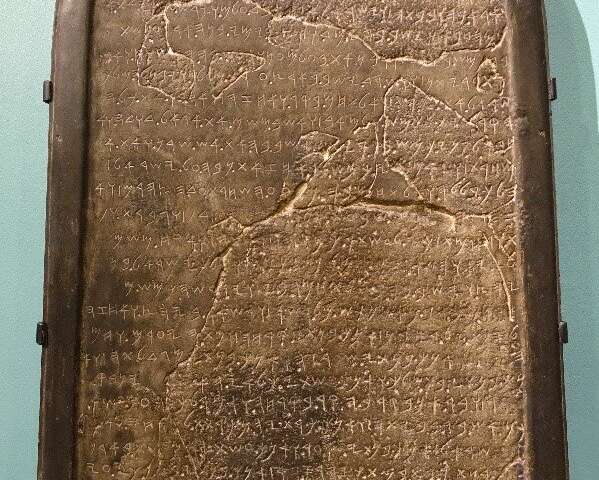 The biblical King Balak may have been a historical figure, according to a new reading of the Mesha Stele, an inscribed stone dating from the second half of the 9th century BCE.

A name in Line 31 of the stele, previously thought to read 'House of David', could instead read 'Balak', a king of Moab mentioned in the biblical story of Balaam (Numbers 22-24), say archaeologist Prof. Israel Finkelstein and historians and biblical scholars Prof. Nadav Na'aman and Prof. Thomas Römer, in an article published in Tel Aviv: The Journal of the Institute of Archaeology of Tel Aviv University.

The Mesha Stele was found in the 19th century in the ruins of the biblical town of Dibon in Moab (present day Jordan), and is now in the Louvre. The stone's inscription tells the story of the territorial expansion and construction endeavours of King Mesha of Moab, who is mentioned in the Bible. The stele was cracked in the 19th century and parts of it are missing, but portions of the missing parts are preserved in a reverse copy of the inscription, known as a 'squeeze', made before the stele cracked.

The authors studied new high-resolution photographs of the squeeze, and of the stele itself. These new images made it clear that there are three consonants in the name of the monarch mentioned in Line 31, and that the first is the Hebrew letter beth (a 'b' sound).

While the other letters are eroded, the most likely candidate for the monarch's name is 'Balak', the authors say. The seat of the king referred to in Line 31 was at Horonaim, a place mentioned four times in the Bible in relation to the Moabite territory south of the Arnon River. "Thus, Balak may be a historical personality like Balaam, who, before the discovery of the Deir Alla inscription, was considered to be an 'invented' figure," they suggest.

"The new photographs of the Mesha Stele and the squeeze indicate that the reading, 'House of David' - accepted by many scholars for more than two decades—is no longer an option," the authors conclude. "With due caution we suggest the name of the Moabite king Balak, who, according to the Balaam story of Numbers 22-24, sought to bring a divine curse on the people of Israel.

"This story was written down later than the time of the Moabite king referred to in the Mesha Stele. Yet, to give a sense of authenticity to his story, its author must have integrated into the plot certain elements borrowed from the ancient reality, including two personal names: Balaam and Balak."

When you read it a second time, it turns out that Jonah and the whale become really good friends.

Is ‘Balaam’ a Goa’uld system lord?

This inscribed stone tablet, dating from 9BC is, like, FOR REALZ a record of history. But, the oral and written (scrolls) collection of the Bible are “stories, myths and fables”.

And, like, who chiseled this tablet? Some guy who hammered his own opinion into the stone, so...

I automatically skeptical of anyone who uses the BCE designation. It’s not my intent to hijack the thread.

First win for the Cavaliers in a while. LOL

Goliath was just trying to found the body positive movement but he was struck down by a boy using his thin privilege.

Interesting that you should say that.

I am familiar with the work of Israel Finkelstein. He is thorough going, but he is a controversial figure in Biblical archeology. He is a Bible skeptic and at every opportunity he takes a contrarian view. Here, you can see he is delighted to be able to even plausibly offer a reading that diminishes the traditional reading of the stele and it’s inscription: House of David.

LOL! I wrote a test computer program at work once, where the User had to enter their name.

I would more likely believe an engraved stone from 900 BC before I’d believe stories told over the same time. Ever hear of the game “telephone?”

>>>I automatically skeptical of anyone who uses the BCE

The original article qas written in The Journal of the Institute of Archaeology of Tel Aviv University. There is a good chance these researchers still consider the world to be in the BC period.

Call me a lazy historian, but if I had to carve everything I wanted to write down into a granite stele, I wouldn’t be adding in fantasies or insignificant names or dynasties.

That logic leads me to believe a lot more of the ancient writings on stone that relate to stories in the Bible and vice versa. They are citations that prove out the information.