Early science results from NASA’s Juno mission to Jupiter portray the largest planet in our solar system as a complex, gigantic, turbulent world, with Earth-sized polar cyclones, plunging storm systems that travel deep into the heart of the gas giant, and a mammoth, lumpy magnetic field that may indicate it was generated closer to the planet’s surface than previously thought.

“We are excited to share these early discoveries, which help us better understand what makes Jupiter so fascinating,” said Diane Brown, Juno program executive at NASA Headquarters in Washington. "It was a long trip to get to Jupiter, but these first results already demonstrate it was well worth the journey.”

Juno launched on Aug. 5, 2011, entering Jupiter’s orbit on July 4, 2016. The findings from the first data-collection pass, which flew within about 2,600 miles (4,200 kilometers) of Jupiter's swirling cloud tops on Aug. 27, are being published this week in two papers in the journal Science, as well as 44 papers in Geophysical Research Letters.

“We knew, going in, that Jupiter would throw us some curves,” said Scott Bolton, Juno principal investigator from the Southwest Research Institute in San Antonio. “But now that we are here we are finding that Jupiter can throw the heat, as well as knuckleballs and sliders. There is so much going on here that we didn’t expect that we have had to take a step back and begin to rethink of this as a whole new Jupiter.”

Among the findings that challenge assumptions are those provided by Juno’s imager, JunoCam. The images show both of Jupiter's poles are covered in Earth-sized swirling storms that are densely clustered and rubbing together.

“We're puzzled as to how they could be formed, how stable the configuration is, and why Jupiter’s north pole doesn't look like the south pole,” said Bolton. “We're questioning whether this is a dynamic system, and are we seeing just one stage, and over the next year, we're going to watch it disappear, or is this a stable configuration and these storms are circulating around one another?”

Another surprise comes from Juno’s Microwave Radiometer (MWR), which samples the thermal microwave radiation from Jupiter’s atmosphere, from the top of the ammonia clouds to deep within its atmosphere. The MWR data indicates that Jupiter’s iconic belts and zones are mysterious, with the belt near the equator penetrating all the way down, while the belts and zones at other latitudes seem to evolve to other structures. The data suggest the ammonia is quite variable and continues to increase as far down as we can see with MWR, which is a few hundred miles or kilometers.

“Juno is giving us a view of the magnetic field close to Jupiter that we’ve never had before,” said Jack Connerney, Juno deputy principal investigator and the lead for the mission’s magnetic field investigation at NASA's Goddard Space Flight Center in Greenbelt, Maryland. “Already we see that the magnetic field looks lumpy: it is stronger in some places and weaker in others. This uneven distribution suggests that the field might be generated by dynamo action closer to the surface, above the layer of metallic hydrogen. Every flyby we execute gets us closer to determining where and how Jupiter’s dynamo works.”

Juno also is designed to study the polar magnetosphere and the origin of Jupiter's powerful auroras—its northern and southern lights. These auroral emissions are caused by particles that pick up energy, slamming into atmospheric molecules. Juno’s initial observations indicate that the process seems to work differently at Jupiter than at Earth.

Juno is in a polar orbit around Jupiter, and the majority of each orbit is spent well away from the gas giant. But, once every 53 days, its trajectory approaches Jupiter from above its north pole, where it begins a two-hour transit (from pole to pole) flying north to south with its eight science instruments collecting data and its JunoCam public outreach camera snapping pictures. The download of six megabytes of data collected during the transit can take 1.5 days.

“Every 53 days, we go screaming by Jupiter, get doused by a fire hose of Jovian science, and there is always something new,” said Bolton. “On our next flyby on July 11, we will fly directly over one of the most iconic features in the entire solar system -- one that every school kid knows -- Jupiter’s Great Red Spot. If anybody is going to get to the bottom of what is going on below those mammoth swirling crimson cloud tops, it’s Juno and her cloud-piercing science instruments.” 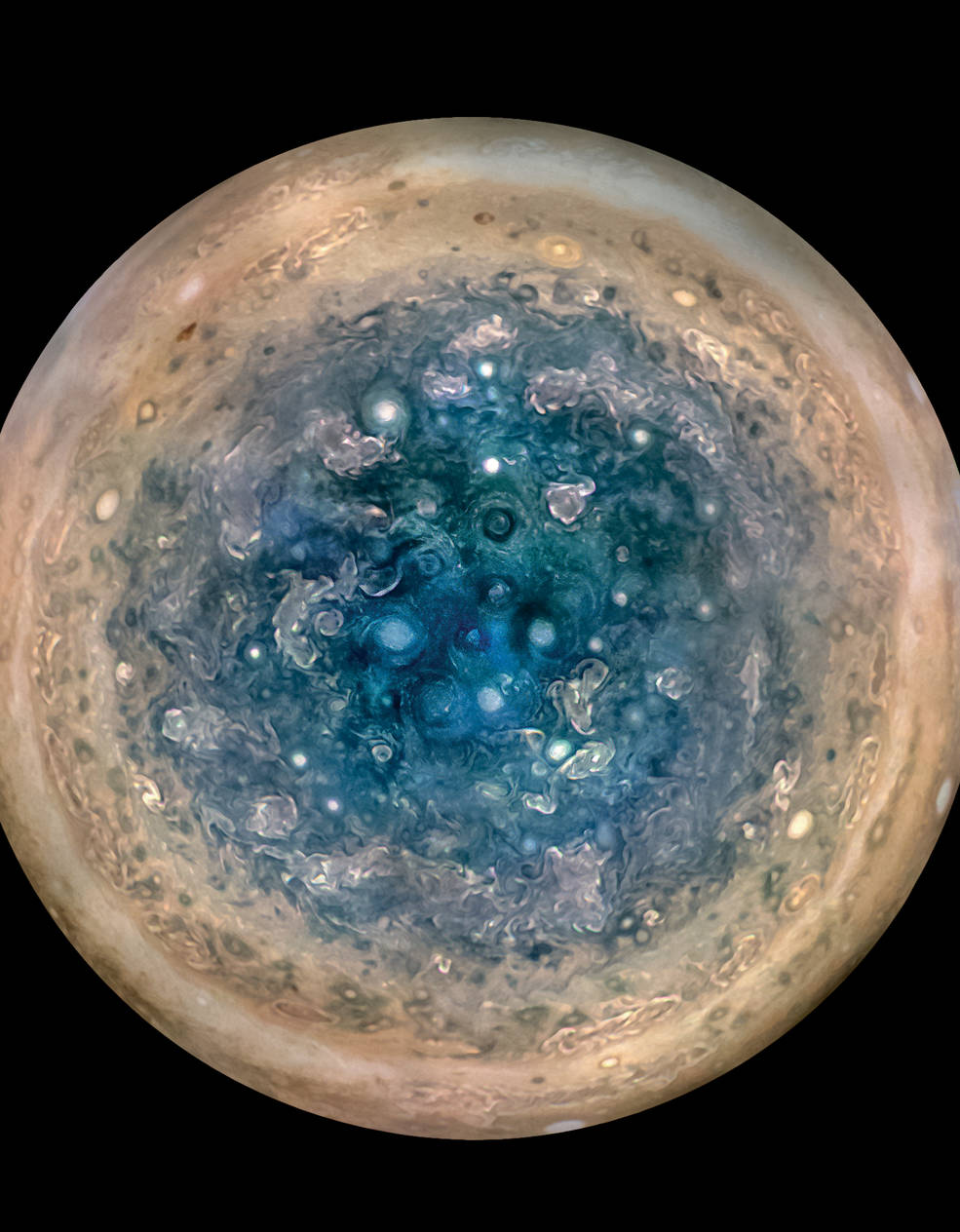 This image shows Jupiter’s south pole, as seen by NASA’s Juno spacecraft from an altitude of 32,000 miles (52,000 kilometers). The oval features are cyclones, up to 600 miles (1,000 kilometers) in diameter. Multiple images taken with the JunoCam instrument on three separate orbits were combined to show all areas in daylight, enhanced color, and stereographic projection.
Credits: NASA/JPL-Caltech/SwRI/MSSS/Betsy Asher Hall/Gervasio Robles
1 posted on 05/25/2017 5:04:06 PM PDT by BenLurkin
[ Post Reply | Private Reply | View Replies]
To: BenLurkin

Space produces so many mysteries and such beauties.

4 posted on 05/25/2017 6:08:27 PM PDT by buckalfa (Slip sliding away towards senility.)
[ Post Reply | Private Reply | To 1 | View Replies]
To: BenLurkin
Jupiter’s iconic belts and zones are mysterious, with the belt near the equator penetrating all the way down, while the belts and zones at other latitudes seem to evolve to other structures

what does evolve to other structures mean, please?

My best guess: It means they don’t know what’s really going on.

6 posted on 05/25/2017 6:34:04 PM PDT by BenLurkin (The above is not a statement of fact. It is either satire or opinion. Or both.)
[ Post Reply | Private Reply | To 5 | View Replies]
To: one of His mysterious ways; 1FreeAmerican; AFreeBird; A. Patriot; AndrewC; antonia; aristotleman; ..
The gravity driven astronomers and cosmologists are again surprised by what reality presents to them. Electric Universe cosmologists are not, having predicted many of the things that are so surprising to the orthodox scientists. This time it is what is being learned about Jupiter and its eletromagnetic fields. Electric Universe PING! 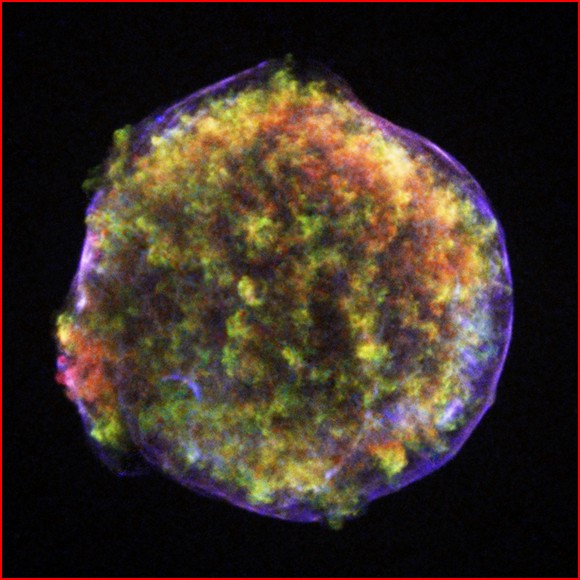 If you want on or off the Electric Universe Ping List, Freepmail me.

Gustav Holst - The Planets - Jupiter, the Bringer of Jollity
https://www.youtube.com/watch?v=Nz0b4STz1lo

Jupiter has insufficient mass to ignite. It would have to be 85 times more massive to be a red dwarf. The smallest red dwarf is about 0.075 solar masses.
Jupiter is not even big enough to be a brown dwarf, which may have some short lived fusion reactions burning deuterium.

Hold it a sec, bucko! You can't just walk away.

What does that last image represent?

It's an image taken of Tycho’s Star, the remnants of a 1572 Supernova seen by Tycho Brahe back in 1572. This is a false color image constructed by data obtained in ~2005 by the Chandra 20" X-ray telescope on the Advanced X-ray Astrophysics Facility Satellite.

"In this image, Tycho’s supernova has two shock waves (the high-energy filaments, shown in blue), and the cloud of debris (lower-energy x-rays, shown in green and red) is not lagging behind. Measurements indicate that the blue x-rays are “non-thermal,” which means that they’re not coming from “hot gas.” (The million-degree temperature is not a direct measurement but is calculated according to how hot a gas must be to emit x-rays with the observed energy.)

"Conventional astronomers think that they can adjust the theory to make the outside shock wave accelerate the nuclei of atoms to cosmic ray energies. Then if they see the blue filaments and the close-following debris as the results of this acceleration, looking and seeing may again harmonize.

"But what else could it be? Plasma theory explains supernovas as stars that develop instabilities in the galactic Birkeland currents driving them. In the same way that an unstable double layer (DL) on the Sun explodes into a flare, a DL that encompasses an entire star explodes into a supernova. The energy is released in the acceleration of ions, primarily along the axis of the current, and in non-thermal radiation, especially radio and x-ray emission." read more at: — Tycho's Star in Theory and Practice — Thunderbolts.info

Jupiter is not even big enough to be a brown dwarf, which may have some short lived fusion reactions burning deuterium.

Both Jupiter and Saturn emit more energy than each of them receive from the Sun. Ergo, some source of energy is driving them beyond Fusion energy the gravity driven fusion.

The energy output is due to the gas giant contracting due to gravity. But there is no fusion taking place. Look up “brown dwarf”. It’s the same reason why brown dwarves (with insufficient mass to start the proton-proton reaction) have “surface” temperatures” in the neighborhood of 1200 K. Eventually the contraction will end due to equilibrium and the body will cool due to thermal radiation.

13 posted on 05/26/2017 5:06:35 AM PDT by Fred Hayek (The Democratic Party is now the operational arm of the CPUSA)
[ Post Reply | Private Reply | To 12 | View Replies]
To: Fred Hayek
The energy output is due to the gas giant contracting due to gravity. But there is no fusion taking place. Look up “brown dwarf”. It’s the same reason why brown dwarves (with insufficient mass to start the proton-proton reaction) have “surface” temperatures” in the neighborhood of 1200 K. Eventually the contraction will end due to equilibrium and the body will cool due to thermal radiation.

Keep dancing. That explanation doesn't hold water. Even on the sun it doesn't work. Solar "surface" chromosphere temperature averages 5800K—it is even cooler as seen below when measure through sunspots—but the upper atmosphere of the Sun is measured at from 1,000,000 K to 2,000,000 K. This is not the result of gravity with convection somehow bringing the core heat outward. One can not get a higher temperature in a larger volume with convection, it can only get cooler. It is certainly not going to get hotter by three orders of magnitude. Something other than gravity and convection is at work driving this phenomenon.

But what about Uranus?

15 posted on 05/26/2017 2:47:15 PM PDT by notdownwidems (Washington D.C. has become the enemy of free people everywhere!)
[ Post Reply | Private Reply | To 1 | View Replies]
To: Swordmaker
It was Immanuel Velikovsky who, in Worlds in Collision, drew our attention to the ancient memory of lightning passing between planets.

The historian Pliny, for example, wrote:

“Most men are not acquainted with a truth known to the founders of the science from their arduous study of the heavens.”

Thunderbolts, Pliny wrote, “are the fires of the three upper planets.”

A vivid description of an interplanetary discharge was also given by Pliny:

“Heavenly fire is spit forth by the planet as crackling charcoal flies from a burning log.” When such a discharge falls on the earth, he reported, “it is accompanied by a very great disturbance of the air,” produced “by the birth-pangs, so to speak, of the planet in travail.”

Pliny also referred to an ancient Etruscan tradition describing a bolt from the planet Mars that fell on Bolsena - “the city was entirely burned up by this bolt.”

Similarly, Pliny’s contemporary, the naturalist Seneca, distinguished the “lesser bolts” of the local storm from the vastly more powerful bolts of the planet Jupiter, “by which the threefold mass of mountains fell.” Mystery of the Cosmic Thunderbolt