AND: White House Coronavirus Task Force to wind down I’m a bit confused... but first a disclaimer- no, under no circumstances would I wear a mooslim covering of any kind. But.. I thought the masks might thwart spy eyes in the sky?? Put a hat, sunglasses, mask on... no one knows it’s you??

Agghhh... I have a headache.

BREAKING: New “Whistleblower”, Dr. Rick Wright has filed a new complaint alleging he was transferred to NIH because he was at odds with HCQ treatments & he thinks the money should go to “proven” medicines ... except there is nothing other than HCQ currently proven ... so I don’t know what his “complaint” is; my complaint is that people like Wright & Vindman still think they call all the shots.

https://pubmed.ncbi.nlm.nih.gov/16115318/
https://www.thelancet.com/journals/lancet/article/PIIS0140-6736(20)30251-8/fulltext
When the protein sequence of the SARS-CoV-2 receptor binding site was analyzed, an interesting result was found. While SARS-CoV-2 is overall more similar to bat coronaviruses, the receptor binding site was more similar to SARS-CoV.
https://www.cell.com/cell/fulltext/S0092-8674(20)30262-2?_returnURL=https%3A%2F%2Flinkinghub.elsevier.com%2Fretrieve%2Fpii%2FS0092867420302622%3Fshowall%3Dtrue
Both SARS-CoV-2 and SARS-CoV use the same host cell receptor. It also found that, for both viruses, the viral proteins used for host cell entry bind to the receptor with the same tightness (affinity).
Knowledge is power.
Q

Purple is the color of ‘Resistance’ and anyone wearing that color is supporting the Smelly Old Hag...
________

When wearing context. I’m not giving up wearing purple. And I didn’t give the rainbow away either. 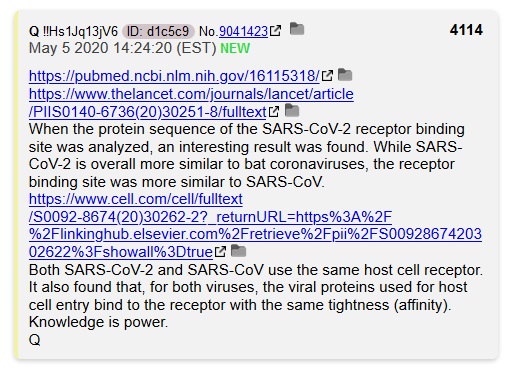 https://pubmed.ncbi.nlm.nih.gov/16115318/
https://www.thelancet.com/journals/lancet/article/PIIS0140-6736(20)30251-8/fulltext
When the protein sequence of the SARS-CoV-2 receptor binding site was analyzed, an interesting result was found. While SARS-CoV-2 is overall more similar to bat coronaviruses, the receptor binding site was more similar to SARS-CoV.
https://www.cell.com/cell/fulltext/S0092-8674(20)30262-2?_returnURL=https%3A%2F%2Flinkinghub.elsevier.com%2Fretrieve%2Fpii%2FS0092867420302622%3Fshowall%3Dtrue
Both SARS-CoV-2 and SARS-CoV use the same host cell receptor. It also found that, for both viruses, the viral proteins used for host cell entry bind to the receptor with the same tightness (affinity).
Knowledge is power.
Q

Purple is the color of ‘Resistance’ and anyone wearing that color is supporting the Smelly Old Hag...

Purple is my favorite color. I wear purple; I have highlighted my grays with purple. I adore purple flowers - all of ‘em. And:

I do not support Hitlery or anything to with/about her.

In the video, a whistleblower nurse reports medical mismanagement in the extreme re COVID. She gives many examples (e.g., a person with Covid being given insulin but not antibiotics, giving manual chest compressions to a person with a pulse, staff applying wrong therapy etc.)

Below is the auto generated transcript from the portion of the Dustin Nemos video featuring a nurse. We've been hoaxed before, use discernment, but I believe this is real. What is remarkable is that she almost seems to be surrounded by staff who are uniformly indoctrinated; for whatever reason, all around her are comfortably onboard with what is being done to patients. If she's legit, then she needs prayer and the video will be taken down or otherwise misrepresented soon. She advises people to stay out of NYC hospitals...

yeah i mean i tried talking to hospital
management i tried calling cms i
tried calling the equivalency of their
division of aging i tried calling a
couple black power groups in the area
who else i mean this took several hours
this is why i missed that email
the revision for my proposal because
guys i tried contacting a newspaper
nobody called me back
so
yeah stacy f*** you'd probably lose your
mind because you're not a sociopath
thinking this is all okay
that's just weird guys they're all okay
with it like
i tell you we get on the f******* bus and
we go into the twilight zone here
like how do you not know when your
patient is dead
for real i mean i'm back at that other
unit when s*** was just crazy and bodies
were just f******* dropping yeah i
couldn't understand that but guys you
have a s*** ton of staff
like yeah we have hundreds of extra
nurses that have been are still here
that are not part of hospital staff
managing these patients but
we're on top of it now we're on top of
it now there's no reason
to not know when your patient's dead
i mean there's no reason you should be
managing a dialysis machine
never knowing how to use a dialysis
machine when there's a dialysis nurse in
there
my hand's shaking because i'm so pissed
yeah that nurse that was sleeping in the
corner there
she was she's from the she was from the
er yesterday like when i had my first
original breakdown
and uh
and uh she's like well they don't just
unnecessarily intubate them they try and
you know would you buy them like
girl i am not f******* green i know some
like
people need a tube dropped okay like i'm
not saying that like at the other
hospital they were doing unnecessary
intubations because they had no f*******
clue how to put the vent
into in into cpap or bipap yeah
i mean
so i mean but yeah there's like legit
indications like f*** that dude needs a
tube yeah
i i know that i know that
god yeah my lead at the other hospital
who advocated for the patients too
like the first day i got there and i was
in orientation like that crash course
orientation he warned me that i was
gonna have a problem
he would advocate for the patients too
they f******* moved him too
he's at a completely different hospital
i tried reaching out to him but he
hasn't texted me
like what if you think i saw what was
bad he saw way worse s*** than that
um okay how bad is my face look i'm just
gonna wear respirator ain't gonna f*******
know no different
i was in here freaking the f*** out
all right guys i'm going in the unit
let's see how they kill him there okay
stay safe stay out of nyc for your
healthcare
you
1,274 posted on 05/05/2020 12:41:19 PM PDT by ransomnote (IN GOD WE TRUST)
[ Post Reply | Private Reply | To 1273 | View Replies]
To: DainBramage

DainBramage wrote: “I find it hard to believe that the NSA would give away software that doesn’t eventually send something back to the NSA.
Like a copy of your hard drive, web history, country of origin, etc.”

Yikes, never knew it was deprecated, as it always worked for me on FR!

And is there any replacement for the VERY VERY OLD "blink" ?

SKY event by any chance?

https://www.reuters.com/article/us-health-coronavirus-tanzania/tanzania-suspends-laboratory-head-after-president-questions-coronavirus-tests-idUSKBN22G295
Sometimes you can’t TELL the public the truth.
YOU MUST SHOW THEM.
Q 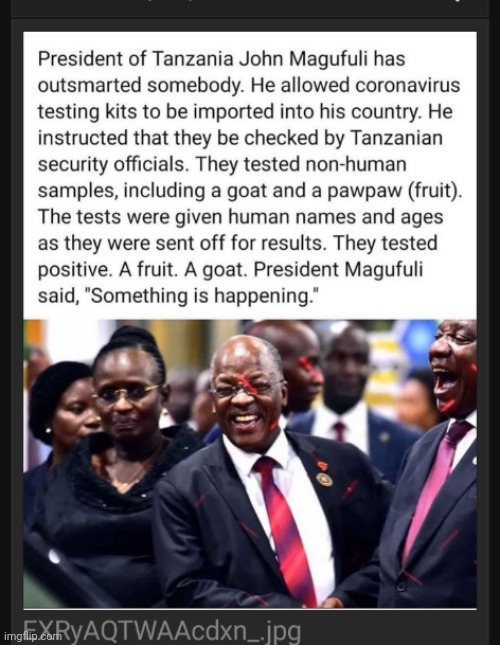 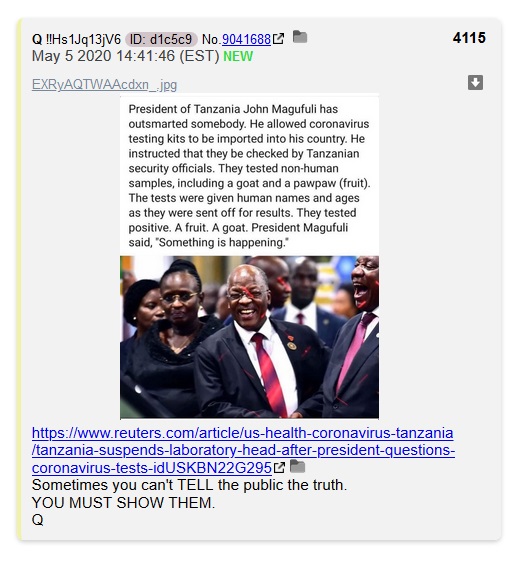