James Comey is still very much a wild card. Seems odd that he has not taken another job. But maybe he can’t.

I looked all through the 17th and found nothing. I thought the RM op might qualify, but now that I see the Q said "close", maybe the 18th OP fits...

I wonder if the normal game chat rooms were down on the 18th?

"Now listen, Fat. is that any relation to Corn Pop, You DogFaced Pony Soldier?"

where does this info come from?

who gives the reports?

Agree. Interesting that you caught this early on. Chances are FreshCamel was just snooping around the chats after figuring out how to do it and just happened to have the situational awareness to realize it was significant. I’m sure most gamer chat doesn’t include mention of Mueller, Turkey and Ergogan which were in plain text. Maybe not enough to figure out or confirm the abbreviations which is why he asked for help.

Comey and the Star Wars toys was just the kind of easily-explainable troll he would do.

Seriously, at the top of every Q thread, there are a number of posts (more or less within the first 10), that have clickable links with some background.

>> According to reports they will be broke tomorrow.

You’ve been on FR since 2002, we’ve had a Q thread going since the end of 2017, and you are just now asking questions? Something is wrong with this picture.

148 posted on 04/29/2020 12:17:30 PM PDT by nanetteclaret (The Fourth Estate is the Fifth Column)
[ Post Reply | Private Reply | To 144 | View Replies]
To: ransomnote; Steven W.; WaltStuart; bagster; greeneyes; generally; Cats Pajamas; TEXOKIE; ...
At-Home Abortions Double During Coronavirus: “It Was So Comforting” to Kill My Baby at Home

Where is President Trump? Who is heading the FDA, and HHS these days?

Thanks for new thread! They have rescheduled my “elective” surgery for 2 weeks from now. I’ll be at COVID central here. Hope I leave it there. Anyway, glad we are getting some stuff back on the calendar.

nanette, let's all just count to 10

Read slowly and carefully.
Knowledge is power.
https://2009-2017.state.gov/documents/organization/119629.pdf
>Irregular warfare is far more varied than conventional conflict: hence the importance of an intellectual framework that is coherent enough to provide guidance, and flexible enough to adapt to circumstances.
>American counterinsurgency practice rests on a number of assumptions: that the decisive effort is rarely military (although security is the essential prerequisite for success); that our efforts must be directed to the creation of local and national governmental structures that will serve their populations, and, over time, replace the efforts of foreign partners; that superior knowledge, and in particular, understanding of the ‘human terrain’ is essential; and that we must have the patience to persevere in what will necessarily prove long struggles.
>Insurgency, however, can and will flourish in the
modern environment. The strains created by globalization, by the collapse of weak state structures, by demographic, environmental, and economic pressures, by the ease of cooperation among insurgent groups and criminals, and by the appearance of destructive radical ideologies, all augur a period in which free and moderate governance is at risk.
[Insurgency is the organized use of subversion and violence to seize, nullify or chal- lenge political control of a region. As such, it is primarily a political struggle, in which both sides use armed force to create space for their political, economic and influence activities to be effective. Insurgency is not always conducted by a single group with a centralized, military-style command structure, but may involve a complex matrix of different actors with various aims, loosely connected in dynamic and non-hierarchical networks. To be successful, insurgencies require charismatic leadership, supporters, recruits, supplies, safe havens and funding (often from illicit activities). They only need the active support of a few enabling individuals, but the passive acquiescence of a large proportion of the contested population will give a higher probability of success. This is best achieved when the political cause of the insurgency has strong appeal, manipulating religious, tribal or local identity to exploit common societal grievances or needs. Insurgents seek to gain control of populations through a combination of persuasion, subversion and coercion while using guerrilla tactics to offset the strengths of government security forces. Their intent is usually to protract the struggle, exhaust the government and win sufficient popular support to force capitulation or political accommodation. Consequently, insurgencies evolve through a series of stages, though the progression and outcome will be different in almost every case.]
Q 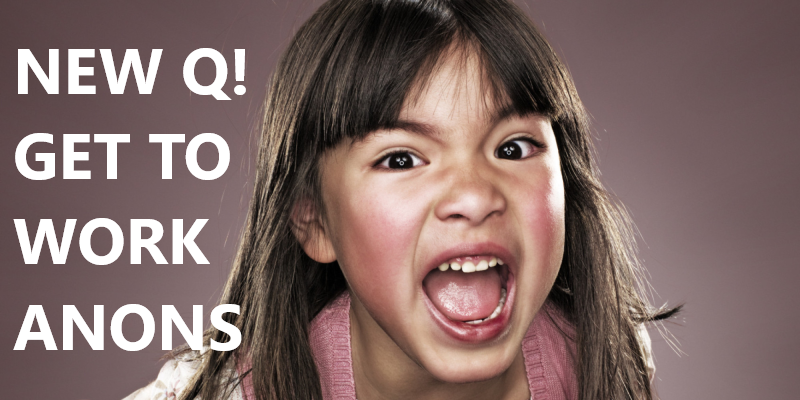 And what happens to the dead fetus after the abortion at home? 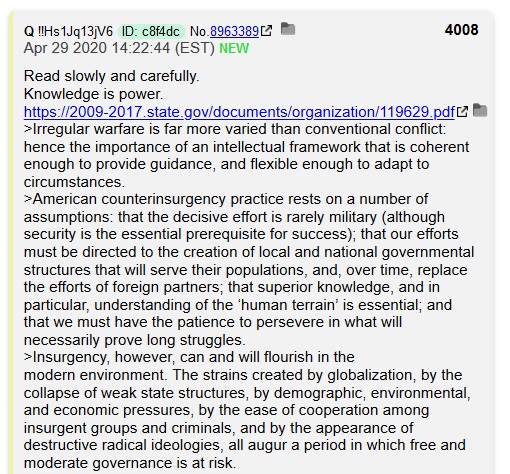 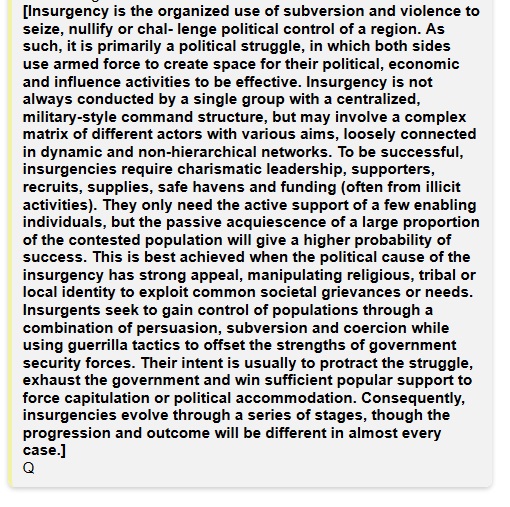 New Q ! Everybody at attention!

Good ridden's. DJT eliminates another plague upon the world.

159 posted on 04/29/2020 12:33:35 PM PDT by thingumbob (Antifa. Carrying on Hitler's legacy one beating at a time.)
[ Post Reply | Private Reply | To 105 | View Replies]
To: BiggBob
"but the passive acquiescence of a large proportion of the contested population will give a higher probability of success."

This is why the MSM, Fascistbook, Tattler etc need to be taken out to put an end the bath of bs that keeps them asleep.