Thank you - same one as the repeatedly suspended name_redacted?

742 posted on 09/05/2019 1:45:36 PM PDT by little jeremiah (New tagline in the pipeline)
[ Post Reply | Private Reply | To 738 | View Replies]
To: jeepertrains; All
Just turned the radio on and the media is still going bat crap crazy about “SharpieGate”. They are spending hours and hours on something that means nothing and has zero effect on anyone’s lives.

I was with you all the way Alabama. The Fake News Media was not! https://t.co/gO5pwahaj9— Donald J. Trump (@realDonaldTrump) September 5, 2019

#HurricaneDorian is projected to reach southern Alabama by the early part of the week. We are watching closely and #ready to act. Are you? pic.twitter.com/iMH0DnE4QO— AL National Guard (@AlabamaNG) August 30, 2019

Just as I said, Alabama was originally projected to be hit. The Fake News denies it! pic.twitter.com/elJ7ROfm2p— Donald J. Trump (@realDonaldTrump) September 5, 2019 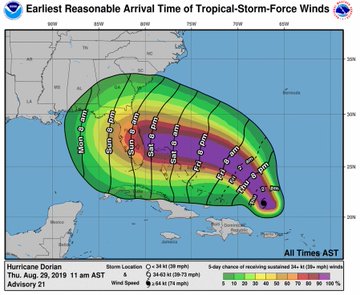 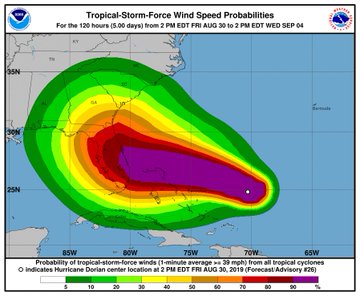 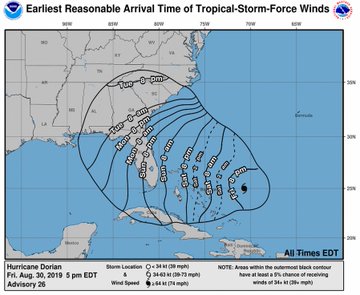 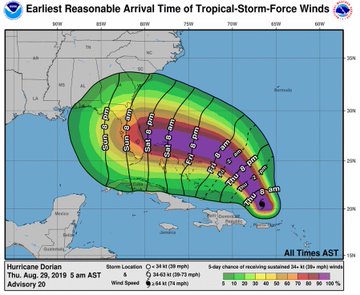 743 posted on 09/05/2019 1:46:50 PM PDT by HoneysuckleTN (WWG1WGA! Q / Q+ || President Trump 2020 KAG! :) MAGA!)
[ Post Reply | Private Reply | To 739 | View Replies]
To: jeepertrains
Just turned the radio on and the media is still going bat crap crazy about “SharpieGate”. They are spending hours and hours on something that means nothing and has zero effect on anyone’s lives. Fun watching him steer the media to nonessential issues so he can get things that matter done.

Trump is slipping, he should have written on the bottom; NOAA-COVEFE

Ack! Those turned out bigger than I expected. I put the width at 50%, but it’s hard to tell how big an image is going to turn out in Preview. Sorry about that!

Heading back to school this fall? We like to call our Headquarters a "campus"-- but we're never on summer break. We have a cafeteria, gyms, a library, an auditorium, and collaboration spaces-- all designed with learning, teamwork, and mission in mind! #BacktoSchool pic.twitter.com/4dsJzsxeYy— CIA (@CIA) September 5, 2019

There's no point in my responding to Jack Black directly as he has an agenda that's not influenced by information.

I wasn't going to respond at all because I think most on this thread can spot the distortions in his post, but then I recalled that we have new names popping up as time goes on so I will make a few comments which I hope will be helpful.

Here's an example - my original remarks were clearly about the accusations leveled at 8ch that they are a breeding ground for mass shooters.

Did you see that Straw Man argument Jack propped up? I never said that those platforms were all the same, I said that the manifestos didn't originate on the chans and were posted on other platforms. If you bother to read Jack Black's posts, look for that distortion technique - it's one of his calling cards.

THIS is Jack's response to my comments about manifestos and the idea that 8ch does not incubate mass shooters? Everything EXCEPT the topic of mass shooters? Actually - it's just him embellishing his distortion. This stroll of Jack's is made all the more ironic because Jack has been called out a few times now for posting antisemitism on Free Republic. Yes. Really.

8chan has a free speech ethos. If it's not illegal, they allow it. This means crazy haters posting next to patriots - the patriots ignore the cray cray. In fact, I think some of them regard the cray cray as a handy KEEP OUT sign - they want people who will disrupt the flow of ideas with complaints to KEEP OUT, even if they personally find the cray cray repulsive. They skip it and read on.

Jack says the content of his Straw Man argument (anti-semitism, Nazi larping, crude racism etc. on 8chan) "...is why, LONG LONG before their internet service providers yanked the rug out from under them, and took them offline (probably forever), JimRob had forbidden content and links from there."

I have always thought JimRob was wise to make that decision to restrict 8ch links, although it can be inconvenient at times. Whenever Q comes under particular attack, shills flood 8chan will repulsive kiddie porn and other repellent content - it really becomes a cesspool and then regular readers warn the rest of us, "Stay away! 8ch is under attack and it's unbelievable what's being posted! GAH!"  At times like those, and during this period of time that 8chan is falsely portrayed as an incubator for mass shooters, Free Republic's decision not to post links is paying dividends. JimRob deprived anti-conservatives of a stick with which to beat us.

I have read 8chan so I find this comment by Jack silly, "Once the internet czars took the Daily Stormer off line, and succeeded, it was clear that they would go after lots and lots of other sites as the got around to it."  First they went for the Daily Stormer (nazi site) and then they went for 8ch, eh? No, 8chan and Daily Stormer are not equivalent at all. Autists helping WIN the war against the Deep State are in no way similar to Daily Stormer Nazis.

8chan was taken down because Q was posting there and people were being red-pilled. Public opinion was CHANGING (still is) and the Deep State wanted to staunch the flow of information the MSM conceals and distorts, when they are not outright fabricating "FAKE NEWS" to bring down our president.

This is the smallest victim card I've seen Jack play: "PS: Seeing as I've been accused of being a "paid shill" -- and I know for sure that I am not -- I have come to think that the constant accusation that everyone who has inconvenient opinions is paid opposition is a form of denial."

Jack's history on our Q threads is long and tedious. Were I to go out and collect links to all the negative statements he's made about people who post on the Q threads (not just Q, but people who post on our threads), it would take me forever and you'd find them remarkably repetitive. So repetitive in fact, that you might even call them talking points. Although he has portrayed us and our Q threads as toxic for a very long time now, he still seems to read every post!

He tried to start his Anti-Q thread within our Q thread. He opused off our threads and pushed the Microchip/Posobiec hoax long after both were (easily and thoroughly) exposed as fake news. When his attempts to build a following failed , he came slithering back to our threads. He still includes the following criticism of us on his profile page as of this writing:

Jack: "Q believers found this analysis incredibly irritating, and I eventually chose self-exile from their threads to avoid then endless stream of rude invective and insults directed at me from the believers."

Get that? On our threads we subject him to an "endless stream of rude invective and insults" and note he calls us "the believers" to portray us as a cult. Yet, he jest cain't quit us...

Jack is wrong about Microchip

Jack is wrong about Posobiec

Jack is wrong about Q

Jack is wrong about Q threads

Jack is wrong about FReeQs

Jack is wrong about 8chan

His persistence, consistency and talking point style have led many of us to conclude he is a shill. Your mileage may vary. Perhaps it could just be an unhealthy obsession? :/

Too far to drive from W MD.

ooh Baggie is back at it again
has the fro?

typical 8chan
everyone is a troll who disagrees

Well then, I'll just pile on with a refreshing #WalkAway story. Actor Isaiah Washington on why he left the dem party. 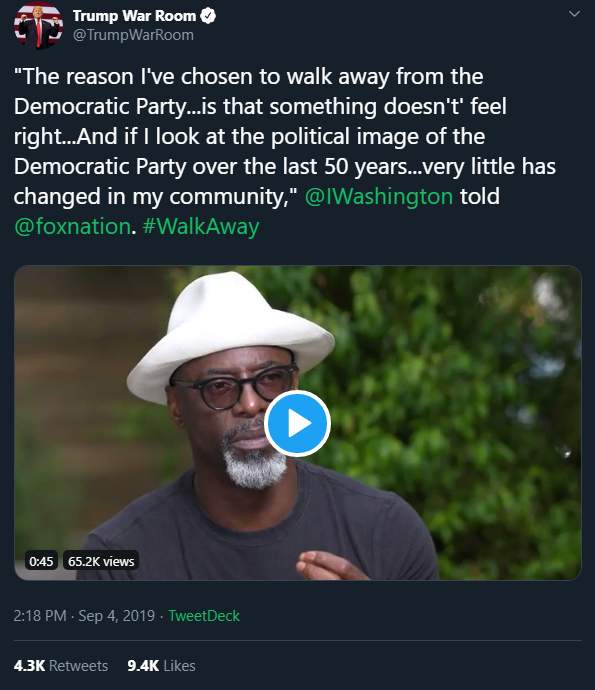 Balderdash! CNN already showed us that Alabama was gone and Mississippi slid over to Georgia.

Yes, because CIA does not want their employees out and about in the neighborhoods, doing local business where they can be mined for intelligence. They don’t want a bunch of pizza orders going out when everybody is burning the midnight oil.

And that looks like a big ol' Q drop to me!

This is a picture {scroll down} of the #3 agent mentioned in the video - Tashina 'Tash' Gauhar. The graphic was taken from a web page titled the Federal Employee Profile -- NOTE the picture has since been removed from that page. At the time documented in the video she was titled Deputy Assistant Attorney General for intelligence.

#686 Not all. Get an ornery Billy, don’t turn your back. He’ll give ya a nice head butt. Pin ya up against something.

The one being held is "The Argentina Journal: Paintings and Memories: The Israeli Secret Agent Who Captured Nazi War Criminal Adolf Eichmann Through His Art", by Peter Z. Malkin

Left side stack, top to bottom:

1. The Cuckoo's Egg: Tracking a Spy Through the Maze of Computer Espionage, by Cliff Stoll

2. A Woman of No Importance: The Untold Story of the American Spy Who Helped Win World War II, by Sonia Purnell

5. CIA: A History, by John Ranelagh

6. The Master of Disguise: My Secret Life in the CIA, by Antonio J. Mendez

Right side, top to bottom:

2. No clue. Could be the Braille version of the Beatles White album...

3. All the Best, George Bush: My Life in Letters and Other Writings, by George (H.W.) Bush

5. The Hunt For Red October, by Tom Clancy

I'm just going to assume we need to dig on this picture. Those books didn't get stacked there by themselves.

Shall we start with the Titles and Subjects, and then move on to authors?

By the way, when I was typing this titles or authors (partial or complete) on amazon, they were top of the search lists. I imagine people all over the world are looking them up trying to find the hidden meaning. From foreign intelligence, to Q researchers, to cabal.