Judge Judy rushed to hospital after losing it on-air... 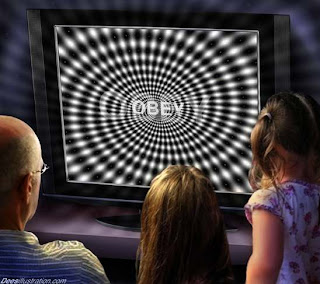 The Pentagon reportedly has developed a microwave device able to plant false thoughts and images into the mind of a targeted individual... producing the same sort of reaction we've now seen in four separate incidents of inexplicable mind-melts while speaking on live television...

Video clips of the embarrassing episodes have become internet sensations, but the most recent Judge Judy video is yet to surface on YouTube (Daily Mail):

In four high-profile cases, the latest involving fast-talking Judge Judy, the presenters have started off speaking properly but have then descended into undecipherable nonsense - looking confused and unstable.
The frequency of the 'attacks' - and the fact that recorded examples of the mental meltdowns have been popular on websites - has led to conspiracy theorists pointing the finger at shadowy government experiments.
A popular theory being circulated online blames the U.S. Military’s supposed research into using microwaves as a mind control weapon. America has never admitted conducting such research but proponents say the effects - produced by microwave signals stimulating the brain with fake images and voices - exactly mimic those displayed in the recent on-air breakdowns
...
The phenomenon, which has provided internet video sites with some of the oddest footage for months, has now claimed one of America’s most highly paid broadcasters... 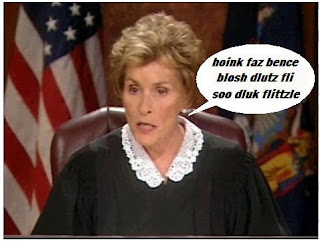 Judge Judy -aka Judith Sheindlin- banks $28M/year and can boast starring in the most watched American daytime TV show. But after not being unable to halt her freaky speaking-in-tongues episode last Wednesday afternoon, the celebrity judge said she "didn't feel right", halted the show, and requested an ambulance.

Most have already seen the clip of a CBS reporter Serene Branson rambling-on incoherently from outside the Grammy Awards in Los Angeles. She reported feeling "terrified and confused", with a pounding migraine-type headache that came right out of the clear blue sky (make that brown sky if we're talking LA here lol).  Upon medical examination, it was said she suffered a "complex migraine" whose symptoms "closely mimicked a stroke."- hmmm. 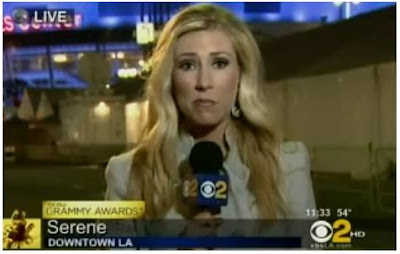 Canadian Mark McAllister -covering the Libyan conflict for the Global Toronto News went into quite a block of nonsensical babble himself, clearly not able to get a grip. Later, the newsman blamed the on-air meltdown on a sudden migraine with no apparent cause:

Wisconsin reporter Sarah Carlson of WISC-TV was yet another hit by the odd phenomenom. Like the others, she began smooth enough in her TV reportage on Wisconsin’s legal challenge to ObamaCare, but suddenly she began talking gibberish as the camera spun way to a unsettled co-presenter. Carlson is the only one in these cases with any medical history of seizures, but the symptoms where identical to the other three odd verbal implosions.

The origins of psychological warfare came from Nazi Germany, with our own PsyOps initially developed in-concert with their psychological experts, brought back to America in the very same way that V-2 rocket scientists like Werner Von Braun were.

US military research into advanced specific brainwashing and mind control techniques originated in the midst of the Korean war: American officers began to note that a surprisingly large % of US POWs nabbed by the Norks and Chinese defected over to the communists... some remain in Pyongyang to this day. They then discovered the sinister Chinese craft of brainwashing was at play... employing a propaganda and torture program to transform hapless American POWs into loyal communist automatons.

Of course totalist cults/New Religious Movements employ low-tech thought control techniques to great effect, much the same manner as totalitarian regimes... the tightly-choreographed  ObamaMania cult of 2008 surely being no exception.

And while such programs are invariably shrouded in mystery and official denials, the CIA and Pentagon is suspected to have studied and experimented with manipulation of human thought for decades- and we all know how they like their hyper-tech gadgets.

US plans for microwave and focused-energy weapons are common knowledge today... so I sure wouldn't put it past them, actually would be more surprising if they didn't have such a mind control capability in the works.

So, WHY the seemingly-innocuous on-air targets...?

If this is all true, they've only hit live TV presenters with these invasive microwave zaps... question is: precisely who are the most powerful men in the Pentagon trying to send a message to with this very public display of fearsome technological might?


More at Reaganite Republican... have a super weekend, FReepers

More like a teleprompter conspiracy...the machines are just getting ready for the Big One

I read this article linked from Drudge earlier. I tried to find the Judge Judy breakdown video - cannot. It isn’t on YouTube either.

Ping. This is real.

“The Pentagon reportedly has developed a microwave device able to plant false thoughts and images into the mind of a targeted individual..”

So how are we supposed to tell if Pentagon action is the cause or if it’s just liberal thought processes leaking out?

before we go down this road and we look like loons, what medications where they on ( in common ) and what are the side effects? Where they dehydrated? I am not a doctor but I have been told these symptoms can come from such inputs or lack their of on the body...

This is a mind control experiment first developed by Dr. Miguelito Loveless in the 19th century.

Line your hat with tin foil and problem solved.

I very seldom watch Judge Judy. There are plenty of self-righteous, shreiking harridans out in the real world, so to me it’s not exactly a bull market for one on television. I must be in the minority, lol.

She is, admittedly, pretty close to top of the self-righteous, shreiking harridan heap, though. So, it’s oddly amusing to contemplate her actual speech devolving into the gibberish that her though processes have always been. The woman does not always grasp finer points of the law.

Can you say what convinced you?

The day is fast approaching when

the still small Voice of The Lord’s Holy Spirit will be able to direct HIS KIDS as to what is real, whether to turn left or right; wait; go forward or whatever.

And, imho, learning to distinguish HIS still small voice from our own thoughts and from the enemy is a process.

Scripture says, FOLLOW AFTER PEACE. Even in a crisis, HIS VOICE BRINGS A SENSE OF PEACE.

God is into TRUSTING HIM, ABANDONING TO HIM, COUNTING OUR LIVES NOT TOO DEAR TO LOSE FOR HIM, TRUSTING HIS WORD, OVERCOMING IN HIS BLOOD & THE WORD OF OUR TESTIMONY, . . .