Humans may have come close to extinction about 70,000 years ago, according to the latest genetic research. 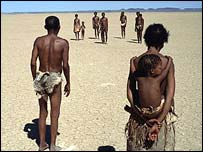 The study suggests that at one point there may have been only 2,000 individuals alive as our species teetered on the brink.

This means that, for a while, humanity was in a perilous state, vulnerable to disease, environmental disasters and conflict. If any of these factors had turned against us, we would not be here.

The research also suggests that humans (Homo sapiens sapiens) made their first journey out of Africa as recently as 70,000 years ago.

Unlike our close genetic relatives - chimps - all humans have virtually identical DNA. In fact, one group of chimps can have more genetic diversity than all of the six billion humans alive today.

It is thought we spilt from a common ancestor with chimps 5-6 million years ago, more than enough time for substantial genetic differences to develop.

The absence of those differences suggests to some researchers that the human gene pool was reduced to a small size in the recent past, thereby wiping out genetic variation between current populations.

Evidence for that view is published in the American Journal of Human Genetics.

Because all humans have virtually identical DNA, geneticists look for subtle differences between populations.

One method involves looking at so-called microsatellites - short, repetitive segments of DNA that differ between populations.

These microsatellites have a high mutation, or error, rate as they are passed from generation to generation, making them a useful tool to study when two populations diverged.

Researchers from Stanford University, US, and the Russian Academy of Sciences compared 377 microsatellite markers in DNA collected from 52 regions around the world.

Analysis revealed a close genetic kinship between two hunter-gatherer populations in sub-Saharan Africa - the Mbuti pygmies of the Congo Basin and the Khosian bushmen of Botswana.

The researchers believe that they are "the oldest branch of modern humans studied here".

The data also reveals that the separation between the hunter-gatherer populations and farmers in Africa occurred between 70,000 and 140,000 years ago. Modern man's migration out of Africa would have occurred after this.

An earlier genetic study - involving the Y chromosomes of more than 1,000 men from 21 populations - concluded that the first human migration from Africa may have occurred about 66,000 years ago.

The small genetic diversity of modern humans indicates that at some stage during the last 100,000 years, the human population dwindled to a very low level.

It was out of this small population, with its consequent limited genetic diversity, that today's humans descended.

Estimates of how small the human population became vary but 2,000 is the figure suggested in the latest research.

"This estimate does not preclude the presence of other populations of Homo sapiens sapiens (modern man) in Africa, although it suggests that they were probably isolated from each other genetically," they say.

The authors of the study believe that contemporary worldwide populations descended from one or very few of these populations.

If this is the case, humanity came very close to extinction.

Poor data makes for junk science--and no accountability makes for poor data. These are unknowable things, yet the scientists make such outlandish assertions. Any time the theories run into rough patches, they are helped out by "Hans Vavink"--you know, "And zen a millions years happens" --with hands waving.

I found this, but I also found that Vela Supernova occurred 11K yrs ago.This does not fall within the 70-140k window.

How do I know this? Well, because the Dogon say so! Hey, they've been right before....

45 posted on 06/10/2003 9:28:27 AM PDT by Paradox
[ Post Reply | Private Reply | To 1 | View Replies]
To: CobaltBlue
"This is sort of OT but speaking of self-selection, have you read any of the recent research on human sperm? There are different types of sperm that have different functions - killers, blockers, and egg-getters."

Yup, read that too. I had a discussion with my son( Dr blam) at Christmas.

I proposed to him that humans are evolving daily to comprehend pollution and all the other things that we're worried about these days. The 'selectivity' is occuring at the egg/sperm interface and post fertilization spontaneous abortions. If the mother's body is polluted, only the unions that can withstand the pollution will survive to birth. So...we're having births of stronger humans daily.

From reading some Jewish Kabbalist references, there's some argument in those quarters that Adam and Eve were the first "spiritually aware" humans (which is used to explain things like "who did cain marry" and "who went to live in the city that he built", etc), and that non-spiritually-aware humans pre-existed

48 posted on 06/10/2003 9:36:03 AM PDT by SauronOfMordor (Java/C++/Unix/Web Developer looking for next gig)
[ Post Reply | Private Reply | To 29 | View Replies]
To: blam
This is the first time I have seen the mention that the human race was so close to extinction aside from your own posts. So, it appears that we all emerged ancestrally from Africa, but not long ago and only because human life was extinguished everywhere else. I know some Chinese are not going to buy this hypothesis. They are taught in school that they evolved in China and that they were the earliest humans to evolve, and so are evolutionarily the most advanced.
49 posted on 06/10/2003 9:39:30 AM PDT by RightWhale (gazing at shadows)
[ Post Reply | Private Reply | To 1 | View Replies]
To: Mamzelle
You must be speaking of ID, either that, or anything that collides with your worldview is junk science.
50 posted on 06/10/2003 9:39:45 AM PDT by Aric2000 (If the history of science shows us anything, it is that we get nowhere by labeling our ignorance god)
[ Post Reply | Private Reply | To 41 | View Replies]
To: blam
"The small genetic diversity of modern humans indicates that at some stage during the last 100,000 years, the human population dwindled to a very low level."

In fact, it's interesting that the Bible gives a tantalizing glimpse into the past where a prophet says that man was completely eliminated long before Adam but the Earth was left intact.

Another theory that also fits is that we all came from Adam and Eve.

It all boils down to what one wishes to believe.

53 posted on 06/10/2003 10:33:32 AM PDT by MEGoody
[ Post Reply | Private Reply | To 1 | View Replies]
To: nightdriver
"In fact, it's interesting that the Bible gives a tantalizing glimpse into the past where a prophet says that man was completely eliminated long before Adam but the Earth was left intact."

Which prophet was this?

Take a look at Jeremiah 4, along about verse 22-25 or so and tell me where you think the prophet is looking.

The essential Post-Modernist-Deconstructionist point of view. The primary difference between the scientific viewpoint and that of the Creationist-PMD axis is that "it" doesn't depend on what one wishes to believe; it depends on the evidence whether one wishes for it or not.

Another way you can tell real science from junk is the way the scientist qualifies his assertions. For instance, pharmeceudical studies are mazes of qualifications--that's because if the lab manager makes assertions too boldly, his medicines will kill people and his career will be over.

But the Carl Sagans and paleantologists can make such "it is understood that Nellie Neanderthal got a divorce from Hymie Sapiens oh...hans vavink in air...about ten million years ago." Who's to say the divorce didn't take place?