On Saturday night, about 100 leftist protesters dressed in antifa’s signature black bloc set fire to the Immigration and Customs Enforcement (ICE) headquarters in Portland, Ore., with people inside the building.

At around 9 p.m. West Coast time, Grace Morgan reported that roughly 100 people had showed up at ICE building to protest. Activists tagged the building with graffiti reading “F**K ICE” and “This is indigenous land.” They also set a fire, fired a flare above the roof and threw eggs at the door.

Parts of the fence around the ICE facility in Portland OR have been dismantled by protesters & laid against the main entrances. Federal agents get on the loud speaker & warn not to trespass, including press. #PortlandProtests pic.twitter.com/cqiyflcZ26

Agitators chanted, “Every city, every town, burn the precinct to the ground” on repeat as they lit the building on fire. Independent Media PDX captured footage of the arson.

Andy Ngo, editor at large at The Post Millennial, noted that an antifa agitator gave the Black Lives Matter fist salute while the crowd cheered at the ICE building catching fire. “Officers were trapped inside when antifa set the building on fire,” he claimed.

“Every city, every town, burn the precinct to the ground”

An #antifa gives the #BLM fist salute while the crowd cheers on the burning of the @ICEgov Portland facility last night. Officers were trapped inside when antifa set the building on fire. pic.twitter.com/VYgRlvMUTo

After antifa set the building on fire, federal agents came out to disperse them with pepper balls. 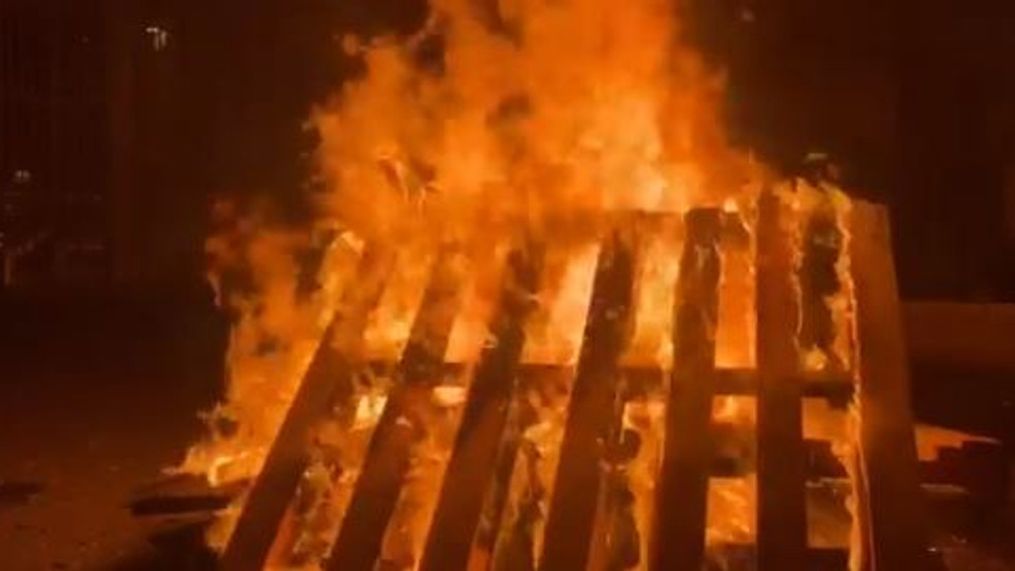 FIRES SET AT PORTLAND ICE BUILDING, NO ARRESTS MADE YET

Nothing will happen to them since it’s their right to protest.

Sounds like an insurrection to me. But there’s nothing but the sound of crickets from Bella Pelosi’s office.

Hey, if people don’t want other people setting fire to buildings with people inside, maybe they should make a law against it.

when they burn Americans alive, will that be crime?

or just another opportunity for the FIB
to get some new snuff tapes to view
along with their two year old (and more) child rape tapes
they have accumulated, protected, and enjoyed
supplied by the White House’s undocumented pharmacist?

That’s nothing compared to Trump’s insurrection on January 6th.

There won’t be any prosecutions because they weren’t wearing MAGA hats. It’s getting to where the only crime in this country is not being a Democrat.

Good thing antifa is just an idea, or it would be deadly!

Prissy Wray: “Antifa is an idea”

Newspeak: set fire. In normal language: arson-a felony. Most places citizens may stop those kinds of felonies with deadly force.

“Antifa Sets Fire to Portland ICE HQ With People Inside..”

In the still free parts of America that’s normally a killable offense.

I’m sure the FBI will get right to identifying the insurrectionists and arresting them and charging them with arson, attempted murder, trespass, damaging a Government building and other Federal charges. They will they will then be put in solitary confinement and not granted bail. I have heard that is how it is done.

We need to KILL as many of them as we can as fast as we can.

Because if he wasn't, we wouldn't ever hear about this attack on our country by domestic foreign inspired and funded enemies.

Ngo is an American hero.

These animals need to be shot dead in the street.

Are these people being incited by far left Democrats & the liberal Administration? Is inciting violent protests reason for impeachment or recall of elected officials who encourage or condone violence?? ohhh, wait...did this really happen ....isn’t Antifa a myth or simply an ‘idea’??