In 2020, as we begin a new decade, Dr Sam Osmanagich and The Bosnian Pyramid of the Sun Foundation is celebrating its 15 th year since multidisciplinary investigations of the Bosnian Pyramids began. This year’s upcoming summer excavation season promises to be the most active yet, with active archaeological excavations taking place across the pyramid valley, both above and below ground on the Bosnian Pyramids of the Sun and Moon, Vratnica Tumulus, Ravne Tunnels, Ravne3 Tunnels and the newly discovered Ravne4 Tunnels.

TOPICS: Culture/Society
KEYWORDS: bosnia; godsgravesglyphs; ohsomysteriouso; pyramids Navigation: use the links below to view more comments.
first 1-20, 21-40, 41-60, 61-72 next last
More proof of world-wide pyramid building in ancient times. This one is bigger than the Great Pyramid at Giza. Who knew?
1 posted on 02/08/2020 5:19:07 PM PST by wildbill
[ Post Reply | Private Reply | View Replies]
To: SunkenCiv

At 300 meters, it is TWICE the height of the Great Pyramid of Giza .

Total, unadultered, 100% BS. The history of the Balkans reaches back prior to the Roman Era. If there were any such “pyramids” they would have been well-known since ancient times. These are hills. Nothing more. Like below.

I’ve been receiving unsolicited emails about the Bosnian ‘pyramids’ for years.

The crude tunnels, shored up with crude “drywall” stonework are interesting, but hardly at the level of the pyramids. The “Pyramids” there appear to be natural, perhaps exteriorily shaped by humans, hills.

I would like to see an unbiased investigation into them.

The way this is presented makes it appear to be self promotion.

Where are all the pictures showing the excavations in progress?

Maybe there is a web site somewhere.

In the era of digital pictures there is no excuse not to have a data base of 20 pictures a day, at least, with measuring devices, gps coordinates, surveying, etc.

6 posted on 02/08/2020 5:33:12 PM PST by marktwain (President Trump and his supporters are the Resistance. His opponents are the Reactionaries.)
[ Post Reply | Private Reply | To 1 | View Replies]
To: Simon Foxx
I tend to agree. Here's Trempeleau Mountain in the Mississippi River near Winona, MN. It's not a pyramid either: 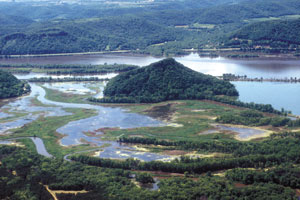 I checked out some sites on google about this and it appears this has debunked MANY times by many scientists and archaeologists.

The idea was drummed up by a Bosnia businessman who now lives in Texas :)

I just filled the Challenger with shovels, Gatorade and 20 snickers bars and I’m heading there now from Staten Island to check it out myself.

We have Hay Rick Mountain in Texas, but it is not hay.

When I clicked the article itself, this is one of the interesting links I found. The ages are based on organic metter found in the tunnels.

Except, there doesn't appear to be any serious documentation of the "find".

The date of 29,000 years was obtained from a piece of organic material retrieved from a clay layer inside the outer casing to the pyramid which underwent radiocarbon dating. It follows a sample date obtained during the 2012 dig season on material located above the concrete at 24,800 years.

It is pretty easy to determine if something is manmade. The signatures are obvious.

When you have to use the latest technologies to claim something is not a natural formation, you are grasping at straws, attempting to wring evidence from nothing.

There are several volcanic hills near me in Arizona, that have a pyramid look to them. The pyramid shape is a naturally stable one.

And Mt. Whitney was constructed by billions of years of labor by Indigenous Native Americans.

In July 1864 it was named for Josiah Whitney, then the State Geologist of California.

To compound the ‘male’ ‘white’ connection, his name is “WHITnEy!”

As a Serb, I would agree with you -afterall, all you have to do is look at my name. :-)

lol, It was a cool curious theory for awhile though. But I have looked at it on Google earth, and it is just a unique hill. The way they take all the pictures makes it appear symmetric like a Pyramid, but it is not at all when you look at it from above straight down on it. Some trick photography being used to make it look like something it is not.

It REALLY looked like a Pyramid in the picture.

But with the internet it’s hard to fool potential tourists :)

The Van Danniken school of ancient mysteries tends to obfuscate the actual who dunnit. There was a near extinction level event in historic times called the Younger Dryas Event that comes down to us in the form of the Biblical flood myth. But this myth exists in the origins of all ancient stories - a period of fecundity destroyed by an epoch of upheaval. Immanuel Velikovsky, and Ignatius Donnelley, began this research and it continues in the works of David Talbott, Dwardu Cardona and Ev Cochrane. Google is your friend. Curiosity is your friend.

Silliness and superstition on baseless writings is my enemy :)