(National Sentinel) Game, Set, Match: The Democrats showed their true colors — again — over the past two weeks by debasing the judicial confirmation process with gutter accusations of sexual misconduct by non-credible accusers.

It was the Left’s latest effort at destroying yet another institution — another pillar of government — by turning the process into a nightmare few people will want to subject themselves to in the future.

Nevertheless, thanks to the insanity, Republicans had a good week, as noted by Senate Majority Leader Mitch McConnell, R-Ky.

In an interview with Fox News‘ Laura Ingraham Friday night after the full Senate voted to advance Judge Brett Kavanaugh’s Supreme Court nomination to a confirmation vote on Saturday, McConnell stuck it to Democrats and gave them some counsel they will very likely ignore:

Mitch McConnell: “I think we reaffirmed that in this country you’re presumed innocent. Presumption is in favor of innocence. We also learned that you should not allow mobs to intimidate you. I think it unified us… Made us excited for the November election. It was good for the American people to see that these people were stood up to and didn’t get away with it. They did not win. That’s the most important thing…

Laura Ingraham: How radical has the Democratic Party of today become?

Mitch McConnell: It’s a pretty wild bunch. I mean it’s pretty clear they were willing to do anything, say anything to try to win. No boundaries.

Laura Ingraham: You still have close friends in the Democratic caucus after all of this or emotions pretty raw? 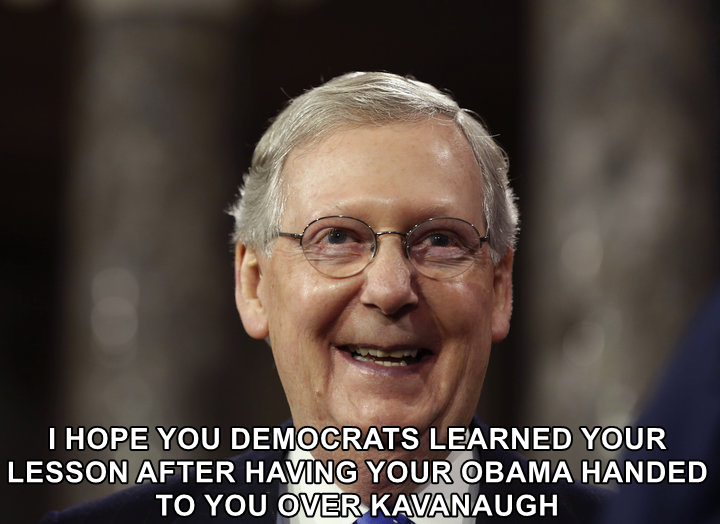 Kiss our ASSES lurking DUmmies and commies. You LOSE, losers!

I may not agree with everything Mitch McConnell does, but I have the utmost respect for him, and that’s something new.

Donated the $50 victory pledge I made - hope others follow suit with a few bucks.

They learned their lesson I am sure of that.
Next time they will ramp it up 10 fold.

Many of them lost it when Reagan left office.

Hey, RBG! Are you just nodding off again, or is it something more permanent?!?

Well, you take your wins and smiles where you can get them!

Yes, he is 2-0 for Trump’s Supreme Court picks, and they haven’t been easy ones.

T the great has certainly raised the testosterone level of limp dicked republicans. Maconell has done am amazing job with the judges. 147 on appellate courts t will have appointed about 40 after 2 years. Sc hears 80 cases,a year appellate 1000’s.

Wait until Amy Coney Barrett is nominated to replace Ruth Ginsburg. They will go apesh!t. Of course they didn’t Mitch.

Kavanaugh confirmed.
Up yours Chuckie.
Onward to the mid-terms.