Kathy Griffin had some sharp words for Michael Moore on Thursday, after “Fahrenheit 11/9” filmmaker implored the left to “Stop hoping & start acting!”

In a tweet published Thursday, Moore made an apparent reference to Supreme Court nominee Brett Kavanaugh, who became the subject of an FBI investigation due to a sexual misconduct accusation leveled against him by Christine Blasey Ford.....

...“When is our side going to wake up and start FIGHTING? Stop hoping & start acting!” he added....

....To which Griffin replied, “Michael…WE LOST.” “What more could we have done? We don’t have the Senate or the Presidency. What more can we do for god sakes?”... 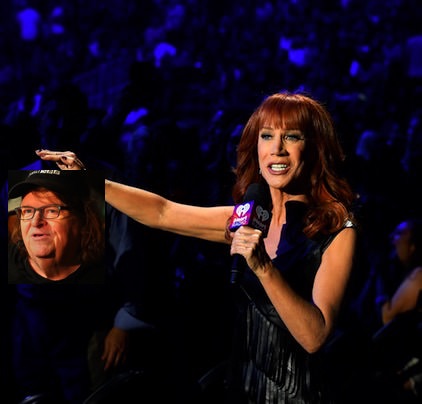 And in reality they know they have not lost very much.

Because in liberal states they have lost absolutely nothing.

And in states that have zero clinics, they have lost absolutely nothing.

For God's sake? Well how about not slandering a good man for ulterior motives for starts, but there is a lot more beyond that.

The question is what less that they could have done. They really overplayed this hand. This degree of depravity and lies will have consequences.

“When is our side going to wake up and start FIGHTING? Stop hoping & start acting!” he added
/
/

LOL these people live in another world.
Look at all the chaos, lies, destruction and violence they have been engaging in for the last few years.

They lost SALT and mortgage deductions. The fed is no longer subsidizing their liberal bloated budgets...

Watch for the next year or two as their liberal voters actually have to pay their federal taxes in fuller well as their bloated state taxes, see how those voters and those state politics change.

6 posted on 10/04/2018 10:21:59 PM PDT by HamiltonJay
[ Post Reply | Private Reply | To 2 | View Replies]
To: colorado tanker
The question is what less that they could have done. They really overplayed this hand. This degree of depravity and lies will have consequences.


We have to vote in large numbers and not just in red states, because these ghouls should not be allowed to have power again.

Count me to crawl over broken glass to vote. Well, OK, I really won’t have to, but you get the idea.

Then we will crawl over all these broken Democrats to vote...

That isnt what they are discussing in this article.

When Kathy (BloodyHead) Griffin is the voice of reason in any dialog, you know you’re way off track. I’ve been having a blast twittering to these Commie scum “Roe Roe Rougly through the Court”.

What exactly does Michael mean by, "start acting"?

In my county the Democrats has a 3:2 advantage for registered voters, but it’s not the totals on registered that counts but those who actually votes!

I thought of putting “Stop Hoping” as a text band on the top. But if I had put Ø’s head there instead of Moores, I’d be waiting for the knock at the door.

Fox News just televised Griffin’s latest tweet aimed at the R senators on Judiciary Committee; the tweet was highly redacted, of course. She’s maddest at Lindsey, lol. She is a pig.