"This is where American history becomes very politically incorrect because the Second Amendment was not drafted for hunting, or just self defense from an attacker. The Second Amendment was put into place to guarantee the rights of the individual to be equally armed as military, both foreign and domestic, in the event that the citizenry might actually, at some point, have to fight their own government," explained Swann.

"The Second Amendment is about making sure the population would not be controlled, dominated or oppressed by a government," Swann explained. "It's not my place to tell you what the Founders were thinking, or what they would be thinking today. But the principle of what they put into place had nothing to do with the kind of weapon they were guaranteeing, it was simply about matching force."

It is first and foremost, a protection FROM government, period!

One only need review the Declaration of Independence and the words “.....when in the course of human events .....that it becomes necessary to overthrow......etc.”

The men that crafted the Declaration and the Bill of Rights INCLUDING the Second Amendment knew oppression, knew sacrifice and knew what they wanted to prevent in future. They were inspired by God and resolute in their intentions and affirmation of our God-given rights.

I will not give up what has been given to me by God and affirmed to me by our Consitution. Ever. Not ever.

WXIX is in Cincinnati. Call letters for a Tucson station
would begin with a K.

3 posted on 01/04/2013 11:26:15 AM PST by Buckeye McFrog
[ Post Reply | Private Reply | To 1 | View Replies]
To: i88schwartz
"The Second Amendment is about making sure the population would not be controlled, dominated or oppressed by a government," Swann explained. "It's not my place to tell you what the Founders were thinking, or what they would be thinking today. But the principle of what they put into place had nothing to do with the kind of weapon they were guaranteeing, it was simply about matching force."

And, dear FRiends, this is the best argument in favor of our Second Amendment. We should avoid being drawn into trivial discussions about magazine size or military appearance, and etc, as these are losing arguments when the opposing side is playing to emotions.

But there is a Tucson station with the call letters K GUN!

And KDKA in Pittsburgh, east of the Ohio, has a call letter with a K. There are exceptions

The Second Amendment most clearly defines the fundamental relationship between the citizens of this country and those we choose to govern us.

He is right, if you look at the other weapons of the period during the American Revolution the muzzleloading flintlock musket was the assault weapon of its time, it could fire a shot every 15 seconds up to 75 yards or so. The other weapons common in use were cannon, cutting weapons, flintlock pistols and rifles, which loaded slower. Taking into consideration the British were still trying to fight the traditional European way in columns or squares in the open, the Americans could annihilate the British with their muskets. No doubt about it, the founders of this country wanted the general populace to have advanced weaponry to combat a tyrannical government if they wanted it.

Finally a TV reporter who actually gets it. And now you know why they’re desperate to disarm us.

10 posted on 01/04/2013 11:52:12 AM PST by CedarDave (Matt Damon is to natural gas fracking as Jane Fonda is to nuclear power generation.)
[ Post Reply | Private Reply | To 6 | View Replies]
To: Gaffer
Heard a guy on the radio today discussing the 2nd. He pointed out that Hitler was elected and then began his march towards ternary
He also talked about the Jews in the Warsaw ghetto who knew the government was coming for them but picked up what ever arms they could find and held off the Germans and killed quite a number of them. His point was that citizens should be armed.
11 posted on 01/04/2013 11:53:14 AM PST by reefdiver
[ Post Reply | Private Reply | To 2 | View Replies]
To: WonkyTonky 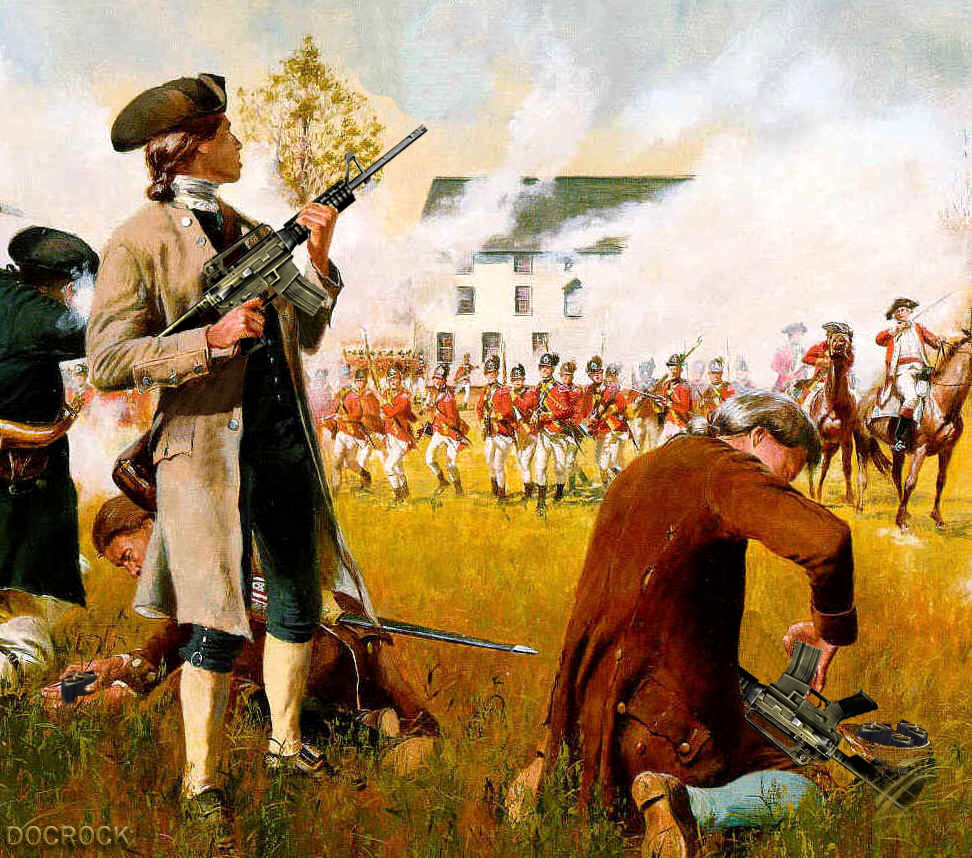 Not about the type of weapon, but the ability to match force.

The higher tech of the militia was the rifle! Smaller caliber, but able to knock an officer off his horse, whack a cannon lighter, or kill a lead team horse from well beyond musket range.

If one really wanted to know what the Founders thought its quite easy to find out. They left volumes on the subject.

Good one, saving to disk.

Yes, the primary focus of recognizing the natural right/God given right codified by the Second Amendment is every citizen’s right to own and use firearms and other arms to deter and stop tyranny, from government and other such groups. This right also includes use of weapons for self defense, our selves and those we need to protect, recreation. hunting, collecting and all uses not in furtherance of a crime [crime in the old sense, not littering or failure to separate recyclables].

Perfectly said. Only those with a European mind-set , where an elite ruled guarded by police forces and military at its beck and call fail to understand this. Ironically, these same characters failed to understand that we had so much trouble subduing Iraq because Saddam had flooded the country with weapons. My son spent a year patrolling Bagdad, rounding up weapons and almost every household had multiple weapons. Aghanistan represents a similar problem, because the men are so inured to violence that All some Gideon has to do is to issue a call to arms and he has a fighting band to serve him.

Assuming that was your intended meaning, the same march is being started by the current regime. That renders the Second Amendment more critical to our survival than at any other recent time.

“....rights of the individual to be equally armed as military, both foreign and domestic....”

.
Then why can I not have fully automatic firearms and an Abrams tank parked in my garage would make me feel more secure.