1. You refine heroin for a living, but you have a moral objection to beer.

3. You have more wives than teeth.

4. You wipe your butt with your bare left hand, but consider bacon “unclean.”

5. You think vests come in two styles: bullet-proof and suicide.

6. You can’t think of anyone you HAVEN’T declared Jihad against.

7. You consider television dangerous, but routinely carry explosives in your clothing.

8. You were amazed to discover that cell phones have uses other than setting off roadside bombs.

9. You’ve often uttered the phrase, ” I love what you’ve done with your cave.”

10. You have nothing against women and think every man should own at least one.

11. You bathe at least monthly whether necessary or not.

12. You’ve ever had a crush on your neighbor’s goat.

13, You worship a rock and are determined to make the whole world worship your rock.

There is something very frightening about a world in which millions of people will play stinkbug, with their buts in the air, several times a day, pointing towards a small meteorite that fell thousands of years ago -

It illustrates that millions of people can be duped into believing anything - and when that belief is without reason, you have millions of robots who will do whatever they are told.

[xx]. You envy all male infidels because of their large penises. Especially Americans. Janet Reno included.

Apparently, this POS thing floats. Some pumice chipped from the remains of a Roman bathhouse perhaps? 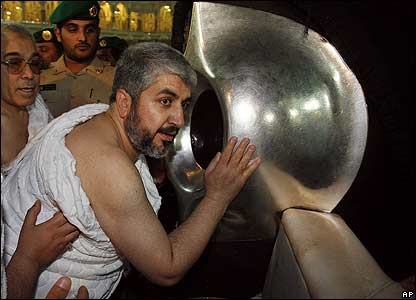 Thanks these are great! :)

Give the Taliban a break...

If all bars served no alcohol and all the women were covered from head to toe in a Burqa, you’d want to strap a bomb on yourself too.

14. You’d rather have your daughter raped than have an education.

15. You’d rather rape your daughter than let your brothers do it first.

You think an assault with fifty men and machine guns against a US Stryker Brigade may be successful.

ok i ll bite. what is he looking at?

meaning that little window is looking in at the metoerite in the black tent that they walk around? how big is it?

And then stone her to death for being “unclean.”

“...the meteorite in the black tent that they walk around? how big is it?”

It appears to be the size of a bar of soap. Can you imagine the game of “keep away” they could have with it? God forbid one of them should let it fall to the ground.

17. Your mother would be happier if you blew up into a million pieces.