LONDON, Aug 7 (Reuters) - Reuters withdrew all 920 photographs by a freelance Lebanese photographer from its database on Monday after an urgent review of his work showed he had altered two images from the conflict between Israel and the armed group Hizbollah.

Global Picture Editor Tom Szlukovenyi called the measure precautionary but said the fact that two of the images by photographer Adnan Hajj had been manipulated undermined trust in his entire body of work.

"There is no graver breach of Reuters standards for our photographers than the deliberate manipulation of an image," Szlukovenyi said in a statement.

"Reuters has zero tolerance for any doctoring of pictures and constantly reminds its photographers, both staff and freelance, of this strict and unalterable policy."

The news and information agency announced the decision in an advisory note to its photo service subscribers. The note also said Reuters had tightened editing procedures for photographs from the conflict and apologised for the case.

Removing the images from the Reuters database excludes them from future sale.

Reuters ended its relationship with Hajj on Sunday after it found that a photograph he had taken of the aftermath of an Israeli air strike on suburban Beirut had been manipulated using Photoshop software to show more and darker smoke rising from buildings.

An immediate enquiry began into Hajj's other work.

It established on Monday that a photograph of an Israeli F-16 fighter over Nabatiyeh, southern Lebanon and dated Aug 2, had also been doctored to increase the number of flares dropped by the plane from one to three.

"Manipulating photographs in this way is entirely unacceptable and contrary to all the principles consistently held by Reuters throughout its long and distinguished history. It undermines not only our reputation but also the good name of all our photographers," Szlukovenyi said.

"This doesn't mean that every one of his 920 photographs in our database was altered. We know that not to be the case from the majority of images we have looked at so far but we need to act swiftly and in a precautionary manner."

The two altered photographs were among 43 that Hajj filed directly to the Reuters Global Pictures Desk since the start of the conflict on July 12 rather than through an editor in Beirut, as was the case with the great majority of his images.

Filing drills have been tightened in Lebanon and only senior staff will now edit pictures from the Middle East on the Global Pictures Desk, with the final check undertaken by the Editor-in-Charge, Reuters said.

Hajj worked for Reuters as a non-staff contributing photographer from 1993 until 2003 and again since April 2005. Most of his work was in sports photography, much of it outside Lebanon.

Hajj was not in Beirut on Monday and was not responding to calls. He told Reuters on Sunday that the image of the Israeli air strike on Beirut had dust marks which he had wanted to remove.

Questions about the accuracy of the photograph arose after it appeared on news Web sites on Saturday.

Several blogs, including a number which accuse the media of distorted coverage of the Middle East conflict, said the photograph had been doctored.

LOL. Once again, the Pajama Brigade forces the MSM to admit it's lies! Freedom Forever!

Someone needs to get a quote from Dan Rather.

Sure to be as good as fake-but-accurrate.

4 posted on 08/07/2006 7:52:40 AM PDT by MeanWestTexan (Kol Hakavod Lezahal)
[ Post Reply | Private Reply | To 3 | View Replies]
To: PajamaTruthMafia
"There is no graver breach of Reuters standards for our photographers than the deliberate manipulation of an image," Szlukovenyi said in a statement.

But pictures of staged events are still acceptable.

"his work showed he had altered two images"

2 out of 920 is blatant Reuters BS! They know darn well that he has doctored all of them in some fashion. It maybe as simple as adjusting the light but it's only done to sensationalize the scene and not to show the true scene.

6 posted on 08/07/2006 7:53:10 AM PDT by tobyhill (The War on Terrorism is not for the weak.)
[ Post Reply | Private Reply | To 1 | View Replies]
To: beeler
Several blogs, including a number which accuse the media of distorted coverage of the Middle East conflict, said the photograph had been doctored.

OK - so the pictures have been exposed and handled, now fix the the printed coverage, Reuters...

7 posted on 08/07/2006 7:53:18 AM PDT by CheneyChick
[ Post Reply | Private Reply | To 2 | View Replies]
To: PajamaTruthMafia
There is no graver breach of Reuters standards for our photographers than the deliberate manipulation of an image

Yeah, we know about Reuters standards. They finally got hauled on the carpet over ONE guy. Now, to go after the others.

Reuters should post all of the pictures on a special website for all to see and investigate. Reuters shouldn't be allowed to self police...they cannot be trusted.

Withdrawing the photos sounds like a "clean-up" effort, but I really doubt that is the actual purpose.

I suspect Reuters wants to make it harder to find more of the fakes this guy is responsible for. Find too many fakes and people might start looking at OTHER Reuters stuff as well...

10 posted on 08/07/2006 7:54:44 AM PDT by EternalHope (Boycott everything French forever. Including their vassal nations.)
[ Post Reply | Private Reply | To 1 | View Replies]
To: PajamaTruthMafia
Removing the images from the Reuters database excludes them from future sale.

11 posted on 08/07/2006 7:55:17 AM PDT by dinasour (Pajamahadeen and member of the Head SnowFlake Committee)
[ Post Reply | Private Reply | To 1 | View Replies]
To: PajamaTruthMafia
It seems it isn't just this particular Reuters photographer -


Either this woman is the unluckiest multiple home-owner in Beirut, or something isn't quite right.

A Lebanese woman wails after looking at the wreckage of her apartment, in a building, that was demolished by the Israeli attacks in southern Beirut July 22, 2006. REUTERS/Issam Kobeisi 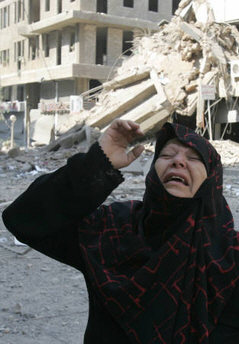 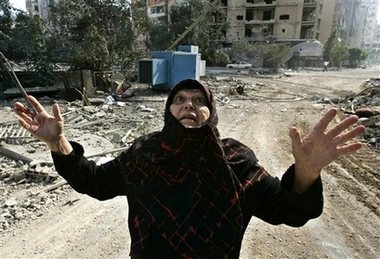 A Lebanese woman reacts at the destruction after she came to inspect her house in the suburbs of Beirut, Lebanon, Saturday, Aug. 5, 2006, after Israeli warplanes repeatedly bombed the area overnight.(AP Photo/Hussein Malla)

Same clothes, same scar on her left cheek, same mark under her right eye. Two pictures of the same woman, maybe even taken on the same day. So, what gives?
12 posted on 08/07/2006 7:55:22 AM PDT by Republican Red (Everyone is super stoked on Gore, even if they don't know it)
[ Post Reply | Private Reply | To 1 | View Replies]
To: PajamaTruthMafia

"Reuters has zero tolerance for any doctoring of pictures"
Does that mean Reuters tolerates staged pictures??

Does anyone know of or have the other doctored picture?

MSM: "But we've been doing this for ever, even the soldiers raising the flag on Iwo Jima is staged..."

And now Rooters needs to start investigating the commentary that went along with the fake pictures.

Needs a different qualifier than 'deliberate'. All news media published images are manipulated to some degree.

Down the memory hole.

The damage has already been done. Reuters should have screened this guys work before publication. Most of his photos look staged or "sensationalized."