Oetzi, the prehistoric man frozen in a glacier for 5,300 years, could have been infertile, a new study suggests.

Genetic research, published in the American Journal of Physical Anthropology, also confirms that his roots probably lie in Central Europe.

Oetzi's body was found in the melting ice of the Schnalstal glacier in the Italian Alps in 1991.

Examination of his remains has already revealed the Copper Age man almost certainly died as a result of a fight.

The assessment is based on the presence of an arrowhead that is lodged in his back and extensive cuts to his hands.

The scientists behind the latest genetic research now speculate that Oetzi's possible sterility could have been a factor that led to this violent end.

In particular, they looked at the genetic material contained in mitochondria, tiny structures that provide power to cells. This type of DNA is passed only down the maternal line.

The team says it found areas that are linked to an increased chance of male infertility.

"We screened sites [of the DNA] which have been described by other scientists as being linked to other pathologies or environmental adaptations," Dr Rollo said.

"A couple of these sites have been described as being linked to reduced sperm mobility and we found both on Oetzi's mitochondrial DNA," he told the BBC New website.

"We cannot say for certain that he was suffering from this [reduced sperm mobility], but there is a chance."

Dr Rollo said the idea that Oetzi might have been infertile was intriguing, and while emphasising that this was purely speculation, he noted it would be interesting to pursue the idea further.

"At the moment, purely as a matter of speculation, I am in touch with some cultural anthropologists, medical anthropologists and archaeologists to obtain information on what this [male infertility] could have meant in primitive society," he added.

"One would have to investigate whether there was an awareness of male infertility in this ancient society; and if so, whether the lack of a family or clan could represent a kind of social weakness."

At first it was thought Oetzi had died from exposure to the cold, but the wounds on his hands and the arrowhead would seem to indicate he died as a result of injuries he received in a fight.

Given the suggestion that Oetzi may have been infertile, Dr Rollo wondered whether the social implications of this could have played a role in the chain of events that led to a confrontation.

The team also looked at patterns in Oetzi's DNA to try to establish more information about his roots.

The scientists discovered that he belonged to the K1 subdivision of the haplogroup known as K.

Haplogroups can be described as the branches of the human genealogical tree. Each haplogroup corresponds to early human migrations to the various continents or geographical regions.

ANCIENT HUMAN DNA The DNA within our cells contains the genetic information that spells out the "code of life" It is wound up in bundles known as chromosomes that are found in the cell nucleus (nuclear DNA); DNA also lies within mitochondria outside of the nucleus (mtDNA) mtDNA is inherited only through females via the egg and can be used to trace backwards through evolution; the male sex chromosome (Y) similarly tracks male evolution DNA breaks down over time making recovery difficult from ancient specimens. Fossils are often contaminated with modern human DNA during handling, and it is difficult to tell this apart from ancient DNA K is a comparatively rare haplogroup amongst Europeans, but it has higher frequencies in populations in Ladin in the south of the Alps, and also the Oetzal area to the north.

But Dr Rollo cautioned against the certainty of these results because knowledge of the group's distribution is still poor and there are only small population samples to compare with it.

The researchers also found that Oetzi belonged to a fourth subcategory of the K1 group that had previously not been seen.

"This means that our analysis of the mummy's mitochondrial DNA is more detailed than the average analysis done on modern populations," said Professor Rollo.

Dr Mim Bower, an archaeogeneticist from the McDonald Institute at the University of Cambridge, UK, commented on the research: "This is an interesting paper and shows how valuable mitochondrial DNA can be.

"From the point of view of ancient DNA, it is extremely useful because each cell has lots of mitochondria in it, and therefore lots of copies of mitochondrial DNA, which gives you a much better chance of recovering it after several thousand years of DNA decay."

But Dr Bower pointed out that it can also have limitations.

"What it does not do is give us a complete picture. Because mitochondrial DNA is passed through the maternal line, what we are actually looking at is Oetzi's mother, and grandmother, and so on. We are only seeing the female line," she said.

"With nuclear DNA can we build a more complete picture, but this is very hard to extract from such ancient specimens." 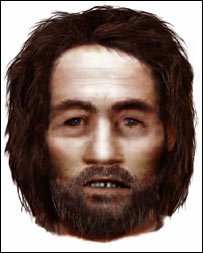 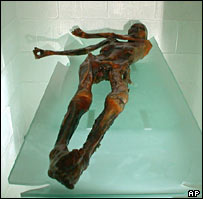 So all his kids were the mailman's?

Hmmmm.... He looks familiar. Sort of like Warren Beatty.

I'm betting that this guy was killed in a war.

This ice man's gene could be the the cause of Frigidity. I thnk my ex is a carrier.

7 posted on 02/03/2006 12:21:18 PM PST by Red Badger (...I will bless them that bless thee and those who curse thee I will turn into Liberals..........)
[ Post Reply | Private Reply | To 6 | View Replies]
To: Red Badger
The scientists behind the latest genetic research now
speculate that Oetzi's possible sterility could have
been a factor that led to this violent end.

In other words, his wife killed him.

"Hmmmm.... He looks familiar. Sort of like Warren Beatty."

He looks middle eastern. An early version of an islamic fanatic, perchance. An islamic shooting blanks! Bet the cartoonists good have a field day with that idea.

Although the iceman cometh, methinks he shooteth blanks.