A pig's head thrown into a mosque with the words "The Prophet Muhammad" written on it is stirring deep tensions here, with a popular extremist sheik today threatening an Arab revolt and Jewish Temple Mount activists calling on Arabs to be expelled from the country.

The pig's head, which was covered in a black-and-white checkered kaffiyeh, that is an Arab headdress, was thrown last week into the Hassen Bek Mosque of Jaffa, just outside Tel Aviv. The pig is regarded by Muslims and Jews as an unclean animal, and has been previously used in incidents here that have inflamed religious passions.

A Tel Aviv couple arrested today admitted to placing the pig in the mosque in hopes, they said, of instigating area Muslims to riot in order to derail the Gaza evacuation plan, which was at its height during the incident. Police found a second pig's head in the suspects' home refrigerator. The couple said they were planning to repeat the attack.

The intended consequences of the pig's head placement may already be playing out.

At prayer services inside the Hassen Bek mosque today, Sheikh Raed Salah, head of the Islamic Movement, a Palestinian Temple Mount activist group, called on Arabs to revolt against the Israeli government.

He warned Jews will take advantage of the atmosphere created by the swine incident to attack the Al Aqsa Mosque.

"The establishment is trying to get rid of al-Aqsa. The Zionists won't rest until there is an ugly attack [against it]. That would be very dangerous."

Salah, who was recently released from prison, has been accused by Israel of receiving funds from organizations related to terror groups, including Hamas. He said Muslims must defend Al Aqsa from "evil Jewish designs."

David Haivri, chairman of Revava, a Temple Mount activist group regularly targeted by Salah's public comments, told WND, "Indeed, the Temple Mount should be returned to the control of the Jewish authorities, but it should not be done with any attacks or violence. The Mount is the holiest place for Jews. Muslim control of the site and restrictions on Jewish prayer is not acceptable. Jews should make a pilgrimage to the Temple Mount and show we want it back."

Haivri added, "I think now that [Israeli Prime Minister Ariel] Sharon conducted his first stage in a population exchange with the Gaza withdrawal, he should complete it by sending in the same military forces to get out the Muslims from our country. They have 22 other large Arab countries to live in."

Reacting to Haivri's sentiment, Salah warned, "Anyone who thinks they can get us to leave our land had better prepare a million coffins for Palestinians in this country. We were born in this land, and we will die in this land. From here we will meet Allah."

Salah said his Islamic Movement will set up 24-hour-a-day guard units to secure Muslim holy sites in Jaffa, Ramleh and Lod, including at the Hassen Bek Mosque. Hassen Bek was the scene of Israeli-Arab violence at the start of the Palestinians' 2000 intifadah.

Anti-Muslim crimes in Israel involving pigs are usually punished severely. In 2001, an activist was sentenced to two and a half years in prison for placing a pig's head on the grave of a militant sheikh in a Muslim cemetery.

In June, tensions rose sharply in Gaza after local Arabs found graffiti on a wall that read "Muhammad pig."

TOPICS: News/Current Events
KEYWORDS: terror Navigation: use the links below to view more comments.
first 1-20, 21-40, 41-60, 61-66 next last
1 posted on 08/26/2005 5:23:41 PM PDT by ChristianDefender
[ Post Reply | Private Reply | View Replies]
To: ChristianDefender
Fur Shur, both the Moslems and the Jews should be admonished to shut up with the meaningless, needless insults to that bastion of the Corn Belt's economic security ~ the pig.

And quit playing with their food anyway.

Now now. Muhammed wasn't a pig, he was a pedophile. Everybody calm down.

We need that kind of grass-roots movement here. 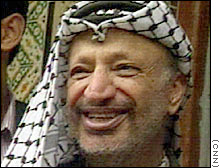 Wouldn't want to be inflammatory with a little pork, now. No, sirree.

7 posted on 08/26/2005 5:29:33 PM PDT by martin_fierro (Casey Sheehan died so mommy could freely act the jackass)
[ Post Reply | Private Reply | To 1 | View Replies]
To: ChristianDefender
A pig's head thrown into a mosque with the words "The Prophet Muhammad" written on it

That is one ugly pig.

9 posted on 08/26/2005 5:38:44 PM PDT by magslinger (They called Israel the land that GOD Himself gave his Chosen People the Jews.)
[ Post Reply | Private Reply | To 6 | View Replies]
To: ChristianDefender
What were they thinking with this stunt? It doesn't accomplish anything for anyone. It only makes the Muslimes more angry and helps their cause by showing how "evil" the Jooos are.

Ha, eating a pork sausage as we speak. Yum!

Where does one find a pig in the Mideast?

12 posted on 08/26/2005 5:44:06 PM PDT by LoneRangerMassachusetts (Some say what's good for others, the others make the goods; it's the meddlers against the peddlers)
[ Post Reply | Private Reply | To 1 | View Replies]
To: ChristianDefender
"Anyone who thinks they can get us to leave our land had better prepare a million coffins for Palestinians in this country. We were born in this land, and we will die in this land. From here we will meet Allah."

They call these people who threw in a Pigs head Terrorists , while they call Palestinians who commit suicide bombing Freedom Fighters.

14 posted on 08/26/2005 5:45:14 PM PDT by sgtbono2002
[ Post Reply | Private Reply | To 1 | View Replies]
To: ChristianDefender
Reacting to Haivri's sentiment, Salah warned, "Anyone who thinks they can get us to leave our land had better prepare a million coffins for Palestinians in this country.

As far I concerted this it the funeral dirge I want played for Bin Laden and all the Al Q knuckle heads
16 posted on 08/26/2005 5:47:53 PM PDT by tophat9000
[ Post Reply | Private Reply | To 1 | View Replies]
To: sgtbono2002
I am inflamed by this act. I like pigs and think they are purer than Allah. If I had pigs (there's always hope), I am gonna fill their cute little sty with shredded pages of the Quran.

Christians could be vicious and sometimes warlike but honor and morality remains... if we do the other way we would just be acting like the muslims as well..

I guess "you can't put lipstick on a pig" made for a better pic than "you can't polish a turd."

generally speaking, under any kaffiyeh.

Guess it must have been Boar's Head Brand.