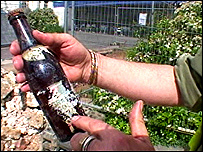 The bottles were in good condition, but the liquid inside was not

Archaeologists searching for remains of a city's medieval past have made an intoxicating discovery - a cache of World War II beer. The hundred-or-so bottles of lager buried beneath Southampton's Guildhall Square were still capable of developing a head when they were opened.

It is thought they had been stored in the cellar of an off-licence which was destroyed in the Blitz.

The routine dig was to study the site before a new arts centre was built.

Pete Cottrell, the dig leader, was hoping to find evidence of a medieval leper hospital known to have been in the area.

He said the bottles were in very good condition, but the liquid inside was not.

"I think you'd be very ill if you drank that, it's absolutely rank."

Some of the bottles have now been handed to the city's museum, while the rest has been reburied.

Beer is not meant to age well.

Born on date wow way back then

Blam how the heck are you, dogs ok?

Must have been really rank if they felt they had to rebury them.

I have to agree with the above poster, beer does not age well. It's best when fresh. Now if it had been wine that was buried.. mmmmmm now that would have been something to find as long as it hadn't gotten hot.

But it is an interesting find.
Wonder what else they managed to find besides the bottles?

I'm doing fine...dogs are hot, can't get them to go into the AC dog house.

Heck, I've been known to drink some horrible gunk.


I'm still trying to figur eout WHY they reburied the rest of the bottles when they're going to be constructing things on that site soon.

They should have a look in my fridge.

Too bad it wasn't wine. Beer gets skunky after about 3 months or so

I've had a bottle of Coors in a fridge for the past 4 years and 11 months (long story).

That is not true. I brewed for years, and my beer continued to improve with age like a fine wine. Brewing beer to a high gravity (i.e., strong) makes the beer "able to look after itself". Some beers (for example, Gale's Old Ale or Thomas Hardy's Ale) shouldn't be drunk until they've spent at least 25 years in the bottle.

Beer gets "skunky" because of exposure to ultraviolet light; it has nothing to do with age. Properly brewed strong beer is good in the bottle for decades, as long as the bottler was sanitary.

"Does English beer improve with age? I ask because Lone Star is best fresh,"

Why are comparing Lone Star to beer?